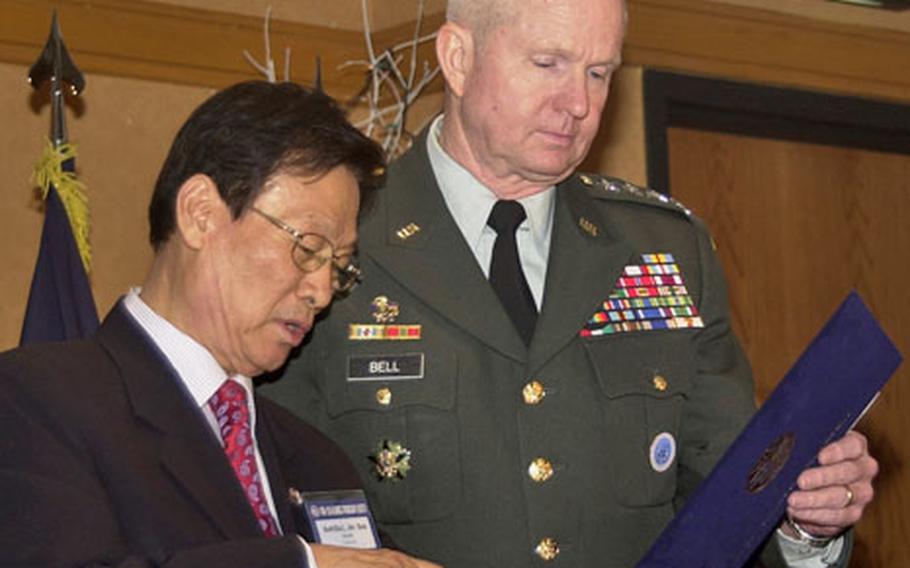 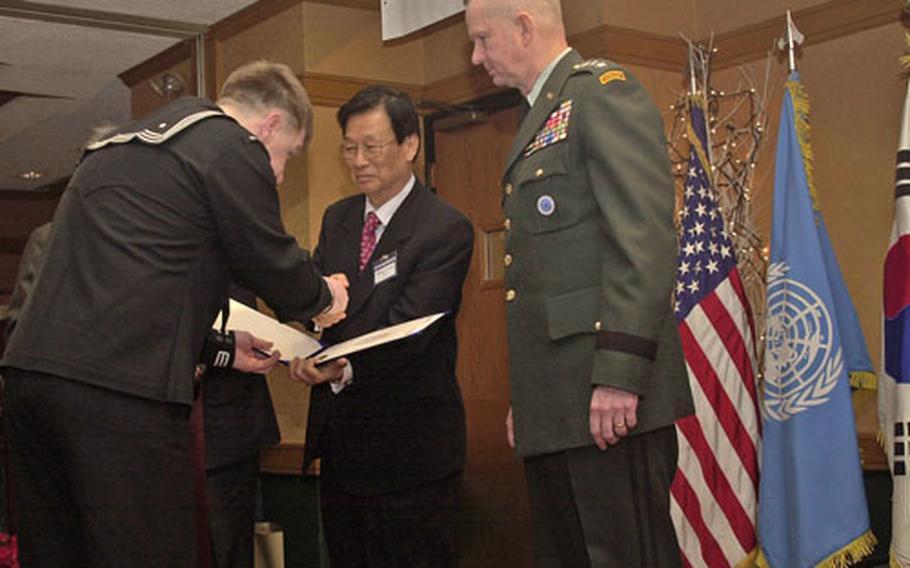 The name was selected partially on the phonetic sound of Bell&#8217;s name in English, but also for the &#8220;character of his personality,&#8221; according to a speech at the event in the Dragon Hill Lodge.

Baek signifies the color white, a symbol of purity; Bo means to preserve or protect; and guk means country.

&#8220;Gen. Bell&#8217;s Korean name ... is very appropriate because he has protected the Republic of Korea and strengthened the blood alliance between&#8221; the two countries, according to the speech.

Bell said receiving his name was a &#8220;great lifelong honor,&#8221; especially given the fact he celebrated his 60th birthday this year in South Korea.

Announcing Bell&#8217;s Korean name was just one part of the event, held annually to thank the enlisted troops.

Forty enlisted members &#8212; including sailors, airmen, soldiers and Marines &#8212; were handpicked to represent the nearly 28,000 U.S. troops in South Korea.

Suh thanked those troops in his opening address, telling them it was wonderful to gather to congratulate them.

&#8220;We should never forget that the growth in democracy and our economy is grounded in dedication and sacrifice of U.S. soldiers,&#8221; he said. &#8220;I wonder if the young generation of Koreans are truly thankful for these sacrifices and mindful of the true history of our country?&#8221;

And Kim Sang-tae, chairman of the Korea Retired General and Admiral Association, also thanked the troops for &#8220;doing your duties&#8221; in a foreign country.

Bill Stanton, the deputy chief of mission at the U.S. Embassy in Seoul, also spoke at the event.

Stanton called the troops the &#8220;true foundation of this great partnership,&#8221; but added that support from organizations such as the Friendship Society is what &#8220;cements that foundation.&#8221;

Bell, however, wondered what the future will bring.

Even though the two nations are culturally different, Bell said, they both value freedom, democracy, a free-market economy and diversity, and both have &#8220;transcended our cultural differences.&#8221;

Eighth Army commander Lt. Gen. David Valcourt also was honored with a certificate of the 4th honorary grade of black belt in tae kwon do.