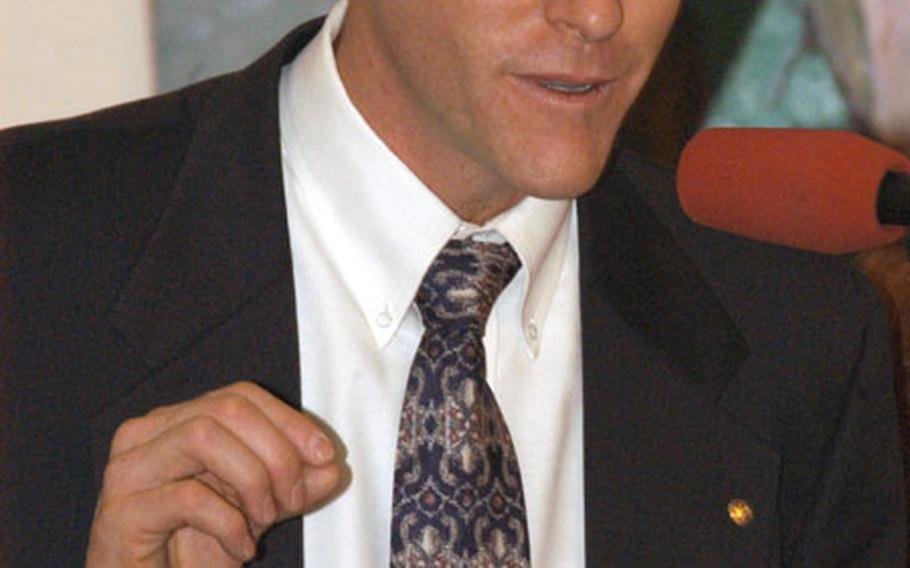 Chris Bragdon of Friends of Bosnia talks about the projects accomplished in Tuzla, Bosnia and Herzegovina, when government, volunteers from local nongovernmental organizations and businesses united to fix up parks and create jobs. (Ivana Avramovic / S&S)

TUZLA, Bosnia and Herzegovina &#8212; When Chris Bragdon first came to this city in late 1996 he had stars in his eyes and wanted to give money to help people recovering from war.

But he soon learned that providing an opportunity to earn money is much more fruitful.

&#8220;Straight donations have created a horrible culture of dependence and relying on charity,&#8221; Bragdon said. &#8220;We want to attract foreign investment by sending a message that people here care about their city and are willing to work hard for it.&#8221;

A year ago, Friends of Bosnia, the American-based nongovernmental organization Bragdon works for, started a $135,000 project that brought together Bosnian government, businesses and NGOs. The goal was creating jobs and improving people&#8217;s lives.

About 300 volunteers put in 5,000 hours planting 129 trees, fixing and cleaning parks that became popular hangouts with many Tuzla residents.

The city government provided the trees, volunteers earned credit toward obtaining equipment for their organizations and local businesses received advertisement for donating money.

The first year of the project was completed this month with a party. Bragdon hopes to extend the initiative to the entire region in the coming year.

Various nongovernmental organizations taking part in the project earned some $61,000 for equipment they needed. Among them was a university student group.

&#8220;We had a desire to create something that will be available to people in dorms,&#8221; said Nihad Avdic, president of the group.

&#8220;We tried looking for donations, but we figured out that nothing will come out of that. We simply had to earn that with our work to survive as an organization.&#8221;

They earned enough credits to receive 10 computers, some printers and scanners. Opening an Internet club, the group became self-sufficient, and also earned money to buy a hearing aid for a fellow student and to sponsor its own sports team.

While Friends of Bosnia has raised money in America and applied for grants, families of U.S. peacekeepers also are pitching in.

Families collected hundreds of boxes of clothing and blankets. But sorting and distributing the donations to many little communities would add another task to the troops already heavy workload.

Through a Family Readiness Group in Minnesota, Nicole Ledoux, wife of Sgt. Mark Ledoux of the 2nd Battalion, collected $3,400 for Friends of Bosnia.

&#8220;We basically just do what soldiers want us to do [with that money],&#8221; Bragdon said. He then sent photos of what was accomplished to families.

U.S. troops also helped when a police chief would not allow a multi-ethnic project at a school in eastern Bosnia. A few phone calls from SFOR turned the police chief into a big enthusiast.