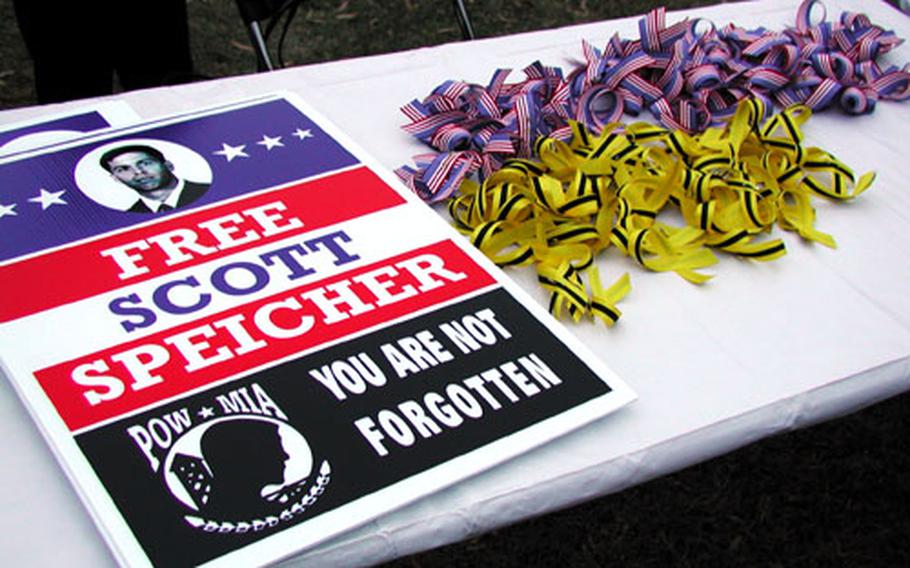 Posters and ribbons are ready for partcipants in Saturday&#39;s Free Scott Speicher rally at the U.S. Capitol. (Joe Gromelski / S&S)

Posters and ribbons are ready for partcipants in Saturday&#39;s Free Scott Speicher rally at the U.S. Capitol. (Joe Gromelski / S&S) 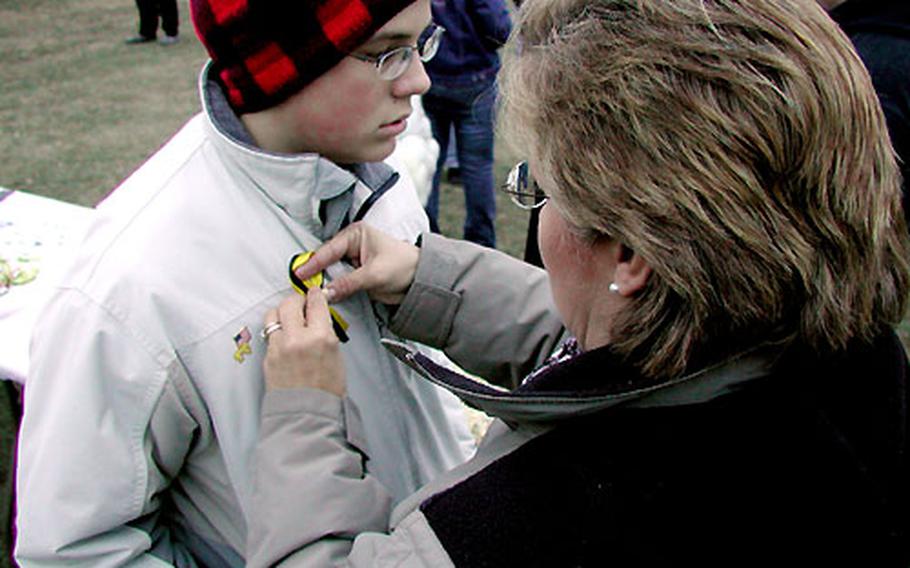 Leslea Amidon pins a ribbon on her son, Trey, before Saturday&#39;s Free Scott Speicher rally at the U.S. Capitol. The Amidons came up from Speicher&#39;s hometown, Jacksonville, Fla., for the rally. (Joe Gromelski / S&S) 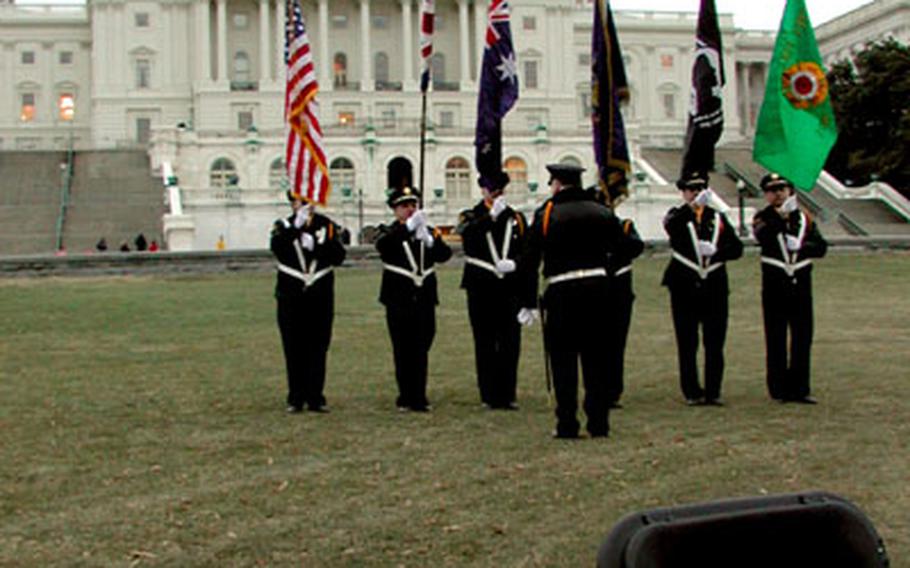 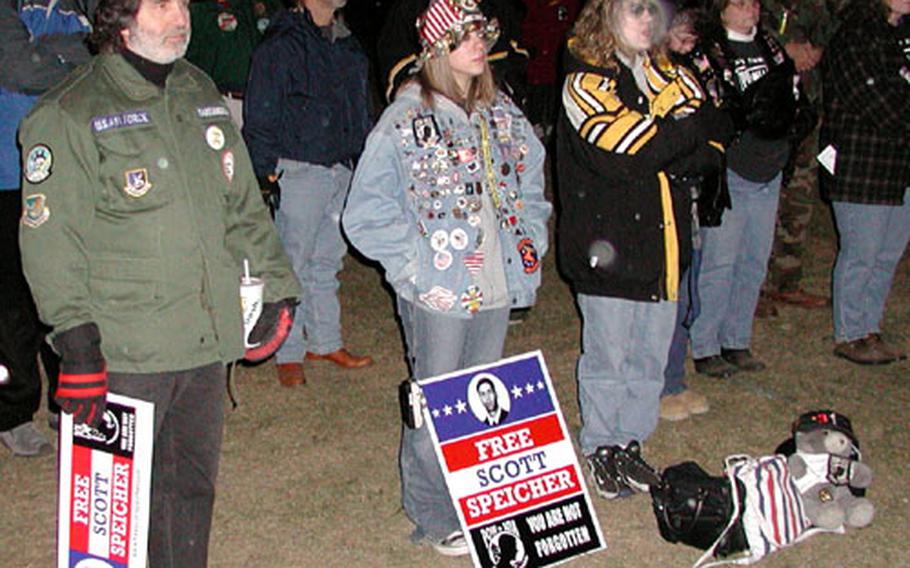 Participants in Saturday&#39;s rally listen to one of the speakers. (Joe Gromelski / S&S) 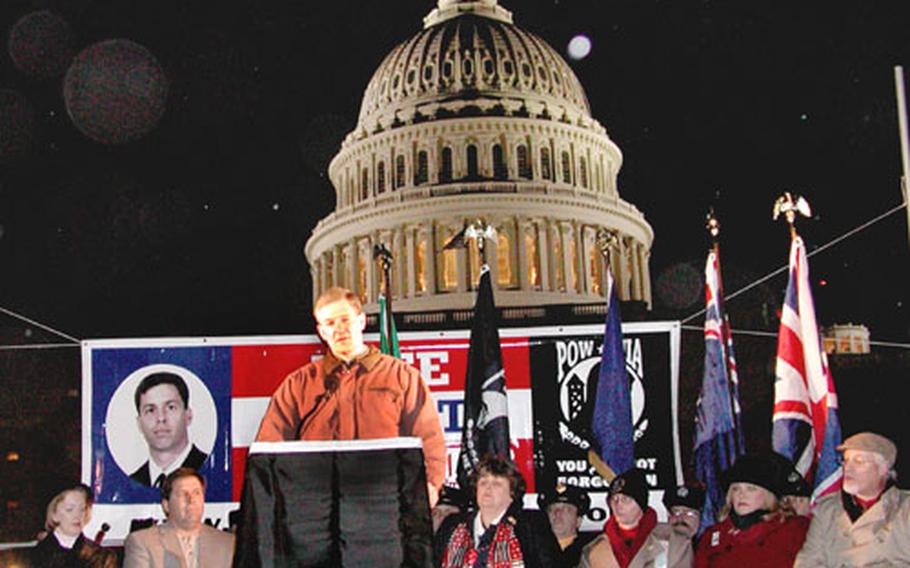 WASHINGTON &#8212; Hope mixed with fear make up the fleeting thoughts of a lost friend that hit Jim Stafford at the oddest of times &#8212; during church, over a pancake breakfast, while showering.

Where is his friend, Scott Speicher? Is he eating well, able to shower, in good health?

But never do Stafford&#8217;s thoughts drift to &#8220;is he alive?&#8221; the 46-year-old Floridian said Saturday at a candlelight vigil held on the western lawn of the U.S. Capitol. Saturday was the 13th anniversary of the Navy pilot&#8217;s disappearance over Iraq. Speicher was 33 when his F/A-18 Hornet was downed by an Iraqi missile over southwestern Baghdad on the very first night of Operation Desert Storm.

Then came a change, evidence Speicher might have ejected and possibly survived.

&#8220;It was shocking news, and it gave us a tremendous sense of hope that we might get him back,&#8221; said Stafford, a high school chum and president of the nearly 2-year-old group Friends Working to Free Scott Speicher Inc.

Then another twist on the emotional roller coaster &#8212; word that a set of initials were found carved into an Iraqi prison wall: &#8220;MSS.&#8221; Could they be those of Michael Scott Speicher? Stafford is convinced his friend of 30 years etched those letters.

The downed pilot&#8217;s friends have held several vigils in his hometown of Jacksonville, Fla., but this is the first national outreach, which drew roughly 75 people to the nation&#8217;s capital to stand in bitter freezing temperatures, at times pelted with sleet and snow, to remember their friend.

&#8220;Why this year? Because this is the first time we have a crew on the ground in Iraq looking for him,&#8221; said volunteer Kelly Jefferson.

In Iraq, the ground search is on.

&#8220;Coalition forces on the ground in Iraq continue the search for information that leads to answers about the status of Captain Scott Speicher, and they won&#8217;t stop until there is closure for his family and his nation,&#8221; Marine Maj. Pete Mitchell, a Central Command spokesman said.

Army Chief Warrant Officer Ronald Young Jr., who was held prisoner for three weeks in Iraq after his Apache Longbow was shot down in March, was slated to speak at the Washington vigil. Young instead attended a memorial service of a friend killed in Iraq when his medical transport helicopter was shot down by insurgents.

His mother, Kaye Young, addressed the group, reading a letter her son had penned. Ronald Young wrote that during his days of captivity, he often thought of Speicher, and each of the seven times he was moved, he searched the walls for any signs the Navy pilot might have been in that cell. He found none.

But they didn&#8217;t gather Saturday to eulogize the downed pilot, said Capt. Tony Albano, Speicher&#8217;s roommate aboard the USS Saratoga 13 years ago. &#8220;Spike would not have wanted us to do that.&#8221; Instead, they spoke of the good things: his contagious smile and his faith.

&#8212; For more information about the Friends Working to Free Scott Speicher Inc., check out the organization&#8217;s Web site at: www.freescottspeicher.com