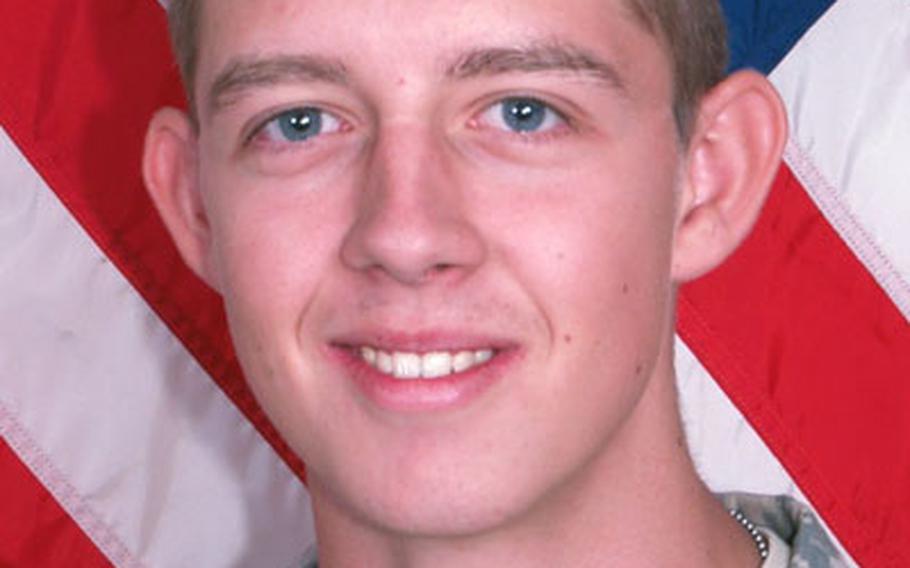 First Lt. Ryan Neely bids farewell to Pfc. Clinton Tyler McCormick during a memorial service Wednesday night at Forward Operating Base Loyalty in Baghdad, Iraq. Neely, a platoon leader for Alpha Company, 2nd Brigade Special Troops Battalion, part of the 2nd Brigade Combat Team, at Fort Carson, Colo., was riding in the back seat of the Humvee when McCormick, the gunner, was killed by a roadside bomb on Dec. 27. (Lisa Burgess / S&S)

BAGHDAD &#8212; Three days before Pfc. Clinton Tyler McCormick died, he talked to his battalion commander about his baby.

McCormick, 20, was talking about his beloved gun, the M240B he manned for his platoon sergeant&#8217;s Humvee, according to Lt. Col. James Wolak, of the 2nd Brigade Special Troops Battalion, part of the 2nd Infantry&#8217;s 2nd Brigade Combat Team.

McCormick, who was on his first Army deployment, died holding his &#8220;baby&#8221; on Dec. 27 in the streets of eastern Baghdad, felled by an armor-piercing roadside bomb.

Wednesday night, McCormick&#8217;s friends and fellow soldiers gathered to remember the soldier they called &#8220;Peanut&#8221; because he looked like the guy on the Planters Peanuts jar, members of his platoon said.

The name fit him so well, even Fuller, as a commander, had to struggle not to call McCormick by his nickname, he said.

McCormick was wiry, standing 5 foot 5 inches and weighing 120 pounds soaking wet, according to his platoon mates. But he was also &#8220;strong as an ox and as hard as nails,&#8221; Fuller said.

Eleven months later, in October, Peanut was in Iraq, where his platoon leader, 1st Lt. Randy Tau, made him his personal Humvee gunner. When told, &#8220;his face became overwhelmed with the pride of a warrior,&#8221; Tau said.

Handling a weapon almost as large as he was, Peanut did that job through 35 combat missions.

Every morning, Peanut would fill a 1&#189;-liter water bottle with black coffee and show up with it in hand, ready for the day&#8217;s work, said Sgt. Gareth Kellogg, one of the company&#8217;s noncommissioned officers. &#8220;I didn&#8217;t think someone that small could physically handle that large a dose of caffeine,&#8221; Kellogg recalled.

Despite his small stature he loved to &#8220;wrassle,&#8221; often playfully tangling with soldiers and NCOs almost twice his size, his friends said.

They might have to pull him out from the bottom of a pile of soldiers, but Peanut always came up with a grin, undefeated.

He is survived by his mother, Lori McCormick, his father, Kevin McCormick, a sister, and brother.