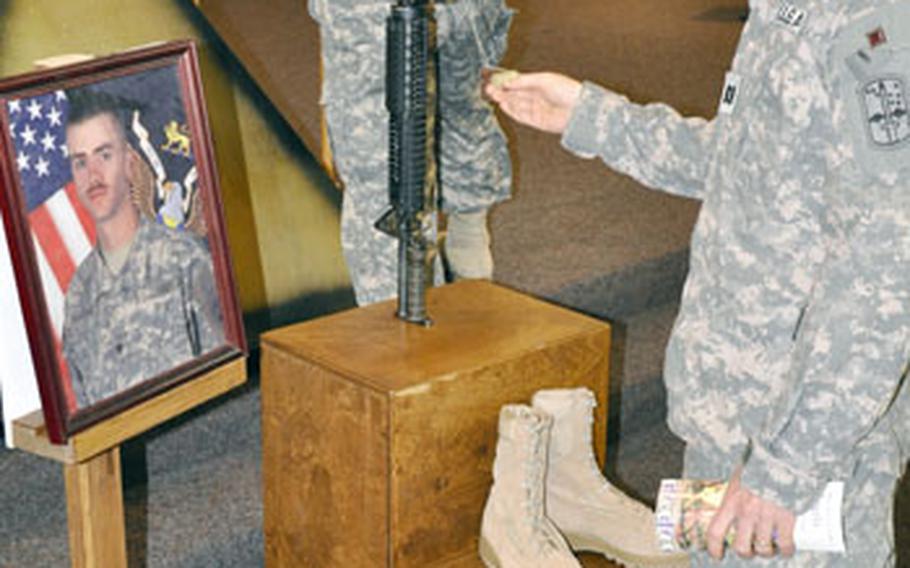 SCHWEINFURT, Germany &#8212; In the late hours of Aug. 18, Pfc. William Z. Van Osdol&#8217;s sister Sabrina sent him a text message urging him to get some sleep for the next day.

"Zack you need to sign off and get in bed because you&#8217;ve got work tomorrow," she messaged him.

Four hours later Van Osdol was killed when a rocket struck his quarters in Diwaniyah, Iraq, according to a news release from the Pentagon. The rocket injured Spc. Joshua Loveland, who was later returned to his unit, according to the unit&#8217;s official statement on the incident.

Members of the Schweinfurt community gathered Tuesday at Ledward Barracks chapel to honor Van Osdol, 23, of Pinson, Ala., who was posthumously promoted to specialist. He was assigned to the Schweinfurt-based Maintenance Support Team from Company B, 172nd Support Battalion, 172nd Infantry Brigade.

During the ceremony, Chaplain (Lt. Col.) Steve Horning read comments from Van Osdol&#8217;s sister in which she recalled the text messages that were her last contact with him.

She noted that family members called him by his middle name, Zachary. His first name, William, belonged to his dad, who died in mid-April. Van Osdol was in Iraq at that time.

"He was Zack to me and Uncle Zack to my boys," said Sabrina, adding that her boys idolized him.

Van Osdol&#8217;s classmates and teachers at Pinson Valley High School called him by another name.

He treated everybody like family, and whenever he was in skits, playing music for friends or sharing comic books, he called himself "Uncle Will." So his classmates called him Will.

Four days ago in Pinson Valley, Ala., hundreds lined the streets to honor Will as the motorcade carrying his casket passed by on the way to the grave site. He was the third Alabama servicemember to die in Iraq this year.

"Tell them I pray every day for them that they return safely to their families. Please tell them thank you for being friends to my little brother," she said.

Apart from Sabrina, Van Osdol is survived by his mother, Susan, and another sister, Brandi.