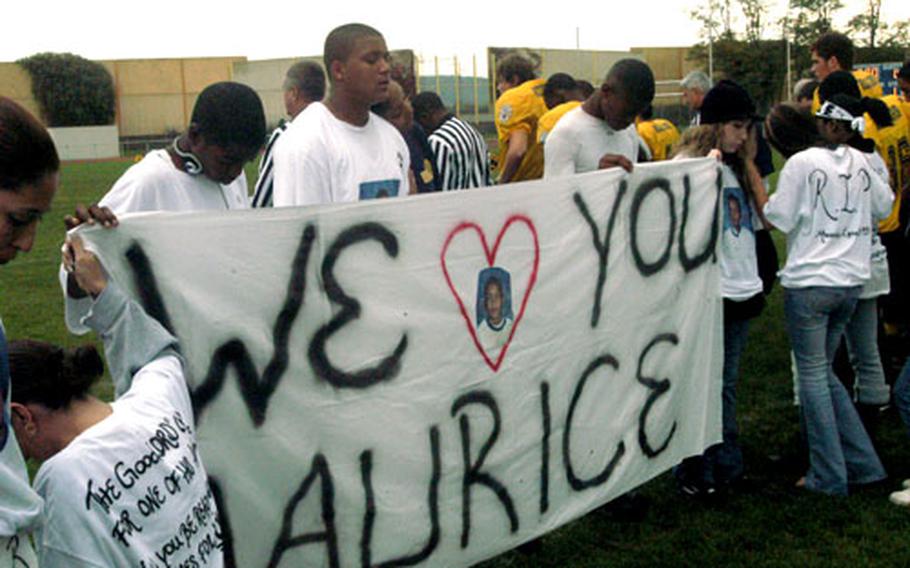 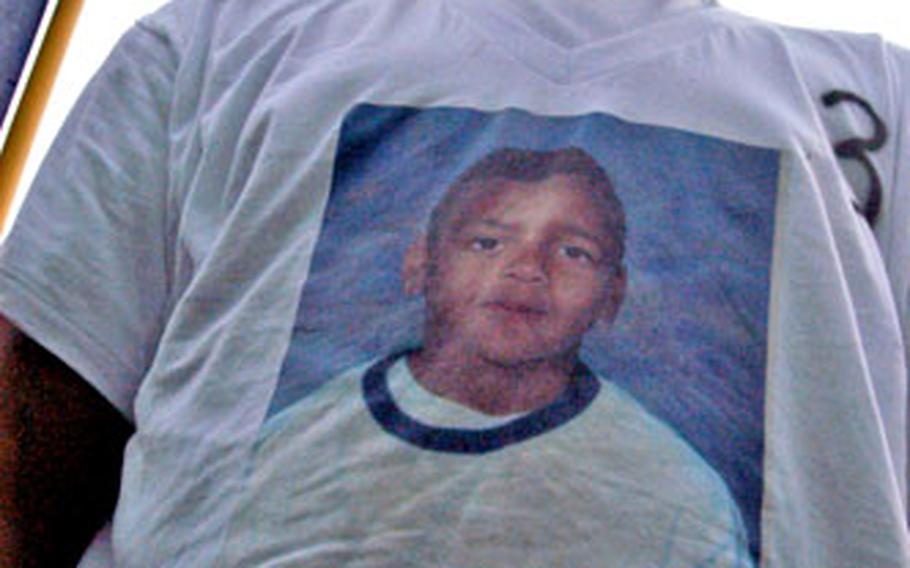 James Long III, whose brother, Maurice, is pictured on the T-shirt, said, “I just know that he knows how much we care for him and love him and miss him.” (Charlie Coon / S&S)

HEIDELBERG, Germany &#8212; James Long Jr. and his wife, Andrea, couldn&#8217;t bring themselves to go to the homecoming game where their son, Maurice, was being honored.

They wanted a chance to cry while not in the presence of their other children.

Friends wearing custom-made T-shirts with Maurice&#8217;s likeness honored the 12-year-old on Saturday with a moment of silence before the Heidelberg-Gen. H.H. Arnold high school football game at Patrick Henry Village.

Maurice, a seventh-grader at Patrick Henry Middle School, was killed Wednesday at the end of the Heidelberg High School homecoming parade. According to witnesses, he was run over by a flatbed truck carrying the ninth-grade prince and princess and other students.

Maurice was aboard a non-motorized scooter and holding on to the side of the truck when he fell under the truck, witnesses said. People aboard the truck were throwing candy to spectators, and some kids were gathered around the still-moving truck as the parade ended.

Maurice died on the scene, witnesses said. A German police report said it appeared he hit his head on the curb, but the exact cause of death was not known pending autopsy results.

James Long Jr. said the family went to church every Sunday. On Monday, they read together a verse from the Bible. Asked which verse, he went to his Bible and found Maurice&#8217;s school pencil still marking the page.

The father, a warrant officer 3 at Headquarters and Headquarters Company, V Corps, said when he asked his 4-year-old daughter, Anna, if she realized when she&#8217;d next see her brother, she replied, &#8220;When I get to heaven.&#8221;

Maurice&#8217;s grieving friends built a small shrine for him outside the middle school and held a candlelight vigil on Thursday.

Maurice loved Philadelphia 76ers star Allen Iverson, the singer Beyonce and barbecue-flavor sunflower seeds. Most of all, he loved basketball.

His older brother said the Heidelberg community has been helpful, especially toward a family that had been in town for only six months after spending three years in Fort Campbell, Ky.

A disconsolate James Long Jr. said that parents should never outlive their children.