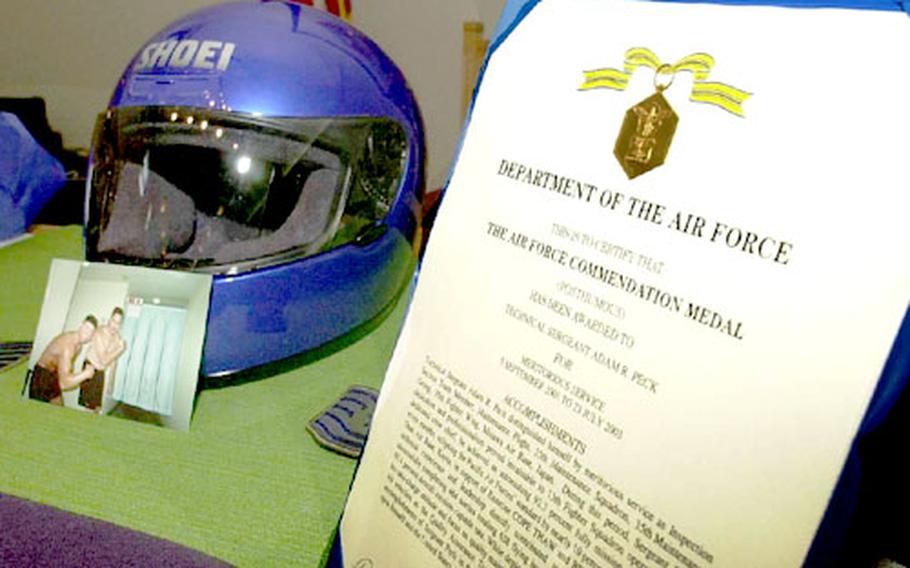 The Air Force Commendation Medal citation, at right, and a motorcycle helmet were displayed on a table during Tuesday’s memorial service at Misawa Air Base, Japan, for Tech. Sgt. Adam Peck, 27, who was killed in a July 23 motorcycle accident in Misawa City. (Wayne Specht / S&S)

MISAWA AIR BASE, Japan &#8212; During a memorial service at the base chapel here Tuesday, friends and co-workers remembered Tech. Sgt. Adam R. Peck as a charismatic person who would not let those around him &#8220;have a bad day.&#8221;

Peck, 27, was an inspection team member with the 35th Maintenance Squadron. He died July 23 in a Japanese hospital after his motorcycle collided with a truck at a city intersection about a mile from the base.

More than 200 people &#8212; most of them battle dress uniform-clad members of Misawa&#8217;s maintenance community &#8212; filled pews in the chapel, where a motorcyclist&#8217;s helmet, along with Peck&#8217;s desert-shade BDUs and chevrons, were displayed on a table at the altar.

Several of Peck&#8217;s associates offered remembrances of the sergeant, their voices occasionally overtaken by the roar of F-16 aircraft taking off from the base runway, the same fighter that Peck had served as a crew chief.

Foster marveled at how Peck, who entered the Air Force in 1994, had been promoted to the rank of technical sergeant in just eight years.

In the 16th hour of a recent base wartime-exercise shift, Hooks said despite weariness among fellow co-workers, Peck had a way of looking at the positive side of their station in life.

Senior Airman Robert Nugen, another of Peck&#8217;s squadron co-workers, read from a letter he sent to Peck&#8217;s parents describing how he benefited from knowing the sergeant for a brief time.

During his Misawa tour, Peck deployed with the 13th Fighter Squadron to Saudi Arabia for Operation Southern Watch and to Osan Air Base, South Korea, for Cope Thaw and Beverly Bulldog exercises.

During Tuesday&#8217;s service, Peck was posthumously awarded the Air Force Commendation Medal for meritorious service covering the period since he arrived at Misawa on Sept. 5, 2001.

Especially noteworthy was the mission capable rate of 92.3 percent for his F-16 aircraft over a seven-month period, a rate that eclipsed the Pacific Air Forces standard by nearly 10 percent, the citation noted.

Peck hailed from Port Charlotte, Fla., and is survived by his parents.