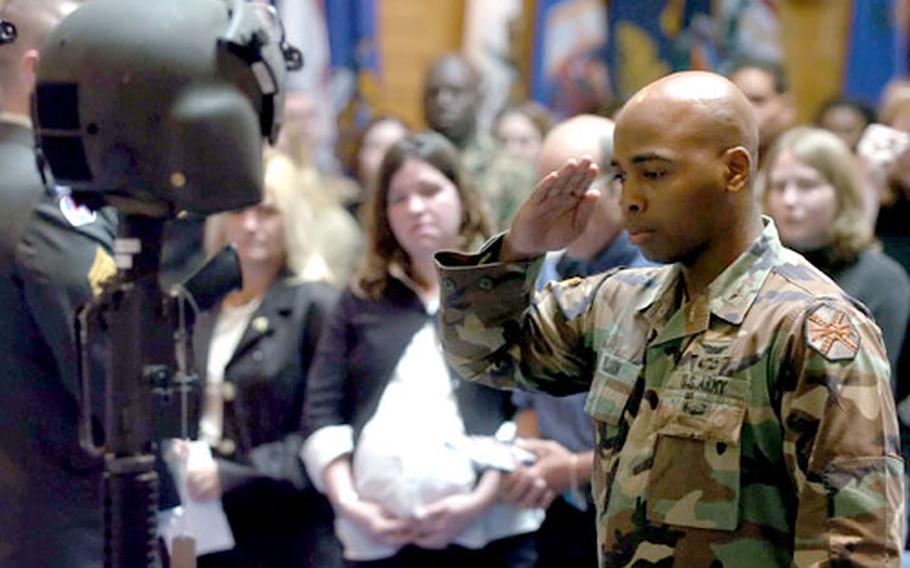 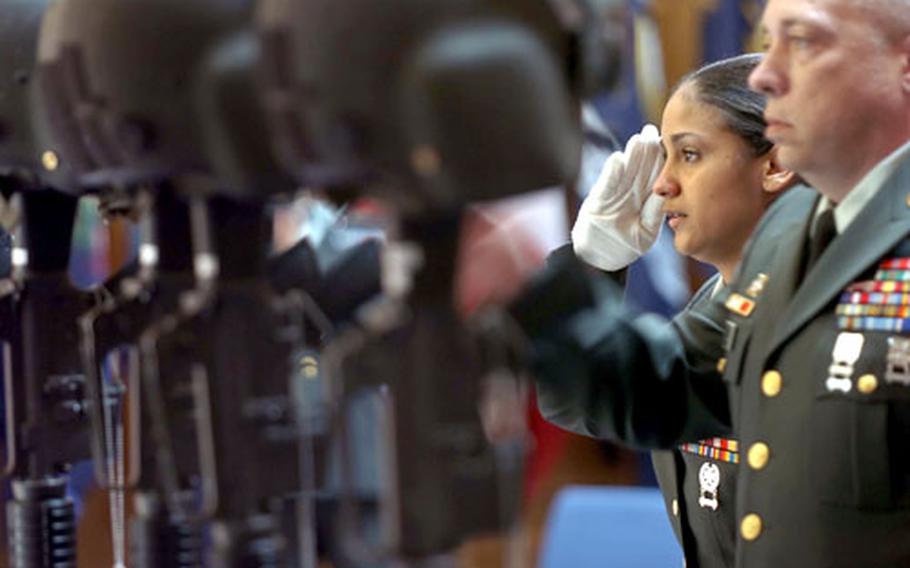 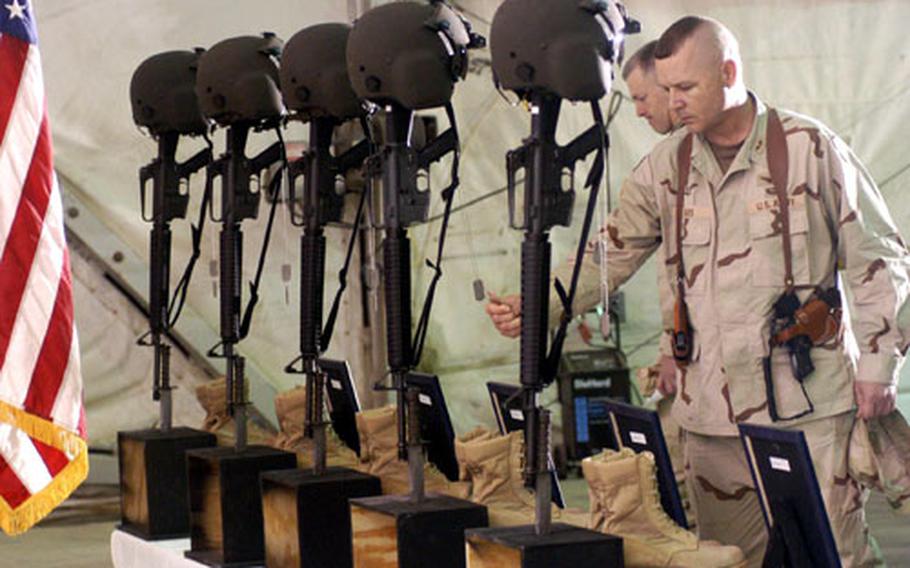 Only these icons of grief, and a raft of memories, remained Thursday for the Giebelstadt military community to remember the five CH-47 crewmen from Company F of the 159th Aviation Regiment (known as &#8220;Big Windy&#8221;), lost April 6, along with 13 passengers, when their Chinook crashed in Afghanistan.

Capt. Adam Kauffmann remembered Prather, 32, as a man who loved a joke more than anything except his family and flying. A former enlisted medic, he had come to Giebelstadt in December 2001 after training as a Chinook pilot. He had racked up 100 combat hours during his first month in Afghanistan on top of 240 earned during Big Windy&#8217;s 2003-04 tour in Iraq.

Friends recalled Ayala, 24, as a devoted pilot and a gifted musician who composed his own songs after teaching himself to play the guitar. He had served as an OH-58 helicopter mechanic before becoming a Chinook pilot in 2003.

Sanders, 29, was aboard the fatal trip as its flight engineer, the man who made sure the Chinook was always ready to fly. He&#8217;d joined the unit just six months earlier and already had earned a reputation as a tip-top mechanic. He loved to fish and had served two tours in Alaska because he loved the outdoors.

Spivey, 21, the flight&#8217;s crew chief, grew up with the military life. He was the son of an active-duty Army master sergeant who called Fort Bragg, N.C., home. His appearance &#8212; thin and serious-looking, with glasses &#8212; disguised a jokester who lived for the nightlife.

Sykes, the 25-year-old door gunner, was a bodybuilder who liked working on his car as much as fixing a gourmet meal. He kept his room impeccably neat and was quick to help friends in a pinch.

As the ceremony concluded, the mourners lined up to salute the shrines and touch the lost soldiers&#8217; dogtags.

Profiles of the fallen ...

&#182; Chief Warrant Officer 2 David Ayala, 24, was born in South Carolina and enlisted in the Army after graduating from high school. He married his wife, Athena, while attending flight school at Fort Rucker, Ala., in 2002. Ayala served in Kosovo and Afghanistan, logging 50 hours of combat time in one month. Awards include the Army Commendation Medal, Army Achievement Medal and the Bronze Star, which was awarded posthumously.

Maj. Craig Wilhelm, Ayala&#8217;s company commander, praised his &#8220;ability to make sure we always kept things in the proper perspective.&#8221; Chief Warrant Officer 2 Ed Maynard attended flight school with Ayala and recalled his friend&#8217;s love of wine and cooking and desire to find &#8220;just the right house&#8221; for his wife to live in.

&#182; Chief Warrant Officer 2 Clint J. Prather, 32, was a native of Cheney, Wash., and enlisted to serve as a combat medic in the Persian Gulf War. He served in South Korea and later in Fort Gordon, Ga., where he met and married his wife, Irene. He flew 240 hours of combat missions in Iraq, flying mainly out of Balad. In Afghanistan, Prather logged nearly 100 hours of combat flight time in one month. Awards include the Meritorious Service Medal, two Air Medals, the Army Commendation Medal and a posthumous Bronze Star.

Prather was &#8220;a charismatic joker&#8221; who &#8220;had a way of commanding a room,&#8221; Wilhelm said. Chief Warrant Officer 3 John Sims said Prather could have transferred out of the unit after serving a stint in Iraq, but volunteered to stay on, knowing it was headed for Afghanistan.

&#182; Staff Sgt. Charles R. Sanders Jr., 29, a native of Charleston, Mo., enlisted in 1995 as a helicopter mechanic. He logged more than 60 hours of combat flight time in one month in Afghanistan as a flight engineer. Sanders married his wife, Gwendolyn, in 1998 and the couple had two children. Sanders&#8217; awards include the Army Commendation Medal, the Senior Aviation Badge and a posthumous Bronze Star.

Sgt. Jesse Wandling said Sanders, a relative newcomer to &#8220;Big Windy&#8221; in Germany, was the son of a retired Army first sergeant who had two stints of service in Alaska, with a stop in Georgia sandwiched between.

&#182; Spc. Michael K. Spivey, 21, was born in Oklahoma and enlisted shortly after graduating from high school. Working his way up to crew chief, Spivey served in Iraq and volunteered to be a door gunner. He flew more than 65 hours of combat time in Afghanistan. Awards include the Meritorious Unit Citation, Global War on Terrorism Expeditionary Medal and a posthumous Bronze Star.

Wilhelm recalled Spivey as &#8220;a faithful volunteer who never seemed to tire.&#8221; Pfc. Amber Gardner said her friend &#8220;always knew the right thing to say at the right time.&#8221; She praised his intelligence, responsibility and high moral standards. His stint in Iraq &#8220;made him stronger as a person and a soldier.&#8221;

&#182; Spc. Pendelton L. Sykes II, 25, was a native of Chesapeake, Va., and enlisted in the Army in 2003. Sykes, who was married, volunteered to serve as a door gunner for the Afghanistan deployment, logging dozens of combat flight hours in the unit&#8217;s first month in the country. Awards include the Global War on Terrorism Service Medal and a posthumous Bronze Star.

Wilhelm called Sykes &#8220;the young man with a contagious smile.&#8221; Spc. Alex Rolinski said his friend liked to lift weights and repair cars and helicopters. &#8220;But he was best at being a friend. He had an unforgettable laugh.&#8221;