Friends at Giebelstadt gather to honor sergeant killed in Afghanistan 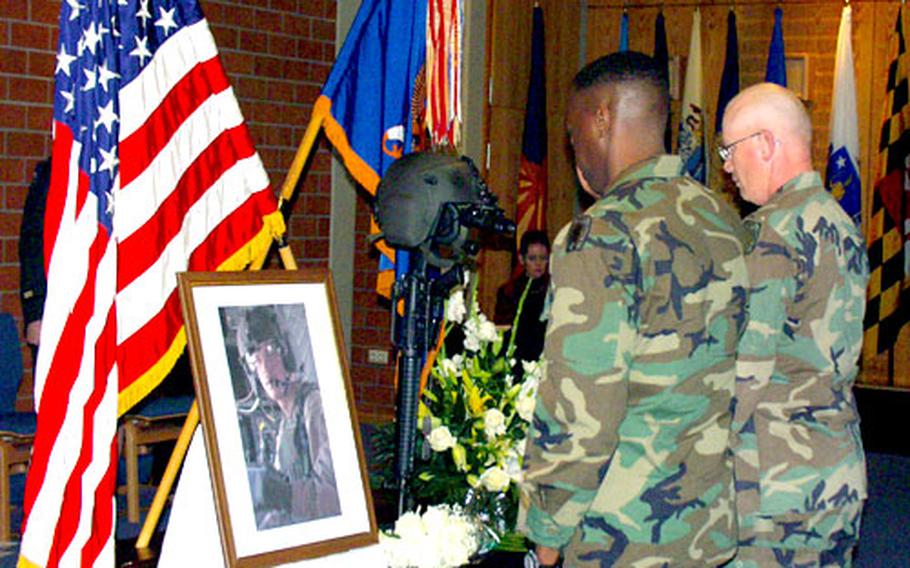 GIEBELSTADT, Germany &#8212; Sgt. Kenneth Ross couldn&#8217;t believe his good fortune, the day in Afghanistan the helicopter mechanic found out he could fly.

He&#8217;d spent the first year of the Iraq war with the Giebelstadt-based 7th Battalion, 159th Aviation Regiment in Iraq overhauling CH-47 Chinooks, but ever since he was a youngster growing up in Tucson, Ariz., he&#8217;d wanted to fly helicopters.

Weeks after Ross arrived in Afghanistan, last March, he was offered a coveted crew chief slot that opened up with the 113th Aviation Regiment, a Nevada National Guard unit flying Chinooks out of Kandahar. Racking up combat hours couldn&#8217;t hurt in his real quest: to become a combat helicopter pilot.

Thursday afternoon, his friends gathered in the Giebelstadt chapel to remember him. Ross, 24, died Sunday along with four National Guardsmen when their Chinook crashed in mountains near Deh Chopan in eastern Afghanistan. He had pinned on his sergeant&#8217;s bars less than a month earlier.

The news devastated a unit that had spent a year in Iraq and six months in Afghanistan without losing a soldier.

It helped a little for his friends to remember Ross&#8217; quirky, infectious laugh and perpetual good cheer. He couldn&#8217;t stand to see anyone else down.

Ross enlisted in the Army weeks after graduating from high school in 1999, training as a Chinook mechanic and spending his first tour in Fort Campbell, Ky.

Ross arrived at the 7-159 Aviation in February 2003, just in time to deploy with the unit to Iraq. During the year between deployments, he fell in love with a young German student named Anne Lehman. They planned to be married during his rest-and-recuperation leave in December, Carey said.

As badly as he wanted to fly, Ross called his fiancee and asked her permission before he took the crew chief&#8217;s slot. She was terrified for his safety, Carey said, but she gave him permission, anyway.

Usually Ross called her every Sunday. Last weekend, instead, Lehman got an e-mail from his sister, Stephanie, with the news that carried her worst fears.

He said she comes from an impoverished family in the former East Germany. Friends are now trying to raise some money to take care of her short-term needs. Carey said anyone interested in helping can e-mail him at: Chinnookcrazy@aol.com.

Tears fell freely as a bugler rendered taps. But friends said they took comfort knowing how happy he was in his work.