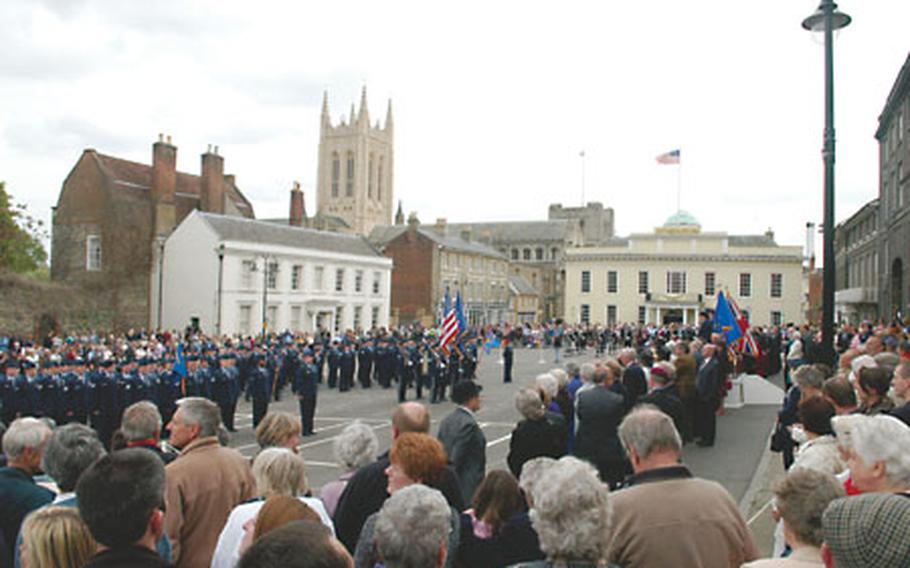 Units from area U.S. Air Force units march into the Bury St. Edmunds town center during the America 400 festival in May. The celebration honored Bury’s connection to the founding of Jamestown, Va., in 1607. Local residents say relations between the U.S. and England won’t be affected by last week’s friendly-fire incident in which an F-15 from RAF Lakenheath dropped a bomb in Afghanistan that killed three British troops. (Geoff Ziezulewicz / S&S)

BURY ST. EDMUNDS, England &#8212; Air Force Tech. Sgt. Randy Simon first came to this small English town 10 years ago, and he has no intention of leaving.

A 20-minute drive from RAFs Mildenhall, Lakenheath and Feltwell, the idyllic community couldn&#8217;t have been more welcoming, said Simon, who is stationed at Lakenheath with the 48th Fighter Wing.

After retiring in a few years, Simon said he plans to stay here with his British wife.

But this town and surrounding area of approximately 35,000 has found itself at a tragic crux involving two of its military pillars. On Aug. 23, three soldiers from the British army&#8217;s Royal Anglian Regiment, based in Bury St. Edmunds, were killed when a U.S. F-15 fighter accidentally dropped a bomb on their position in Afghanistan.

That fighter jet was based at Lakenheath, a short drive from the British regiment&#8217;s headquarters.

Despite the awful coincidence, people in town said this week they don&#8217;t think the deaths of British army Pvts. John Thrumble, Robert Graham Foster and Aaron James McClure will affect relations between the two communities.

Representatives with the Air Force housing office for the area would not disclose the number of Americans living in Bury, citing operational security. Town officials said they didn&#8217;t keep formal track of such numbers either.

John Griffiths, leader of the St. Edmundsbury Borough Council, said he hoped the friendly-fire incident last week doesn&#8217;t affect how everyone gets along.

But while British residents said they didn&#8217;t expect any change in American and British interactions in town, that doesn&#8217;t mean they support all U.S. policies or practices.

Because of views of the U.S. as a gun culture, and the fact that the U.S. did not give up evidence in the 2003 friendly-fire death of a British soldier in Iraq by American forces, there can be a view that the Yanks aren&#8217;t the safest bet in tense situations, Thexton said.

&#8220;There is a preconception that Americans can be a bit trigger happy,&#8221; he said half-jokingly.

Cockpit footage in the 2003 friendly-fire case was not released by the U.S. despite demands from British investigators. It eventually was leaked to the British media. A separate U.S. investigation exonerated the involved American personnel.

Even if America has nothing to hide, not cooperating in such investigations only deepens suspicions, Thexton said.

This week, U.K. investigators expressed outrage over news that the U.S. as a rule will not supply military witnesses for friendly-fire investigations.

Outside The Nutshell, billed as the smallest pub in the U.K., Nick Clark said he loved America and was looking forward to a trip there in a few weeks, when he will drive coast-to-coast with friends.

Many airmen come into the pub, he said, proudly brandishing a Dallas Cowboys jersey an American customer had given him.

Standing next to Clark, Dave Seager said he has no problem with Americans.