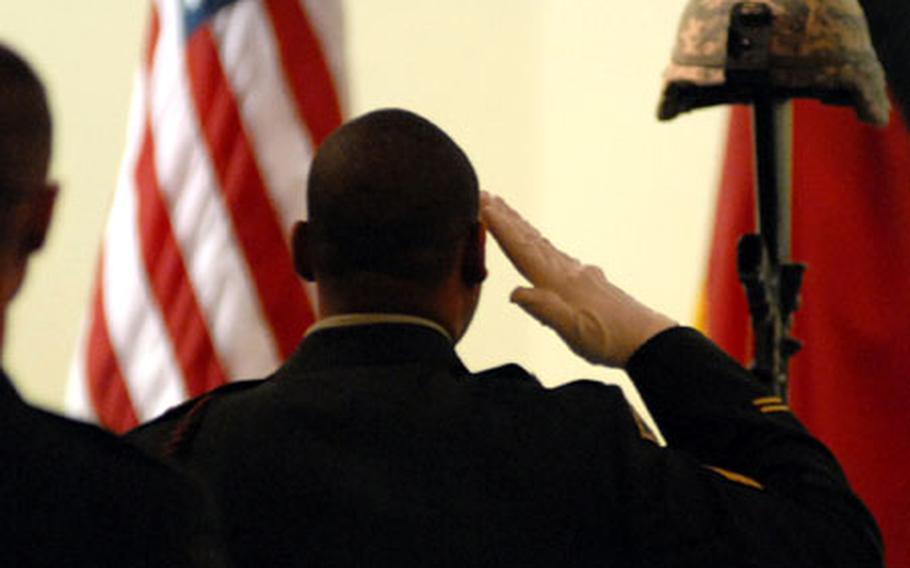 A final salute is made for Spc. Andrew P. Daul following the memorial ceremony for the 1st Battalion, 37th Armor Regimet soldier, who was killed in Iraq on Dec. 19, 2006. (Michael Abrams / S&S)

Faust had just finished talking with a colleague, and wasn&#8217;t watching where he was going when he turned to walk away. He ran smack into something solid, shook off the pain and looked up to see the 6-foot, 1-inch Daul looking down at him apologetically.

Daul&#8217;s size, strength and good deeds were not enough, though, to protect him on Iraq&#8217;s treacherous battlegrounds, where even giants fall.

The U.S. Army community in Friedberg was reminded of this Monday as its citizens gathered to remember Daul, a 21-year-old giant of a man, who was killed in Hit, Iraq, on Dec. 19. He was the seventh soldier from 1st Battalion, 37th Armor Regiment, to die in Iraq. The battalion is part of the 1st Brigade Combat Team, 1st Armored Division.

The Army had been a good fit for Daul, Maj. Jason Irwin, the battalion&#8217;s rear detachment commander, said during the ceremony. But in the 42 months Daul spent in the Army, 29 were spent in Iraq, and he was looking forward to returning to his hometown of Brighton, Mich.

An avid bodybuilder, Daul, who could bench 475 pounds, had plans to pursue a career in fitness and open his own weightlifting studio when he got out of the Army. Spc. Nathan Hannan, who served in the same platoon with Daul, said the barrel-chested soldier was always trying to persuade others to pick up weightlifting. Many did.

It was partly this attribute &#8212; that others followed where Daul led &#8212; that made his leaders and peers take notice of him.

Earlier in the deployment, he had witnessed an explosion set fire to a vehicle carrying two civilians, Irwin said. Daul leapt from his Abrams tank and dashed to their aid. He pulled both from the burning wreck and was able to revive one of them.

&#8220;You see, Andrew possessed an all-too-rare ability to act decisively amidst the greatest danger, ignoring all personal safety,&#8221; Chaplain (Col.) Bruce M. Fredrickson said at the ceremony. &#8220;In the valley of the shadow of death, Specialist Daul feared no evil.&#8221;