Friday night fights, under the lights in Tal Afar 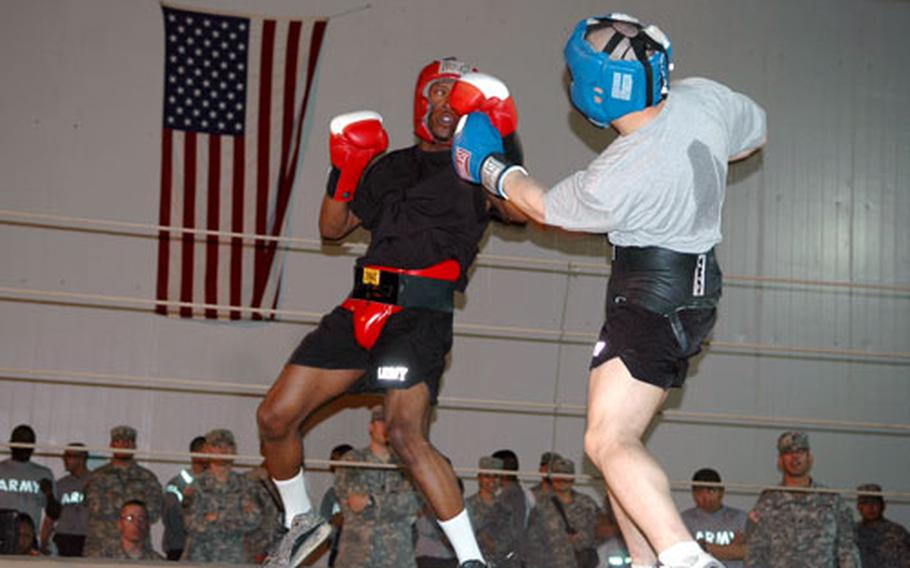 At least that was the view of many of the soldiers who participated in a bruising, month-long series of boxing matches held by the 1st Brigade of the 1st Armored Division.

The fights, or &#8220;Friday Night Smokers&#8221; as they were called, culminated in four championship bouts Friday, an event that drew more than 500 spectators who cheered and jeered the pugilists.

The fights, held in a specially constructed boxing ring under spotlights, were a welcome respite from the daily routine and dangers of the unit&#8217;s 3&#189; months in Iraq, soldiers said.

MacFarland, who commands the Friedberg, Germany-based unit, smiled broadly and puffed a cigar throughout the bouts as his special guest, Tal Afar Mayor Najim Abdullah Abid Al-Jibouri, kept a close eye on the action.

The Friday night bouts were a surprising success, according to participants and spectators. While soldiers at Forward Operating Base Sykes fought Friday on a raised and roped boxing ring, soldiers in smaller camps boxed on tent tarps in preliminary bouts leading up to the main event. One such match took place two weeks ago at Camp Nimur, near the Syrian border in northwest Iraq.

Whatever the Nimur matches lacked in finesse, they more than made up for in sheer, fist-slamming enthusiasm. In at least two matches, boxers&#8217; arms flailed like windmills, serving up helpings of bloody noses and knockdowns.

One of Friday&#8217;s fighters, Cpl. Daniel Uribe, 21, of Rancho Cucamonga, Calif., said he was boxing to help pass the time in Iraq.

Maj. William Ashmore, the brigade&#8217;s personnel officer, oversaw planning for the matches. In all, 44 soldiers, including three females, duked it out during the fight series.

The event kicked off with an electric, Jimi Hendrix-style version of the &#8220;Star-Spangled Banner&#8221; played on guitar by Spc. Chester W. Arnett &#8212; one of the performances that brought heavy applause that evening.

Each match was refereed by Sgt. 1st Class Alexander, Roa, 31, of Brooklyn, N.Y. A former boxer in civilian life, Roa said he took a few hits to the head from wild punches thrown during the matches. But he said the blows were well worth it.

The hardest-working boxer Friday was Sgt. Domenico Carbone, 22, of Smithtown, N.Y. Carbone fought in two matches, winning his first but losing the second.

Then, when all the fights had ended and the crowd drifted back to their containerized housing units, Carbone helped disassemble the boxing arena.