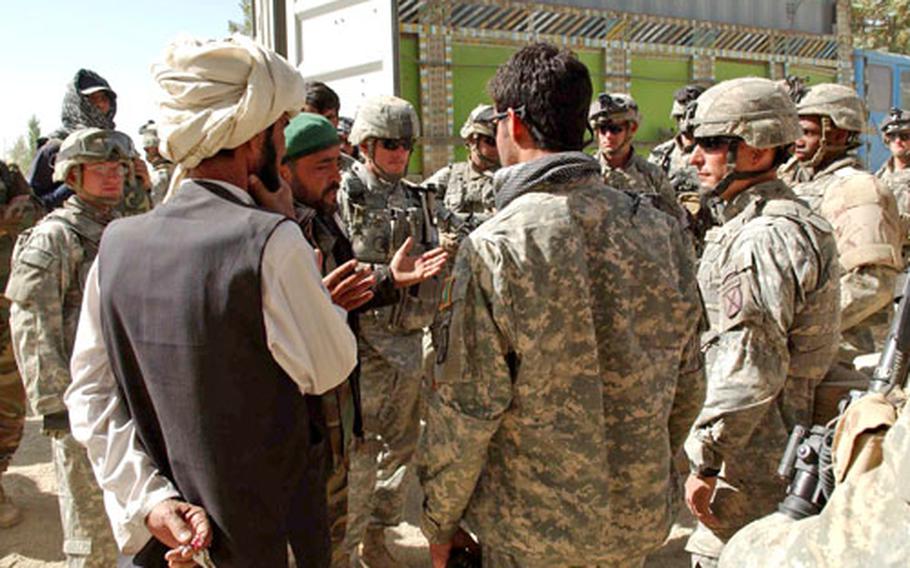 MIRI, Afghanistan &#8212; The dispute had been simmering for hours in this woebegone provincial town, with yelling, shoving, fistfights and warning shots from AK-47s.

U.S. soldiers, brought here to find Taliban fighters, prop up the provincial government and bring security, looked on with unease from just a few feet away.

A few minutes later, the yelling increased, followed by the unmistakable sound of numerous rifles being locked and loaded.

The hostilities were between some 130 Afghan National Army soldiers and anywhere from 30 to 70 Afghan National Police, both of which are supposed to keep the peace in Afghanistan&#8217;s Andar province, according to the U.S. plans to pacify, stabilize and reconstruct the country.

In this particular instance, it all began before 9 a.m. when a shopkeeper accused a police officer of stealing from him. The officer was confronted and beaten by locals. &#8220;His buddies got mad,&#8221; according to Noorullah Noor, a translator for the U.S. forces.

Then one Afghan soldier fired warning shots &#8212; as a signal to summon other soldiers, according to Lt. Col. Chris Toner, the 2nd Battalion&#8217;s commander. At the same time, another soldier with a grenade launcher got on the roof of a decrepit fortress next to a building being used as a garrison area.

Toner, Noor and other translators and soldiers ran over to calm the two groups and Toner spoke with their commanders.

Toner brought a task force of more than 1,000 U.S. troops with him from the neighboring province of Paktika three days ago in an effort to stabilize the province, which has seen little U.S. presence over the past several years and is reputed to be an area rife with Taliban fighters. He set up in Miri, population 10,000, where a district center built by the United States Agency for International Development in 2005 had been abandoned some weeks ago.

The task force plans to return to Paktika in a little more than a week, after getting public works started, flying in the provincial governor and handing out radios. Some 100 U.S. soldiers are to stay in Miri &#8212; &#8220;For as long as it takes,&#8221; Toner said.

But the main security effort is supposed to be provided by Afghan soldiers and police. The police have a reputation for demanding money and stealing, while, according to U.S. soldiers, the army is more reputable. &#8220;They&#8217;re not that bad,&#8221; said Vega.

The Friday dispute underscored the difficulties in executing the U.S. plan.

A lull of sorts ensued for a while but then tensions escalated again, with the Afghans locking and loading, ready to fire on one another. They were stopped and separated again by Noor and other Afghan translators, some of them U.S. soldiers, and Afghan commanders, Toner said.

Toner told the Afghan army commander to order his troops out of the village. They got into their tan pickups and headed out to set up security on the town outskirts in preparation for a shura, or meeting, Sunday, for which the district governor and other dignitaries were to be flown in.

As the trucks left town, many breathed a sigh of relief.