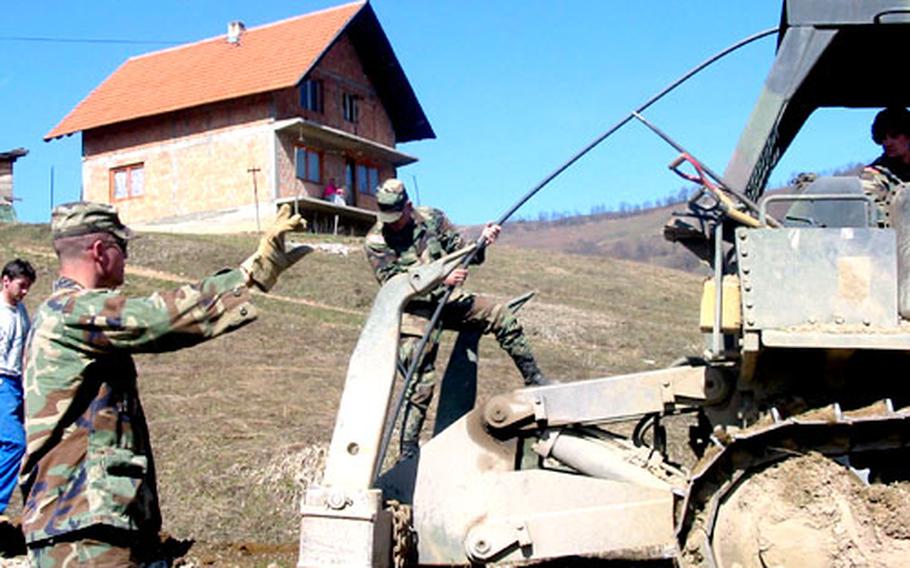 Soldiers from the 682nd Engineer Battalion of the Minnesota National Guard put a water pipeline in the ground for residents in the village of Besici, Bosnia and Herzegovina. (Paul Lakin / Courtesy of U.S. Army)

Water should soon start coming out of the faucet in Sifa Mehanic&#8217;s kitchen for the first time in many months, an enormous relief for this elderly woman.

Since Mehanic and her husband, Ismet, returned in 2000 to their prewar home in Besici, Bosnia and Herzegovina, water would only trickle out of the tap, and then it completely stopped.

The villagers would walk a mile to a spring to fetch drinking water and would use the water from a nearby river to wash up and do laundry, she explained.

With help from U.S. peacekeepers, the problem of collecting water and the worry over whether it is sanitary will end soon.

The people from the village of 35 households collected about $1,500 to buy materials for a pipeline, but it wasn&#8217;t enough. Even if they had all the money, they still needed help to dig a 3-kilometer canal for the pipes that would transport the water from a mountain spring to villagers&#8217; homes.

So the villagers turned to the soldiers of Company C, 2nd Battalion, 136th Infantry Regiment who patrolled the area.

The troops enlisted help from the 682nd Engineer Battalion &#8212; members of the Minnesota National Guard &#8212; who had the needed heavy machinery.

But the engineers said that all the materials must be supplied and the villagers must help with the project. Staff Sgt. Paul Lakin, commander of the 2nd Platoon of Company C, had to do some coordinating and help find the missing money.

He went to the U.N. Development Programme representative in Srebrenica and persuaded the organization to provide the missing funds.

And in late March the soldiers were ready with their equipment, which dug the canal, laid the pipe and covered the canal with dirt simultaneously, cutting the number of work days. In just one day, the pipeline was finished. Villagers are now in the process of hooking up their homes to the pipeline.

Lakin said the water system that existed in the village before the war was falling apart. The diameter of the pipe bringing water from the mountain to the village was small to begin with, and sedimentation that collected in the pipe for years clogged it almost completely. The water basin was crumbling, too.

And Ismet Mehanic, who realizes how critical the soldiers&#8217; help was, could not express his gratitude for the water that will be pouring into the faucets of the homes in Besici.

But Lakin and his troops understood it.