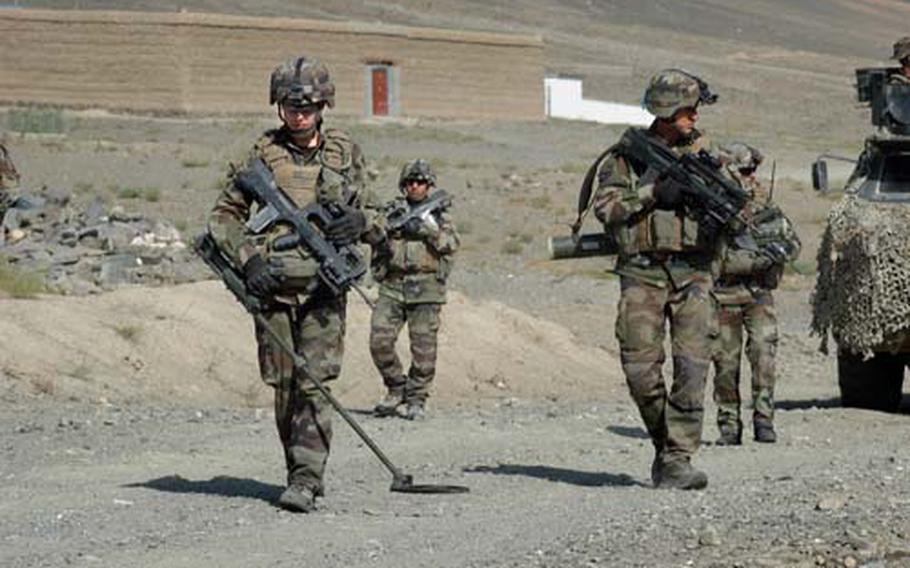 Sorting out friend from foe is one of the toughest challenges facing NATO forces in Afghanistan. (Kevin Dougherty / S&S)

TAGAB VALLEY, Afghanistan &#8211; After several years of enduring Americans&#8217; scorn for sitting out the Iraq campaign, the French military is going toe-to-toe with the Taliban, shedding blood and proving a worthy partner in Afghanistan, U.S. officers say.

While some knock the French for not empowering junior officers more or being aggressive enough in some instances, U.S. servicemembers serving with them northeast of Kabul generally spoke well of their ally.

Disi and 30 other Americans recently joined a company of French marines on a three-day operation that started in Tagab Valley. It&#8217;s a place the Soviets couldn&#8217;t pacify in the 1980s, and the British didn&#8217;t fare well a century before. Nonetheless, NATO is counting on France to stabilize this strategic valley, which links Kabul to northern Afghanistan.

On the first morning of the operation, up to 40 insurgents initiated the first of 10 separate engagements along a 10-mile stretch. It was the day after a French marine from another company was struck by lightning. The violent overnight storm hit while he and members of a strike force were up in the mountains heading out on a raid. Two other marines drowned.

Going into the southern Tagab Valley the following day &#8220;was pretty ballsy,&#8221; said Disi, who leads a team that mentors the Afghan police. &#8220;We knew we were going to get lit up. I was proud and surprised they went ahead with this operation after they lost those three guys.&#8221;

The French focus simultaneously on security and development, believing they go hand-in-hand. From their base in Tagab village, the French troops set out to gauge insurgent strength along the valley road and give reconstruction teams time to assess the area for construction projects, such as roads and police stations.

&#8220;You don&#8217;t have to wait for total security to start projects,&#8221; said Capt. Antoine. (Except for senior officers, the French military permits only the use of first names.)

Early into the firefight, Antoine, the mission commander, bounced around the corner of a mud-brick building and ran 40 yards into a dusty pomegranate grove, where insurgents were firing. Several of his men were on his heels. At various points, other French troops broke for the orchard and drew fire.

In the thick of it was a lieutenant named Guilhem.

The battle and the French approach to it was the topic of conversation among some Americans enjoying their first cup of coffee the following morning. In sum, they described the French as deliberate, thorough, heavily armed and capable.

One servicemember said he liked going out with the French precisely because &#8220;they roll out heavy.&#8221; The three-day mission included nearly 200 people and about 40 armored vehicles.

Another soldier suggested that the French may have been too cautious. He thought they could have pressed the Taliban even further, although at least three insurgents were killed. The NATO force suffered no casualties.

&#8220;They will stick to their plan regardless of the situation out there,&#8221; said Army Special Forces Staff Sgt. Andrew Piekalkiewicz.

He suspects a U.S. force in the same situation would have been more aggressive. The French are competent, Piekalkiewicz said, but they can be too conventional at times, willing to sacrifice mobility for excessive might.

Since it assumed responsibility for Kapisa province in July 2008, French combat deaths have spiked from 14 to 36. The greatest loss occurred Aug. 18, 2008, when 10 troops were killed in an ambush in southern Tagab Valley near Surobi.

France dispatched its first soldier to Afghanistan in December 2001, and currently has roughly 2,800 in country.

Over the years, French forces have participated in several counterinsurgency and peacekeeping missions, particularly in Africa, said Etienne de Durand, director of the Security Studies Center at the French Institute of International Relations in Paris. While the French have a ton of experience in that area, they don&#8217;t have much combat experience, Durand said. Basically, the reverse is true of the United States, he maintains.

&#8220;The U.S. Army culture has evolved a lot because of Iraq and Afghanistan,&#8221; Durand said. &#8220;Americans are less trigger happy, while the French are more concerned now with firepower and [force] protection.&#8221;