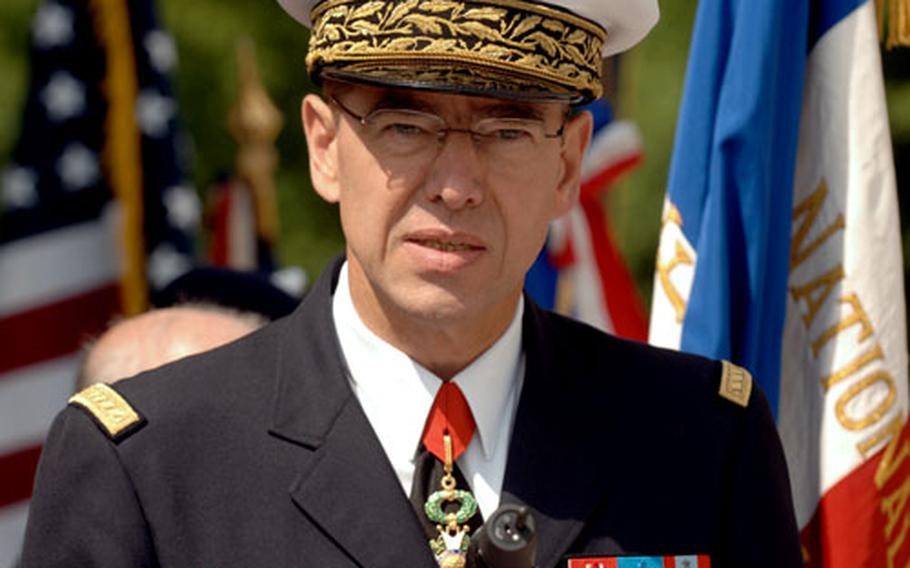 French Air Force Chief of Staff Gen. Stephane Abrial speaks at a ceremony honoring U.S. aviators near Paris on May 24. On Wednesday, Abrial will take over Allied Command Transformation in Norfolk, Va., a sign of increasing French participation within NATO, which it rejoined this year after a 43-year hiatus. (Scott Wagers / U.S. Air Force)

France&#8217;s reintegration into NATO&#8217;s military command is being hailed as a plus for U.S. efforts to get its allies to spend more money on defense and as a way to increase French and American military cooperation.

The reintegration also means that the French will be taking charge of the alliance&#8217;s only North American command and its only command outside of Europe, Allied Command Transformation in Norfolk, Va.

That command has always been led by an American general, an alliance spokesman said.

France left the military command in 1966 and rejoined it earlier this year.

Gen. Stephane Abrial, the French air force&#8217;s chief of staff, will take over ACT from U.S. Marine Gen. James Mattis in a ceremony on the aircraft carrier USS Dwight D. Eisenhower on Wednesday.

"Having France more present in the integrated military command and [France] having two commands, especially the Norfolk one, allows the U.S. to have a partner in pushing for modernization (of members&#8217; militaries)," said Justin Vaisse, a senior fellow with the Brookings Institution in Washington, D.C.

"You got a French general in a position that has always been a U.S. general and in the United States, which is remarkable," alliance spokesman James Appathurai said about ACT.

"People were a little suspicious that France was more interested in strengthening the [European Union] than NATO, and I think that has been put to rest."

Appathurai called Allied Command Transformation one of the alliance&#8217;s top two commands. Its work includes training and developing technologies and practices to combat the roadside bomb problem in Afghanistan. Appathurai said even though the French are taking command of ACT, he does not believe that will diminish the United States&#8217; role in NATO.

"National power inside NATO is not proportional to the number of commands. &#8230; Of course, it is important as a symbol," Vaisse said.

Vaisse said having France more involved in the alliance, especially with ACT, could help with the push to get countries such as Italy, Spain, the Czech Republic and its eastern European members to spend more money on defense and streamline their militaries.

"We have partnered with the French military on many missions and training exercises over time," said EUCOM spokesman Lt. Cmdr. Taylor Clark in an e-mailed statement. "Afghanistan is one example of this. The reintegration should increase our opportunities for future training together."