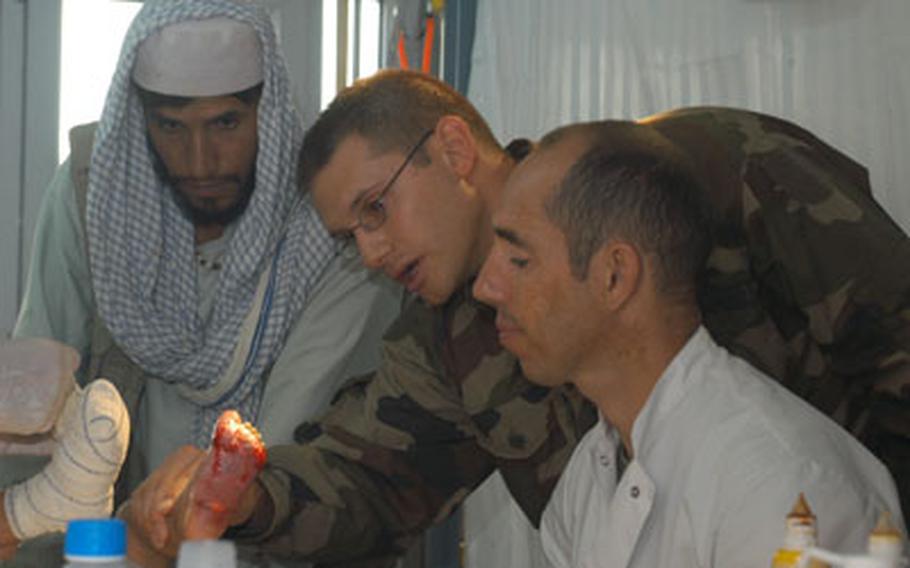 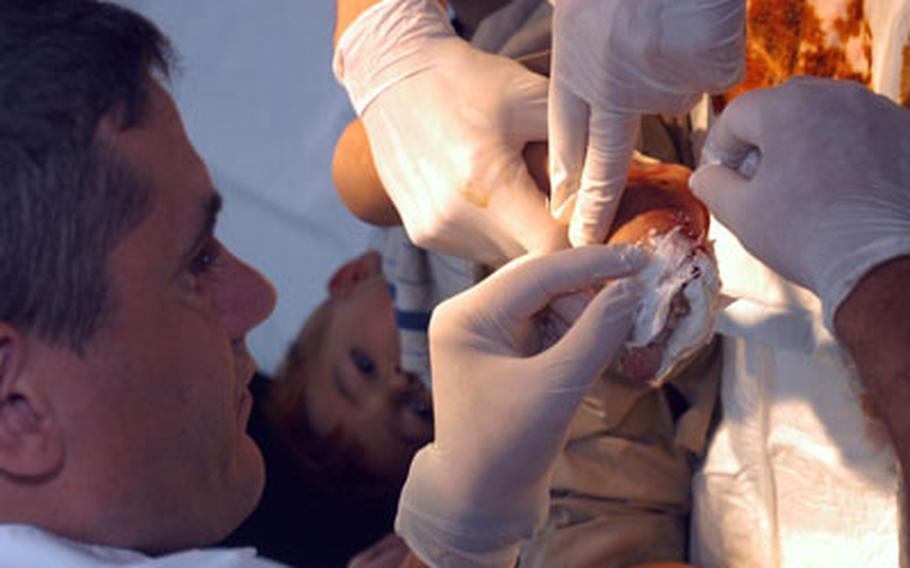 At the French forward operating base in Nijrab, Afghanistan, Shahram, a 3-year-old Afghan boy, finds comfort on his father’s lap. The father would not give his name for fear of reprisal for turning to the French medical clinic for his son’s aid. Workers at the clinic say their presence improves the perception of coalition forces. ()

NIJRAB, Afghanistan &#8212; The Afghan boy wails and fusses until a French nurse administers a painkiller and sticks a red American lollipop into his tiny, trembling hand. Then there is peace.

It&#8217;s a relatively slow day at the French military clinic in Nijrab, but the portico outside the three-table treatment room is still populated with a few locals waiting to get inside for their shots.

The open-door policy "gives a positive perception of the coalition force," said French marine Maj. Julien, the doctor on duty. (Except for senior personnel, the French military permits the release of only a servicemember&#8217;s rank and first name.) "The locals know the French will help them, even if they are bad guys."

A few days earlier, Julien was subbing for another doctor about 10 miles south of here at a second French base in the Tagab Valley northeast of Kabul. That doctor was on a three-day, French-led mission that came under heavy fire several times, though no one in the coalition was injured.

Shortly after sunset, an Afghan man appeared at the French base in Tagab with four bullet wounds and extensive internal injuries. He had been shot in the midsection, suffering wounds to his kidney, pelvis and buttocks.

"As they often do, fighters become patients with a fabricated tale," Julien said. "This guy was probably not a very good guy."

Through an interpreter the man innocently stated he had gotten into a dispute with a friend. Julien said patients have been known to remove their beards &#8212; a Taliban trademark &#8212; in an attempt distance themselves from the insurgency.

A U.S. helicopter eventually transported the gunshot victim to the 40-bed U.S. hospital at Bagram Airfield, where he underwent emergency surgery. Authorities had planned to question the man later, Julien said.

On average, the French medical clinic at Nijrab handles about 70 to 80 cases a week. In the past few weeks, however, the number of locals seeking medical care has dropped by roughly 40 percent, according to Julien. He suspects insurgent threats are the reason for the decrease, based on what his interpreters are telling him.

One of the people Julien has come to rely on is Sgt. Nathaniel Lane, a medic with the Georgia Army National Guard. He&#8217;s at the French base in Nijrab as part of a U.S.-sponsored Embed Training Team tasked with mentoring a unit of the Afghan National Army.

"Their methods are very similar to our methods when it comes to treating patients," said Lane, who helps out at the clinic a couple of times a week. "The French are a big part of our mission here."

That mission is to stymie the spread of insurgent activity by improving security while concurrently pushing through several development projects.

On this day, there is only one patient at the clinic as a direct result of the insurgency. He&#8217;s a man in his 40s who got struck below the left kneecap by an errant bullet. Julien asked him to return for a post-op visit.

To the man&#8217;s right is Shahram, the 3-year-old boy who is now well into his lollipop.

Both of Shahram&#8217;s feet were badly burned in a cooking accident at home a couple of weeks ago. Afghan women typically cook meals on the ground, and little Shahram had knocked over a pot of boiling water while playing. His father sits patiently at his side, stroking his face while Julien and two nurses re-dress his wounds.

Shahram&#8217;s case was not unusual. Julien said a majority of the patients the doctors see are for regular ailments, cuts and burns. As proof, the following day another child about Shahram&#8217;s age was brought in because of a similar accident.

"It&#8217;s crazy how many people we receive with burns," Julien said.