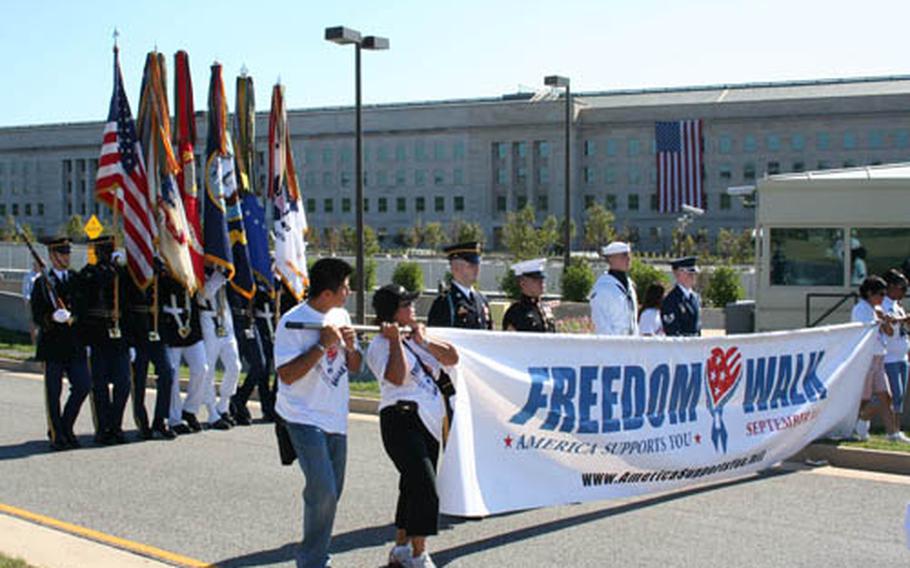 The U.S. Joint Service Color guard along with participants at the America Supports You Freedom Wall parade towards the Pentagon on Sunday. (Rick Vasquez / S&S)

The U.S. Joint Service Color guard along with participants at the America Supports You Freedom Wall parade towards the Pentagon on Sunday. (Rick Vasquez / S&S) 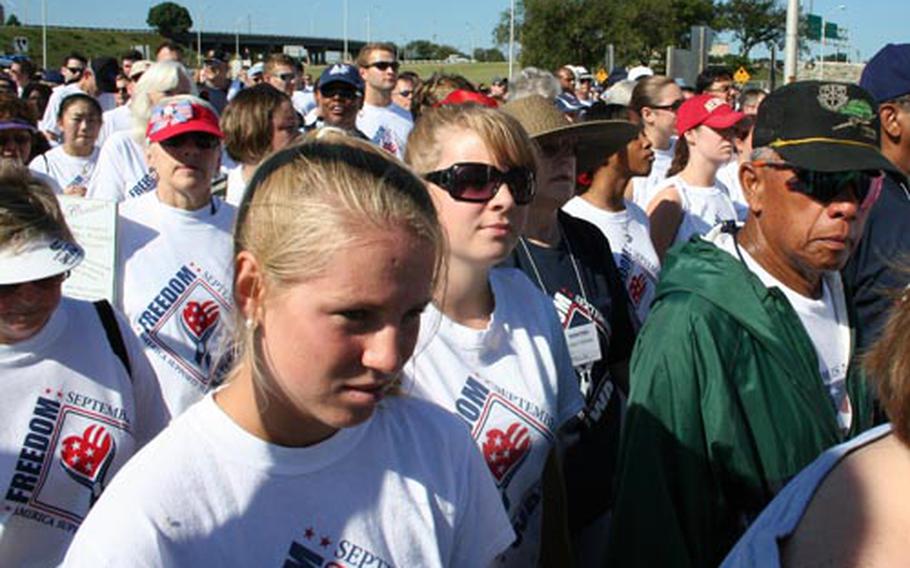 Participants at the America Supports You Freedom Walk on Sunday get closer to the finish line at the Pentagon. The tradition began with a walk in Washington D.C. and it is now in its fourth year with communities across the nation participating. (Rick Vasquez / S&S)

Tyler, 50, was in the Pentagon when American Airlines Flight 77 slammed into the building, she said.

She thought her life was over, but she woke up outside the Pentagon, where she had been carried.

On Sunday, Tyler was one of thousands of people who marched in the fourth annual America Supports You Freedom Walk, which is meant to commemorate the victims of the Sept. 11 terrorist attacks and show support for U.S. troops.

The event is the brainchild of Allison Barber, the Defense official who has purview over American Forces Information Service, the parent organization for Stars and Stripes.

More than 320 Freedom Walks were held Sunday, the largest of which was from Arlington National Cemetery to the Pentagon, according to a news release from Susan Davis International, the public relations firm that represents America Supports You.

About 10,000 people had registered to participate in Sunday&#8217;s walk to the Pentagon, but it appeared fewer than that took part in the walk.

Organizers and police could not give an estimate of the crowd on Sunday, but it took the slow-moving procession about 10 minutes to cross the finish line at the Pentagon.

Among the marchers was Sterling Hunter Sr., 45, of Fredericksburg, Va., who also was in the Pentagon on Sept. 11.

Christopher Unger, 63, also has a son in the Marine Corps.

Unger, of Washington, D.C., said Sunday&#8217;s walk allowed him and the other participants to "openly express our devotion to our sons and daughters."

For Tyler, the pain of Sept. 11 has not fully abated.

"I still have moments when I cry," she said.

Normally, she avoids crowds, but coming to Sunday&#8217;s Freedom Walk made her feel like she was not as alone as in the past, she said.