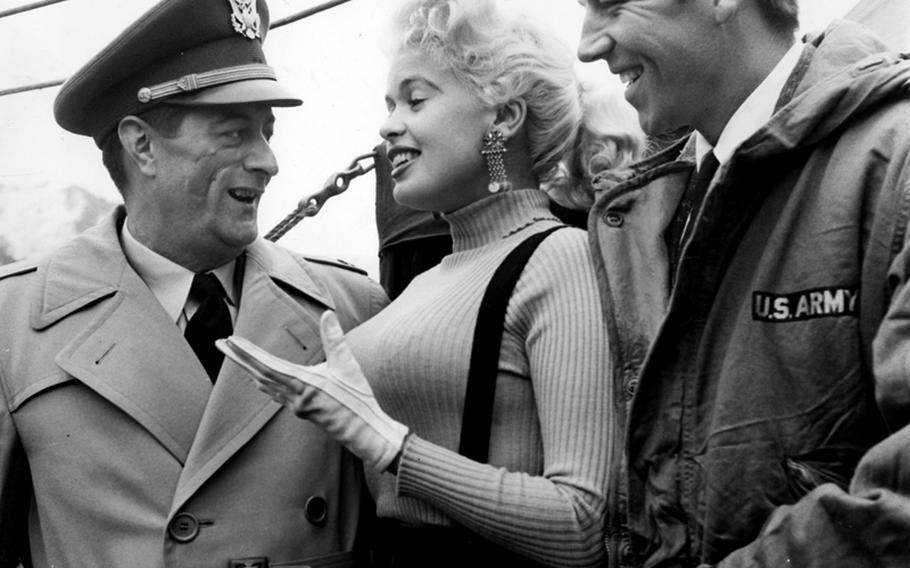 SEOUL, South Korea &mdash; When Bob Hope brought his troupe of entertainers to the Far East at Christmas time almost everyone in the cast was well known to the service personnel ... Jayne Mansfield, Jerry Colonna, Hedda Hopper, Les Brown, and the others. But audiences knew almost nothing about the tall, good looking guy that stuck closer to Jayne than the much-publicized tight fitting dresses she wears.

He was soon identified as Mickey Hargitay&mdash;-Miss Mansfield's fiance, the holder or a number of "Body Beautiful" titles and the distinction of being "Mr. Universe."

But there's more to Mickey than these things. He has a dramatic and impressive background as a man who has personally known Communist oppression&mdash;and risked his life to fight it.

Capt. Ernest R. Babin, chief of recreation, Eighth Army Special Services, can tell you all about it. It was he who helped the handsome Hungarian escape from his Communist controlled homeland some 10 years ago.

Capt. Babin, who met Hargitay with open arms at Kimpo AB here, tells the story of a young dancer who constantly risked his life to bring classified information to American intelligence officials in post-war Hungary and finally had to flee, leaving his family and friends behind.

Modest Mickey deemphasizes his cloak and dagger dealings, but has to admit he can never return to his native Budapest without fear of-Soviet retaliation.

Hargitay was 12 years old when the war broke out, but he never lost hold of his boyhood dream of coming to America throughout the bitter fighting.

After the war, he took advantage of early ballet training. He moved into show business as a ballet star and adagio dancer, much to the consternation of his parents, who had planned a military career for him in keeping with family tradition.

Hargitay met Capt. Babin, then stationed with the U.S. Allied Control Commission for Hungary, through the captain's wife, Marta, who was owner of a night club in Budapest. When Hargitay was booked at the club, an immediate friendship developed between him and the captain, who speaks fluent Hungarian.

Because of his friendship with the captain and other American soldiers he knew, Hargitay, who "always kept my eyes and ears open," .began to pick up bits of information at Communist cabarets where he entertained. He regularly reported what he saw and heard to American intelligence officials.

The secret police became suspicious. They picked up 18-year-old Hargitay and questioned him for hours. Unable to prove anything, they continued to hound him, threatening to draft him and send him to Siberia as they had done with his brother.

By this time Babin returned to the States and the young entertainer didn't know where to turn.

"Then one day I got an unexpected letter from Ernie (Capt. Babin)," he said, "He told me how I could get out of Hungary."

On Babin's advice, Hargitay circumvented Communist red tape by applying for a visa from the American Zone of Germany, instead of from Budapest. When the passport arrived, Hargitay left immediately, without even a word to his family, who was unaware .of his espionage activities.

His flight to freedom has all the smackings of a movie spy thriller. At a railroad station near the Hungarian border, he was stopped by secret police. "One of them pulled a gun," he recalls, "and fired at me from no more than four feet away. Somehow &mdash; I can't imagine how &mdash; he missed me and I managed to slip away in the crowd."

From then on it was clear sailing for a happy Hargitay, who was realizing his boyhood dream of going to America.

Settling in New York, after an extended visit with old friends Capt. and Mrs. Babin, Hargitay went back to his dancing, taking up contracting and interior decorating as hobbies because "I like to work with my hands."

He later set up permanent residence in Indianapolis, starting a successful contracting-interior decorating firm. Shrewd investments tell the rest of. the tale of his rapid climb up the financial ladder.

Around 1950, the already muscular Hargitay began to dabble with weights. Five years later he stepped into the national limelight as "Mr. Universe." Since then, his life has been public domain.

The future? Marriage to Miss Mansfield on Jan. 15. Then a husband-wife night club .stint in Las Vegas, where he will be dancing again. He is also planning to try his hand at movies and TV, though "I'm not going to make a heartbreaking thing out of it."

And, of course, his investments will still go on.

Not a bad set-up for a 29-year-old immigrant!