Freed but empty: Sunnis barred from returning to Iraqi town 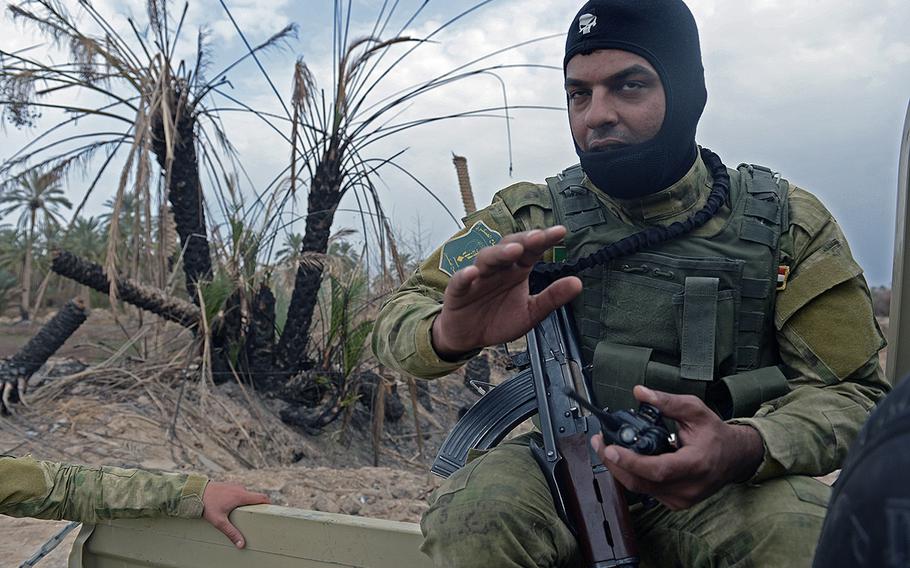 Buy Photo
A Badr Organization Shiite militiaman points out destroyed homes during a drive through Jurf al-Nasr, Iraq, March 8, 2015. Badr fighters joined other militias and the Iraqi army in an Iranian-backed assault that liberated the town in October, but Sunni residents have yet to be allowed back home. (Jad Sleiman/Stars and Stripes)

Buy Photo
A Badr Organization Shiite militiaman points out destroyed homes during a drive through Jurf al-Nasr, Iraq, March 8, 2015. Badr fighters joined other militias and the Iraqi army in an Iranian-backed assault that liberated the town in October, but Sunni residents have yet to be allowed back home. (Jad Sleiman/Stars and Stripes) Buy Photo
A Shiite militiaman from the Badr Organization walks to the end of a bridge destroyed by Iraqi forces near Jurf al-Nasr in an October 2014 operation, March 8, 2015. The bridge had previously been used to ferry supplies to Islamic State fighters in the town. (Jad Sleiman/Stars and Stripes) Buy Photo
A Badr Organization Shiite militiaman tidies up in the a Jurf al-Nasr mosque, which has been turned into a kitchen and barracks, March 8, 2015. Sunni residents who have yet to be allowed back home used to worship here before the Islamic State group took over. (Jad Sleiman/Stars and Stripes) 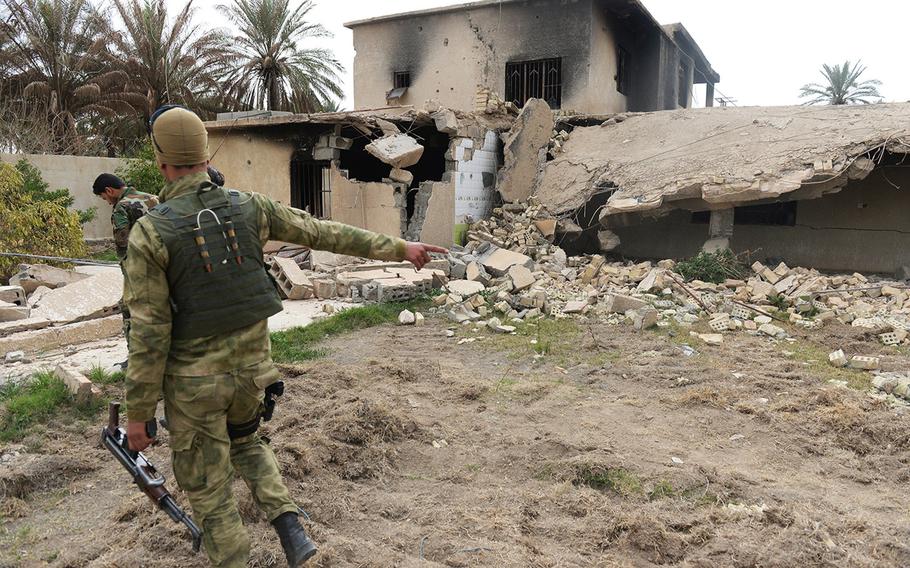 Buy Photo
The purported former residence of an Islamic State commander lies in ruin in Jurf al-Nasr, Iraq, March 8, 2015. Government-backed militia patrolling the town say the building, like many others, was rigged to blow up before the militants were pushed out in October 2014. (Jad Sleiman/Stars and Stripes) 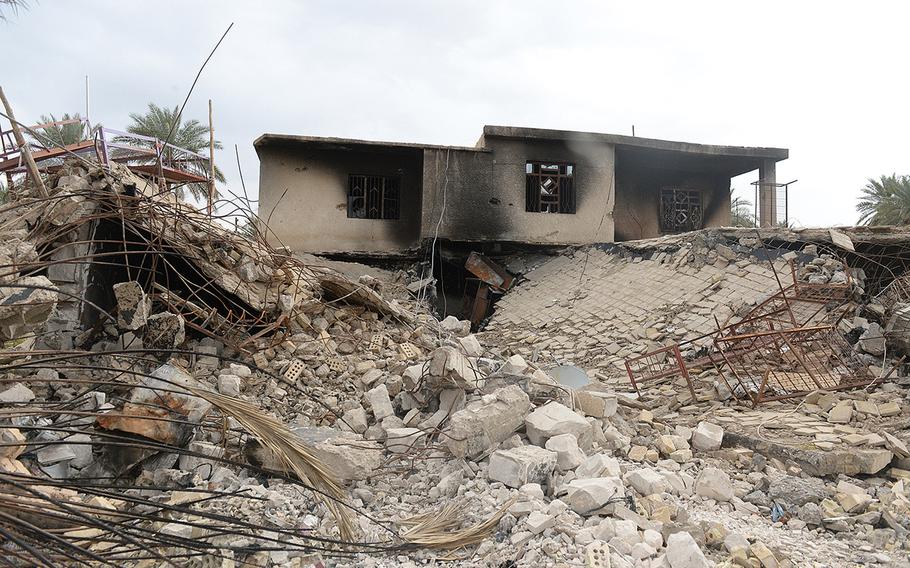 Buy Photo
A building allegedly used by an Islamic State commander as a residence lies in ruin in Jurf al-Nasr, Iraq, March 8, 2015. This, like many other buildings in the town, was rigged to blow up before the militants were pushed out in October 2014. (Jad Sleiman/Stars and Stripes)

JURF AL-NASR, Iraq — It has been months since Shiite militia-led forces pushed the Islamic State out of the only Sunni town in Babil province, yet none of the estimated 80,000 residents has been allowed to return to the devastated community littered with explosives, as there are no combat engineers to clear the bombs and mines left behind.

Iranian-backed militia members patrolling the town say they don’t have combat engineers available to clear it of explosives because those highly specialized soldiers were withdrawn weeks ago to help a government-led offensive around Tikrit, north of Baghdad. Some Sunnis and government critics suspect the real reason is that the Shiite leaders want to drive Sunnis from the strategic area an hour south of Baghdad because they fear many of them support the Islamic State, an overwhelmingly Sunni group.

The dispute over the future of the town — formerly called Jurf al-Sakhar but renamed Jurf al-Nasr, or “Bank of Victory” after it fell to government troops and Shiite militiamen last fall — reflects the challenges that religiously divided Iraq faces in winning support of the Sunni minority. That’s a step U.S. officials believe is essential to defeating the Islamic State after it seized a third of the country in a lightning advance last summer, including Jurf al-Sakhar.

Holding the town could have helped the militants expand to other Sunni communities in the religiously mixed belt south of Baghdad and threaten roads linking the capital to Shiite cities to the south such as Karbala and Najaf.

About 10,000 Shiite militia members pushed the Islamic State out of the town in a two-day blitz in October that followed four months of fighting between the extremists and the Iraqi army that nearly flattened the town.

Few houses remain standing, and those that are have suffered heavy damage from the assault to retake the town. Whole tracts of palm trees lie blackened and splintered in the spaces between homes.

Islamic State fighters routinely plant booby traps in areas they vacate, said Saadik Hassan, a commander of the Iranian-backed Shiite Badr Organization militia. But in Jurf al-Nasr, they went well beyond common pressure-plate bombs. His militiamen have found explosives wired to the electrical systems of homes so that flipping on a light or opening a refrigerator could level a building, Hassan said.

Hassan said one fighter was killed and another was injured while crossing an uncleared section of the town last month.

A Badr Organization commander, who gave his name only as Abu Said, said it could be months before the town is cleared of IEDs. The engineers with expertise in disarming them have been transferred to active fronts north of Baghdad, in particular around Tikrit, where Iraqi security forces and allied militias have reportedly been making gains against Islamic State militants.

“You have to understand that the entire country is at war,” he said. “So once we take an area from Daesh, the engineers are prioritized to another front to take care of the IEDs there.” Daesh is an Arabic acronym for the Islamic State group.

Rafid Juboori, spokesman for Prime Minister Haider al-Abadi, said the government has made helping displaced civilians return home a priority “and that is of course a challenging mission because the war is still going on.”

“The IEDs are a challenge, but so is the reconstruction because this area was heavily damaged,” Juboori said.

Still, the longer Shiite militias and officials keep residents from returning, the more the Sunnis are convinced that the Shiite-dominated government is engaging in sectarian cleansing.

“No one from the displaced citizens from Jurf al-Sakhar or any of the other liberated areas were allowed back into their homes and towns,” said Hamid al-Mottled, a member of parliament from an opposition party that includes Sunnis and Shiites. The government and Shiite militias “want to clear all the southern outskirts of Baghdad from all Sunnis. This is totally illegal, but there is no law in Iraq.”

U.S. officials have long insisted that Iraq will not be able to defeat the Islamic State until it wins over the loyalty of the Sunni minority.

“When you dislocate people, you are creating enemies instead of creating friends,” said Samir Sumaidaie, a Sunni and former Iraqi ambassador to the United States. “If they create more enemies, this is not going to help conquer the challenge of ISIS,” another acronym for the Islamic State group.

Militia commanders warn that the area still faces potential threats from Islamic State forces, which hold territory west of Baghdad, including the city of Fallujah, about 25 miles from the capital. That suggests the Sunni residents may have to wait until Fallujah is cleared before they can return. That is unlikely to happen before Tikrit is fully secured.

Meanwhile, the Shiite militia members have settled in where they can, even repurposing a mosque.

“ISIS used to pray in here,” said an injured fighter, laughing. “Now we use it as a kitchen.”