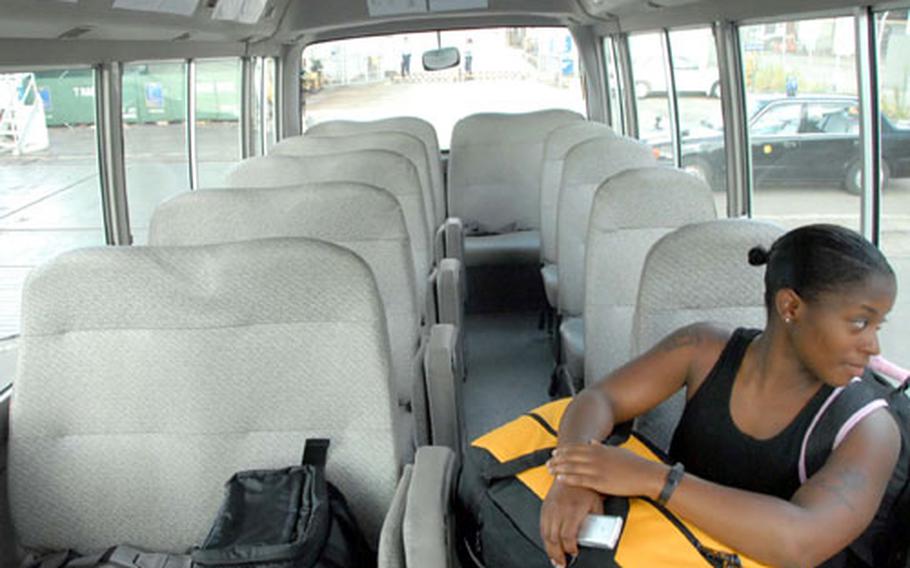 Petty Officer Third Class LaToya Burton rides the new Sasebo base shuttle to do her laundry on Wednesday. The month-long service is free to anyone on base. (Travis J. Tritten / S&S)

The daytime heat at Sasebo Naval Base can make even short walks a sweaty experience. And while a taxi is always nearby to rescue pedestrians, the fares add up.

For one month, a free shuttle will transport anyone across base in air-conditioned comfort.

The service is a pilot program that might become permanent, depending on its popularity, said Teruyuki Suzuki, deputy director of base support vehicles and equipment, a division of the public works department.

&#8220;We will collect the ridership data and the upper chain [of command] will make a decision&#8221; on continuing the shuttle, Suzuki said, adding that the one-month pilot will cost about $5,400, which will be paid from the base transportation fund.

The route opened Wednesday and pedestrians rubbernecked at the large-print &#8220;base shuttle&#8221; sign propped inside the shuttle windshield.

Still, most of the seats on the 29-passenger mini-bus remained empty in the afternoon.

Chief Petty Officer Lucas Robinson was in this week from Yokosuka Naval Base to work on the USS Tortuga and was one of the few afternoon passengers.

Main base comprises three peninsulas and is &#8220;M&#8221; shaped, meaning walking from one side to the other can be a major endeavor.

Robinson said he was taking four cab rides per day to travel to work, lunch and home from the Tortuga dock.

Many sailors and workers resort to cabs because of the lack of base-managed transportation.

Others, such as Petty Officer 3rd Class Tyler Hastings, use a bicycle to get around instead of paying cab fares.

The shuttle now runs every half hour for two hours during the morning, lunchtime and afternoon. It stops at most major facilities on base &#8212; India basin docks, Galaxies, Fleet Gym, the food court, Fleet Landing and the Harbor View Club.

No military ID is required to board, though one must be presented at the crossing of the base&#8217;s back gate.