Free press is a foreign concept in the new Iraq 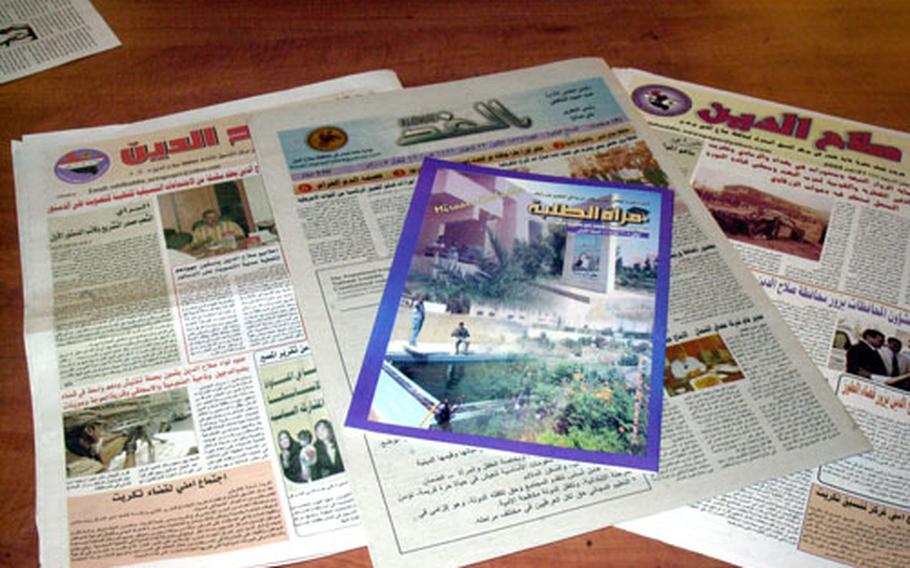 After decades of repression, new media outlets are popping up all over Iraq, many of them funded by the U.S. Army. The outlets have experienced varying success as journalists have been forced to relearn their craft in the new, freer environment. (Erik Slavin / S&S)

Reporters were ushered into a room and listened to a senior Baath party official speak for a few minutes. No one asked questions. Newspapers would come out every few months, running the same articles that ran in previous editions.

With U.S. military aid, Hussain and other Iraqi journalists are attempting to create an independent media in a country that has little tradition of free speech and even less training on journalistic standards and principles.

Despite the obstacles, droves of media outlets have sprung up during the past two years, according to coalition forces and Iraqi journalists.

Hussain&#8217;s content could more aptly be described as &#8220;mostly free.&#8221; Hussain and several other outlets take money disbursed through the U.S. Army. While the Army does not actively edit content, it does not allow its funded outlets to speak out or incite violence against coalition forces.

However, factual stories where the coalition makes a mistake are permitted, said Maj. Rob Rooker, 39, of Richmond Hill, Ga.

Rooker took over the job in February from a psychological operations officer who used to mandate editorial themes each month.

Rooker also does some editorial coaching. For example, he cited a radio report that an explosion had killed 35 and injured hundreds of people.

Those numbers came from a caller, Rooker said. He suggested that the station call the police, then cross-check with the hospital. The revised tally was six people dead and 17 injured.

Most Iraqi journalists have no background or understanding of investigative journalism, Rooker said. Their increasing ability to ask serious questions as least shows progress, he said.

Callers also notify the station when they spot roadside bombs. The station broadcasts the information to listeners while calling Iraqi and coalition authorities.

However, he also says he would criticize the U.S. on some points. For example, he would not support letting male U.S. servicemembers search female Iraqis at checkpoints.

Hussain criticizes the softer news that some of his competitors publish; for Iraq to establish a viable media that serves the public, it will need about three more years of media aid, he said.