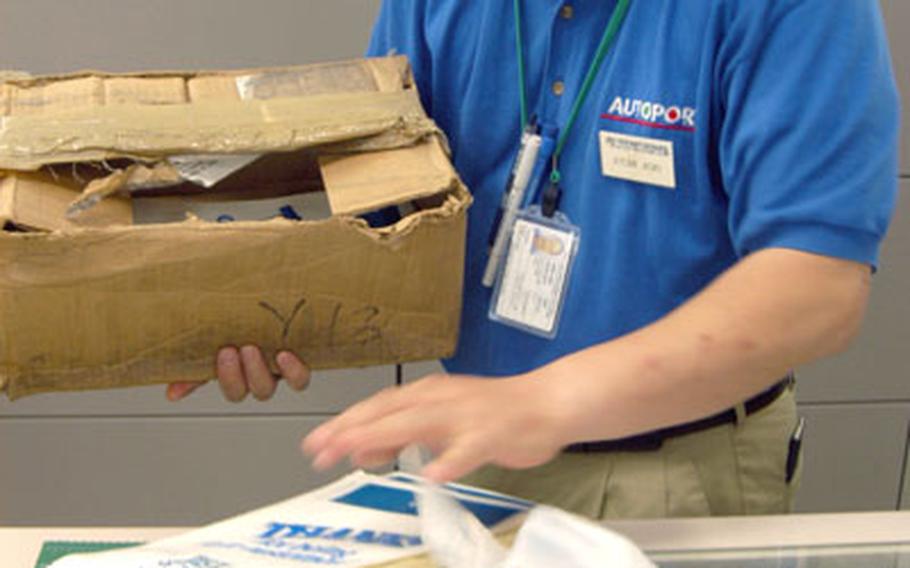 Autoport Automotive Supervisor Ayumi Aoki unpacks the new combination car litter bags/coupons at Yokosuka Naval Base. More than 6,000 bags will be handed out at Yokosuka, Naval Air Facility Atsugi and Sasebo Naval Base as a way to cut down on base garbage. (Allison Batdorff / S&S)

The Navy Exchange operations service manager devotes a full-time employee to picking up trash around Yokosuka&#8217;s NEX. For him, a culture of cleanliness means grabbing up discarded garbage and generally canning litterbug behavior.

Every time a car is serviced at a Navy Exchange Autoport at Yokosuka Naval Base, Naval Air Facility Atsugi or Sasebo Naval Base, the owner will drive away with a small garbage bag bearing a removable $1-off coupon redeemable for any Autoport purchase.

The giveaway started in Yokosuka last week, McMahan said, and was to begin at the other bases once the bags were delivered.

&#8220;There is a lot of emphasis on base beautification these days,&#8221; McMahan said. &#8220;Autoport Manager Thomas Givens, NEX retail manager Rusti Rausch and I thought this would be a good way to help out.&#8221;

After the first 6,000 bags are gone, McMahan will re-evaluate the campaign, he said.