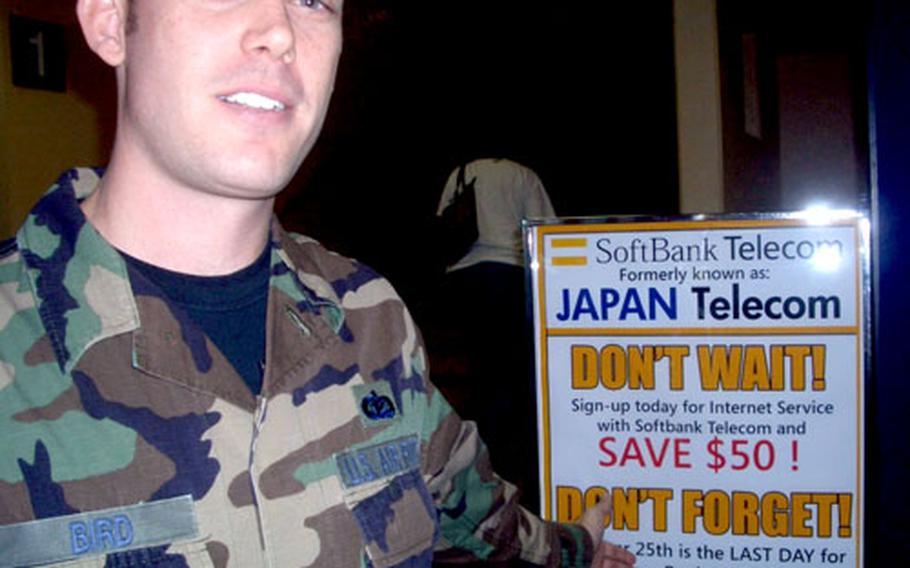 An unidentified airman points to a SoftBank Telecom sign indicating free registration for new Internet customers who signed up by the close of business Wednesday. The company has announced it will continue waiving the $50 connection fee through Tuesday in an effort to alleviate massive lines of former Americable customers at Yokota Air Base. (Brett McCormick / Courtesy of AAFES)

YOKOTA AIR BASE, Japan &#8212; To alleviate massive lines outside its store in the Yokota Community Center, SoftBank Telecom announced it would continue waiving the $50 connection fee for new Internet service through Tuesday.

This week, hundreds of former Americable customers flocked to SoftBank Telecom, the base&#8217;s only remaining option for staying online. Some said they waited in line up to three hours to sign up.

SoftBank Telecom&#8217;s hours of operation in the YCC are 10 a.m. to 8 p.m. daily, but the provider has been staying open a little later each night to accommodate the influx of new customers.

Allied Telesis Capital Corp., the installation&#8217;s new provider of integrated voice, video and data services, plans to have Internet and telephones running in early January and begin offering a cable television package by May, company representatives announced two weeks ago.