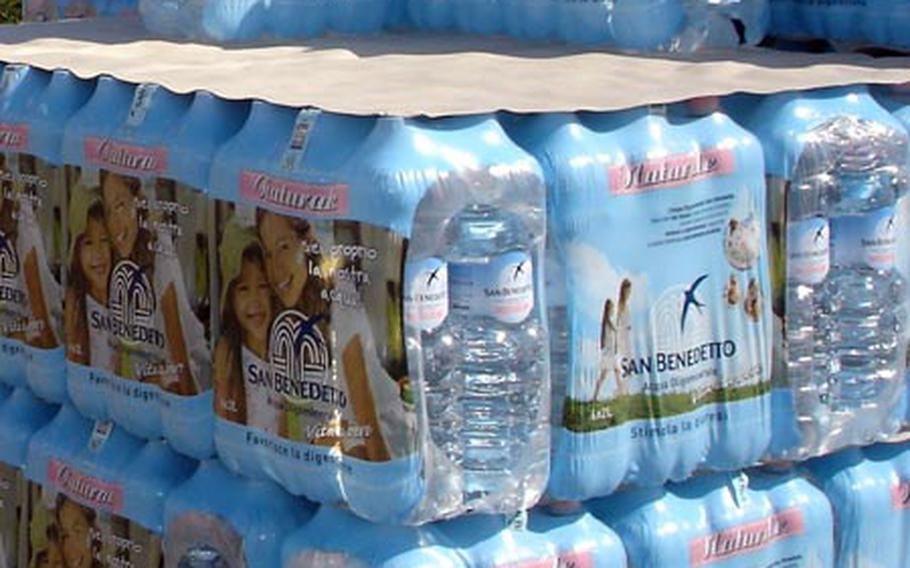 The Navy recently approved an additional $119,000 to purchase bottled water for servicemembers and civilians living off base in the Naples area. (Lisa M. Novak / S&S)

NAPLES &#8212; The Navy&#8217;s program to provide bottled water to off-base residents in Naples will not end in December as previously announced.

On Nov. 25, Secretary of the Navy Donald Winter approved $119,000 to be used by the Navy to purchase water to minimize residents&#8217; exposure to the contaminated water detected in many off-base homes.

Previously, Winter had approved $144,000 to get the free-water program started in September. At the time, Navy Region Europe officials said the water would be distributed until "more permanent solutions can be found and implemented."

Late last month, however, officials said the distribution of bottled water would end in early December as funds for the program ran dry. In the meantime, Navy officials were trying to get local landlords to pick up the tab for the bottled water.

In November, housing officials began requiring landlords to provide approved sources of bottled water for American tenants as a provision for signing new leases. The housing office also plans to renegotiate existing leases on roughly 2,000 homes to include the same requirement. The bottled water distribution program is a result of the Navy&#8217;s health assessment that started in February following concerns over the decadeslong trash and pollution crisis in Naples. Testing of off-base homes has turned up many instances of bacterial contamination, prompting officials to recommend off-base residents use bottled water for drinking, cooking and brushing their teeth.

The Navy now requires water testing in all off-base homes prior to leasing. So far, 167 homes under consideration for leasing were tested. Officials are waiting for the results on 20 of those homes. Of the other 147, 140 were deemed acceptable and only seven were considered unacceptable, officials said.

"For homes pending leases, we are expediting analysis only for bacteria and (volatile organic compound) samples but are still testing for the full range of contaminants. Those results are pending," said Cmdr. Jeff McAtee, spokesman for the Naples public health evaluation.

The Navy also has put several towns in the Naples area off-limits for new leases based on the presence of VOCs detected in tap water of other homes that were tested. Hundreds of servicemembers and civilians live in those areas, dubbed New Lease Suspension Zones, but are not required to move.

Once those houses are vacated, the Navy will test the water before new residents are allowed to sign leases.