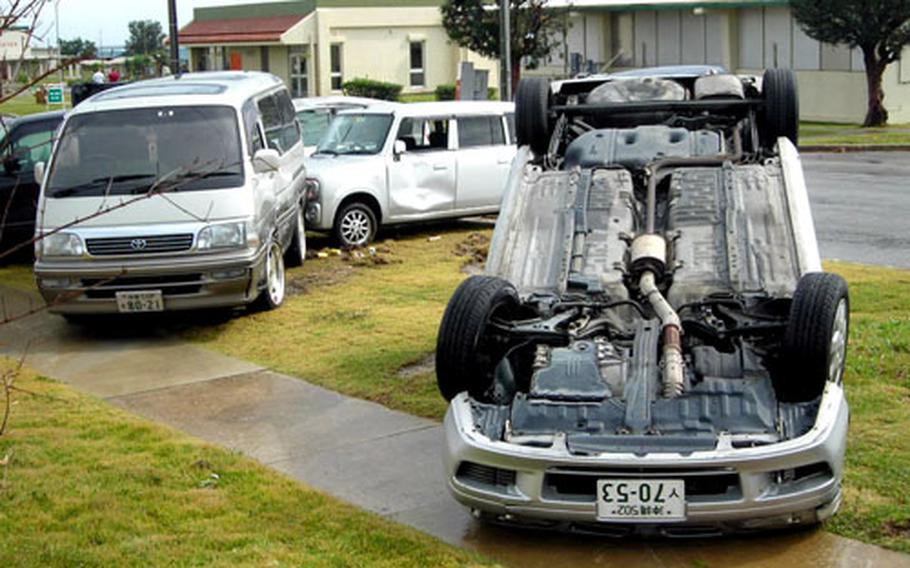 Japanese meteorologists said Saturday evening that they&#39;d not yet determined whether a tornado was involved in the storm that damaged these cars. (Courtesy of American Engineering Corp.) Passerby survey damage to a car struck by a severe wind gust that hit Camp Schwab on Saturday. (Courtesy of American Engineering Corp.)

CAMP FOSTER, Okinawa &#8212; Three Marines were injured, 21 cars were tossed about and several buildings were damaged when a freak gust of wind hit Camp Schwab on Saturday afternoon.

The severe gust occurred when a well-developed thunderstorm passed over Northern Okinawa about 1 p.m., according to Seiya Kyoda, a weather forecaster with the Okinawa Meteorological Observatory.

The wind blast struck in the area of the Camp Schwab Post Exchange, according to Okinawa Prefectural Police and Marine officials.

&#8220;The path was about 50 meters wide and 200 meters (54 yards by 218 yards),&#8221; said Hirokatsu Oyadomari, a prefectural police spokesman. &#8220;Most of the damage was on Camp Schwab, although four fishing boats at the Henoko Fishing Port also received minor damage. No other off-base damage was reported.&#8221;

&#8220;Approximately 21 private cars belonging to both Okinawans and Marines were damaged, some severely,&#8221; Marine 2nd Lt. Brian Block said of the damage on Camp Schwab. &#8220;The camp post office also received minor damage to one of its doors.&#8221;

He said an enlisted barracks, the enlisted club and the camp theater also received minor damage.

&#8220;Three Marines at the exchange at the time also suffered minor injuries and were taken to the camp medical clinic for treatment,&#8221; Block said.

&#8220;In addition to the vehicles, the exchange parking lot was damaged as well. An electrical transformer was damaged and power lines were knocked down.

He said base emergency personnel were at the scene within 15 minutes.

Tornados are rare in Okinawa, Oyadomari said. The last one in Northern Okinawa hit the Henoko area two years ago. However, strong gusts during thunderstorms and typhoons occasionally topple parked cars.