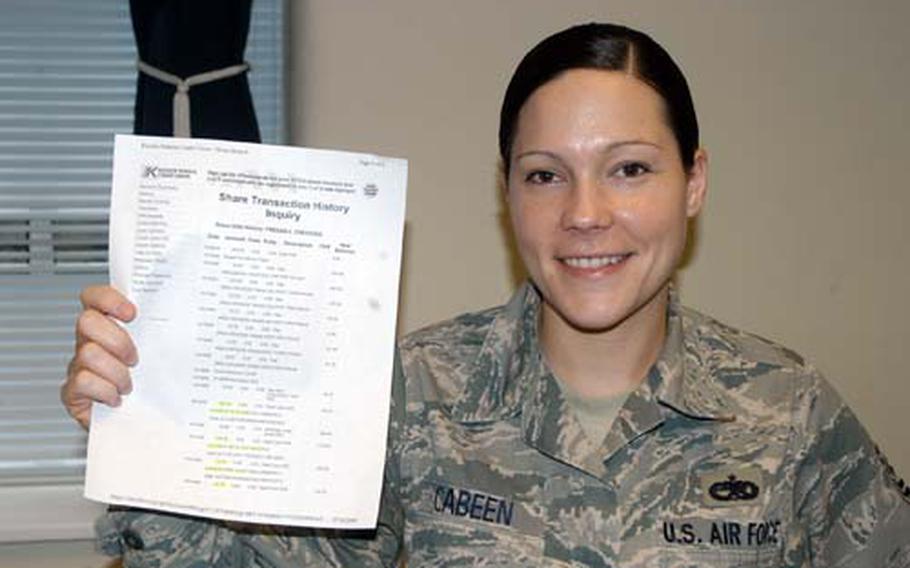 All of the account holders affected had visited Spain sometime this year, according to Michelle Foster, a loss prevention manager for Keesler.

All the losses were from customers&#8217; debit cards which have Visa logos on them. A spokeswoman for Visa&#8217;s Europe press office said the company is aware of a possible card data security issue in Spain but would not comment on any specifics regarding the number of cardholders affected because of an ongoing investigation. Visa Europe contacted the affected banks and credit unions upon discovery of the possible fraud, according to the press office.

Tech. Sgt. Abbi Cabeen was one of those affected.

The 100th Air Refueling Wing airman said she was surprised recently when her debit card was denied while she was out shopping for a new coffee maker. She was certain she had money in the account.

She checked her account before leaving the store parking lot via her mobile phone and noticed the fraudulent charges.

Cabeen said she certainly didn&#8217;t spend the $539.16 from her account on expensive clothes from boutiques in the suburbs of Chicago this month, and she didn&#8217;t buy any nice decorative products from Bath and Body Works either.

When she went to the credit union at Mildenhall to dispute the erroneous charges, an employee told her that a dozen other customers had reported similar problems. The employee asked her if she had visited Spain recently, Cabeen said.

Cabeen said her family had taken a vacation in June to the southeast coast of Spain. The only time she used her debit card was for a souvenir, which cost 20 euros, at a mom-and-pop store near the beach.

As of Friday, the fraud has affected a dozen or so Air Force personnel at RAF Mildenhall.

"As soon as we found out (about the fraudulent charges) we jumped on it right away," Foster said.

Foster said all affected Keesler members have been notified, but it is still possible for more to surface.

Representatives from Community Bank, which has offices in several countries in Europe, have reported no fraudulent activity.

Pentagon Federal Credit Union did not respond to multiple queries by Stars and Stripes.

Anyone who suspects fraudulent activity with his accounts should contact his financial institution immediately and must file a claim in a timely manner, Foster said.