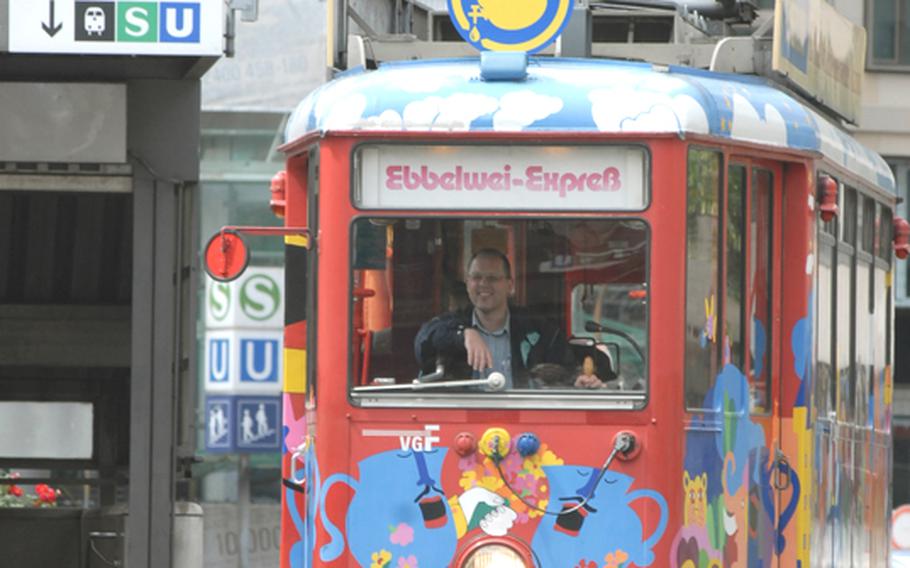 Buy Photo
An Ebbelwei-Expess tram rolls into the main Frankfurt train station to pick up customers for its hourlong tour. Passengers can board the tram at 23 tram stops in Frankfurt. Most people start at the zoo tram stop or at the city's main train station. (Mark Patton/Stars and Stripes)

Buy Photo
An Ebbelwei-Expess tram rolls into the main Frankfurt train station to pick up customers for its hourlong tour. Passengers can board the tram at 23 tram stops in Frankfurt. Most people start at the zoo tram stop or at the city's main train station. (Mark Patton/Stars and Stripes) 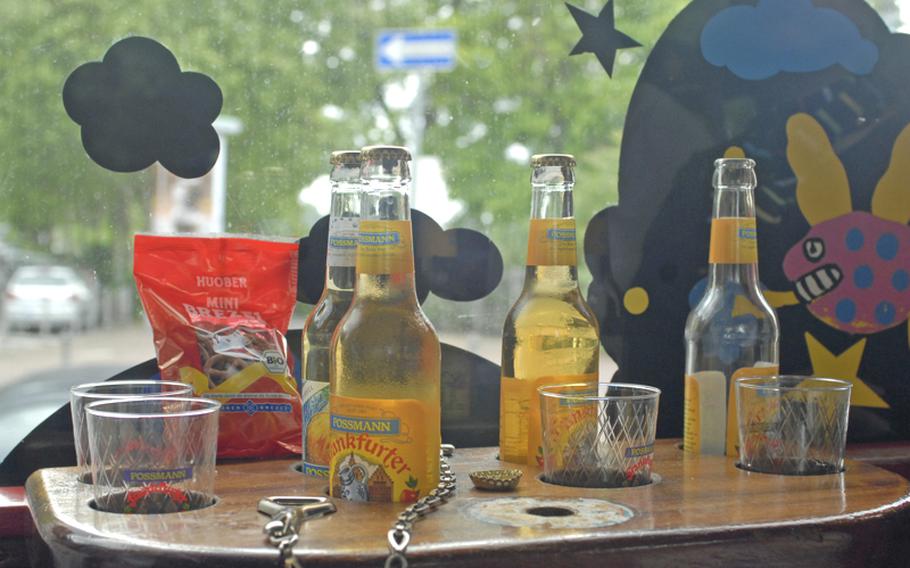 Buy Photo
Bottles of Apfelwein sit beside the window on the Ebbelwei-Express in Frankfurt. The history of apple wine in Frankfurt dates back more than 1,200 years ago, and the 'Ebbelwei' in the tram's name pays homage to the localt pronunciation of the popular drink. (Mark Patton/Stars and Stripes) 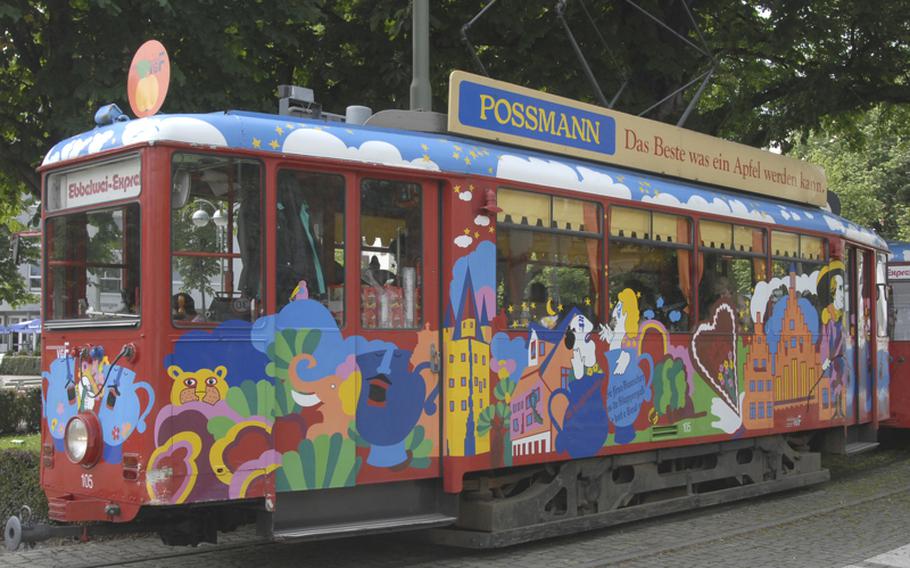 Buy Photo
The Ebbelwei-Express runs Saturdays, Sundays and most German holidays. Passengers can climb aboard the tram at 43 stops and take the hourlong tour of the city while enjoying apple wine or apple juice. (Mark Patton/Stars and Stripes) 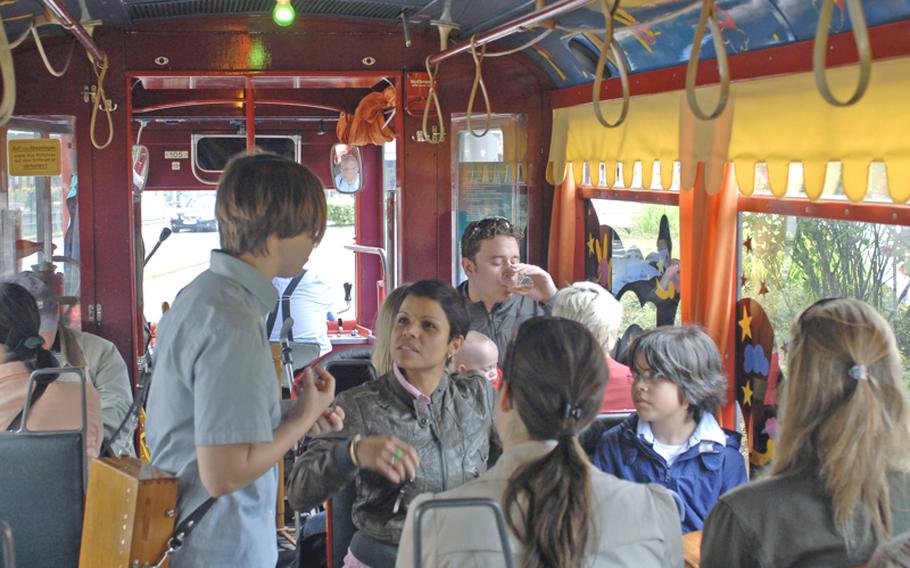 Buy Photo
With the lively atmosphere inside the tram, it's easy to forget to enjoy the views of Frankfurt as the Ebbelwei-Express travels around most of the interesting and picturesque parts of the city. You may need a second trip just to see what you missed the first time. (Mark Patton/Stars and Stripes)

As I stood outside the main train station in Frankfurt, Germany, and watched a tram that looked like a traveling carnival approach, I didn&rsquo;t care where it was going. I knew I wanted to climb aboard.

Anyone looking for a relaxing ride through Frankfurt should hop on the Ebbelwei-Express to view all the city&rsquo;s major sights, meet people from around the world and drink the city&rsquo;s famous Apfelwein, or apple wine.

&ldquo;What is special is the age and the design of the wagons, which are about 60 years old,&rdquo; said Ren&eacute; Hess, a customers assistant. Hess said many of the images painted on the tram are nods to landmarks in Frankfurt.

The history of Apfelwein in Frankfurt dates back more than 1,200 years ago, and it&rsquo;s still made in much the same manner, albeit with more modern machinery. The Ebbelwei in the tram&rsquo;s name pays homage to the local pronunciation of the popular drink.

Once customers take their seats on the tram among colorful lights and funky drawings on the windows, an attendant comes by to take the 6-euro fare for the hourlong tour and to offer passengers a bag of pretzels and a bottle of Apfelwein (pure or mixed with carbonated water) or apple juice, which is included in the fare.

With Frankfurt&rsquo;s bustling international banking scene, it&rsquo;s no surprise that the Ebbelwei-Express is usually filled with an eclectic mixture of young and old from across the world. It&rsquo;s easy to tell the locals though, because as the ride progresses and they fill up with Apfelwein, many start humming the traditional German songs that are played on the tram.

&ldquo;It&rsquo;s a nice place to take a break from the walking crowd and to listen to this nice music,&rdquo; said Austrian Werner Schuster, who was in town visiting friends.

With the lively atmosphere inside the tram, it&rsquo;s easy to forget to look outside as the tram travels through most of the interesting and picturesque parts of the city, and to miss the views of the cathedral and from the Main River bridges.

There are no guides on the tram to tell passengers what they&rsquo;re seeing, but there are free pamphlets &mdash; available in English and German &mdash; that describe all the sights along the route. The tram runs a circular route &mdash; with brief stops along the way &mdash; and passengers can also depart the train at any location if they want to explore a certain part of the city. However, if you get off the Express and it moves on, you cannot get back on a later one without paying another fare.

&ldquo;Walking around Frankfurt, the city seems so modern, but on the train you feel how it was a long time ago,&rdquo; said Ukrainian Olga Radiontseva. &ldquo;I enjoy the tradition and spirit of old Germany.&rdquo;

The tram can be rented for business or private gatherings, something attendants say makes an unusual birthday party. Groups renting the tram can also plot their own course upon request.

You don&rsquo;t have to be a stranger in Frankfurt to enjoy the ride, as Frankfurt native and resident Barbara Schmitt pointed out. &ldquo;I ride the Ebbelwei-Express a couple of times a month to get distracted. &hellip; I like to meet people, talk to them and get out,&rdquo; she said.

When the hourlong trip is up, be warned that you may want to stay for another round with your new friends and take in the views you might have missed the first time around.

Food: If you are craving more than pretzels, you can get off the Ebbelwei-Express at any point and eat at one of the many restaurants in Frankfurt. Sachsenhausen is a popular district for more Apfelwein and German food.

Information: The tram&rsquo;s website (available in English) is www.ebbelwei-express.com. It has route details and a form to request the Ebbelwei-Express for a private party. For reservations or more information, can call +49 (0)69-213-224-25.

Direcitons: You can board the Ebbelwei-Express at 23 tram stops in Frankfurt. Most passengers start at the zoo tram stop or the city&rsquo;s main train station (Hauptbahnhof).

Times: The tram runs Saturdays, Sundays and most German holidays beginning at 1:30 p.m. with the last round-trip tour starting at 5:35 p.m. from the zoo. Groups looking to rent the Ebbelwei-Express can choose any day of the week.