Visitors to the Frankfurt Book Fair check out what is new at one of the stands, while booksellers and buyers get down to business in the background. (Michael Abrams / S&S)

Visitors to the Frankfurt Book Fair check out what is new at one of the stands, while booksellers and buyers get down to business in the background. (Michael Abrams / S&S) Visitors to the Frankfurt Book Fair see what is new on the market at the Taschen company&#39;s stand. More than 200,000 visitors are expected at the fair, which runs through Sunday. (Michael Abrams / S&S) 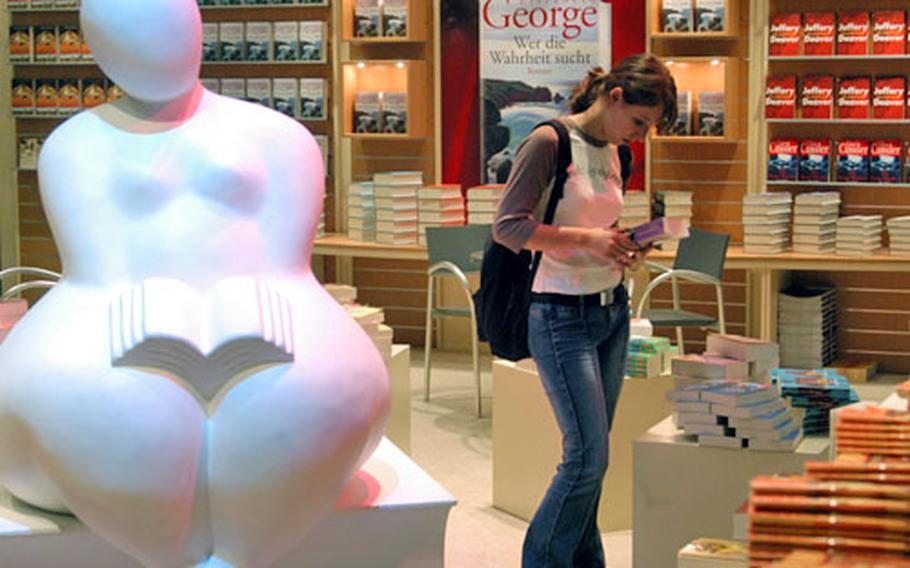 The Frankfurt Book Fair is considered to be the world&#39;s largest. It is open to the general public on Saturday and Sunday. (Michael Abrams / S&S)

The Frankfurt Book Fair, which will be open and selling to the public Saturday and Sunday, features an expansive selection of books, magazines, films, software, calendars, bookmarks and toys from around the world.

There are children&#8217;s books, comics, maps and do-it-yourself manuals. There are books on people, history, cooking, fashion, photography, travel and just about any other fiction or nonfiction book imaginable from 111 countries and myriad languages.

The book fair calls itself &#8220;the biggest literary festival worldwide.&#8221; This year there are 6,648 publishers and companies covering an area of 42 acres within the multistory steel-and-glass halls of the Frankfurt Messe, ready to offer insight into their culture and countries through literature, as well as through food, drink and language.

Visitors are given maps as they arrive, and there are larger maps in front of each hall to help bookworms navigate the fairgrounds. Good walking shoes are suggested.

This year&#8217;s display is slightly larger than last year&#8217;s, with about 350,000 titles to view. Though some items are for sale during the event, many new books are just for viewing, but can be ordered from bookstores while at the fair.

The Arab World is this year&#8217;s guest of honor. Exhibits showcase Arab handicrafts, posters and shelf after shelf of Arabic books in many languages on an entire floor in Hall 6. There are U.S. military books translated into Arabic, as well as war on terror books in English.

The library-quiet hall also showcases the Arab world&#8217;s move into technology with a large computer room and film viewing area. Digital copies of manuscripts written before Christ on papyrus are displayed on computer screens, with multi-language speaking assistants explaining how to view the manuscripts, which are usually locked behind museum glass.

In other halls, where many countries are lined back-to-back, English-language readers can get a feel of what&#8217;s up and coming in the literary world with displays from the United States, United Kingdom, Canada, Australia and many other English-speaking countries. There are about 1,600 displays in Hall 8 for English speakers.

U.S. publishing companies line up their favorites and showcase what will be on bookshelves in the coming months.

&#8220;This will have strong military sales and will be sold at [Army and Air Force Exchange Service] BookMarks.&#8221;