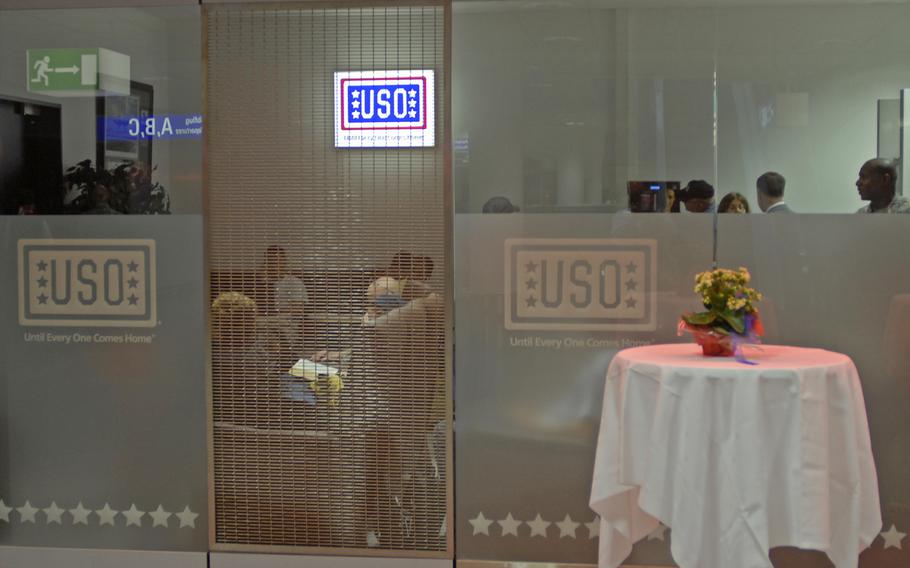 May 26, 2010 marked the grand-opening of the improved USO lounge at Frankfurt International Airport located in Terminal 1, Arrival Hall C. The lounge will close permanently on April 14, 2016. (Stars and Stripes)

May 26, 2010 marked the grand-opening of the improved USO lounge at Frankfurt International Airport located in Terminal 1, Arrival Hall C. The lounge will close permanently on April 14, 2016. (Stars and Stripes) 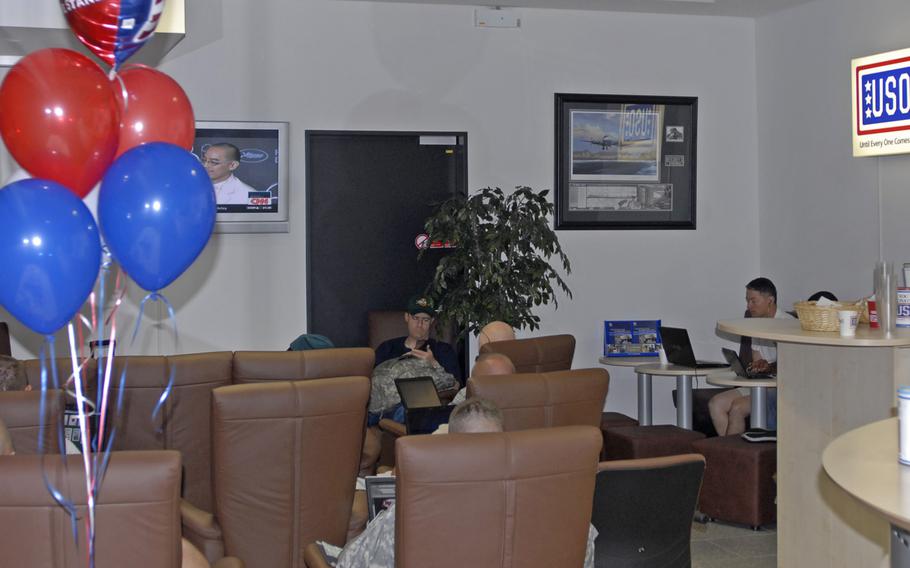 Soldiers enjoy the improved USO lounge at Frankfurt International Airport on May 26, 2010, following a grand-opening ceremony at its new location in Terminal 1, Arrival Hall C. The lounge will close permanently on April 14, 2016. (Stars and Stripes)

KAISERSLAUTERN, Germany — The USO will permanently close its lounge and reception area at Frankfurt Airport later this month after nearly 41 years in operation, citing dwindling visitor numbers and the changing security environment in Europe.

The announcement comes two weeks after the terrorist attacks at the Brussels airport renewed criticism of security at airports across Europe.

But Murren said the decision was considered over time.

“This was not arbitrary,” Murren said in a telephone interview Monday. “It was a hard decision.”

The USO lounge has been a welcome retreat for Americans since May of 1975, providing military personnel and families a place to grab a snack or cup of coffee before or after a long flight. They also could make free calls to the States, ask for help, relax, and in recent years, use the Internet and check email.

But visitor numbers to the center have dropped by more than half following the March 2011 shooting in which two U.S. airmen on their way to Afghanistan were killed in an attack on an American military bus at the airport. The shooting led U.S. Army Europe to send some 1,500 incoming personnel and their families per month through Ramstein Air Base instead of Frankfurt, beginning in 2012.

That change has affected the number and types of visitors using the USO at Frankfurt.

In the last three years, the number of people using the airport USO has gone “from a steady 3,000 to less than 1,000 a month,” Murren said.

Most people using the center these days are military personnel and families waiting for a commercial shuttle, he said. They typically stay for 20 to 30 minutes. It’s also the place where family members of servicemembers traveling to Germany tend to meet up with their relatives.

The center was intended to augment the Army’s reception operation, giving incoming personnel and families a place to wait for their sponsor and get help with issues such as a forgotten leave form, a missed flight, lost luggage or other transportation arrangements, Murren said.

“We were never established there for people on vacation,” he said. “It just happened to become part of the mission after a while, as things changed.”

“As the threat continued to grow, we found ourselves being very vulnerable,” he said. “We had troops gathering there for shuttles, many times 10 or more troops for 20 minutes or so.”

After the Paris terror attacks in November, the USO asked the military to conduct another vulnerability assessment of its airport center and tried, unsuccessfully, to find a different, more secure location that would allow it to still meet its mission.

“It hurts to make that decision,” he said of the closure. “We have people there who have been working for us for years. Their job will end on the day we close.”