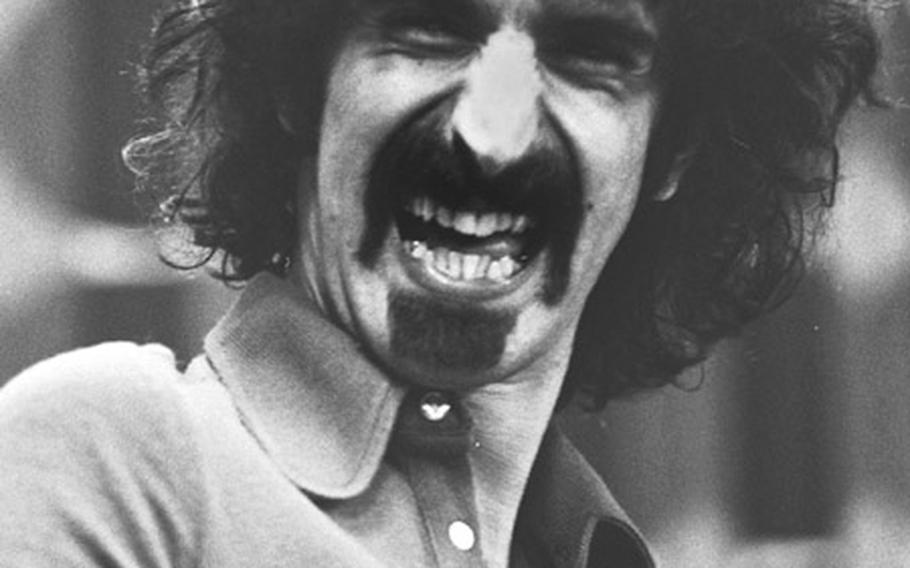 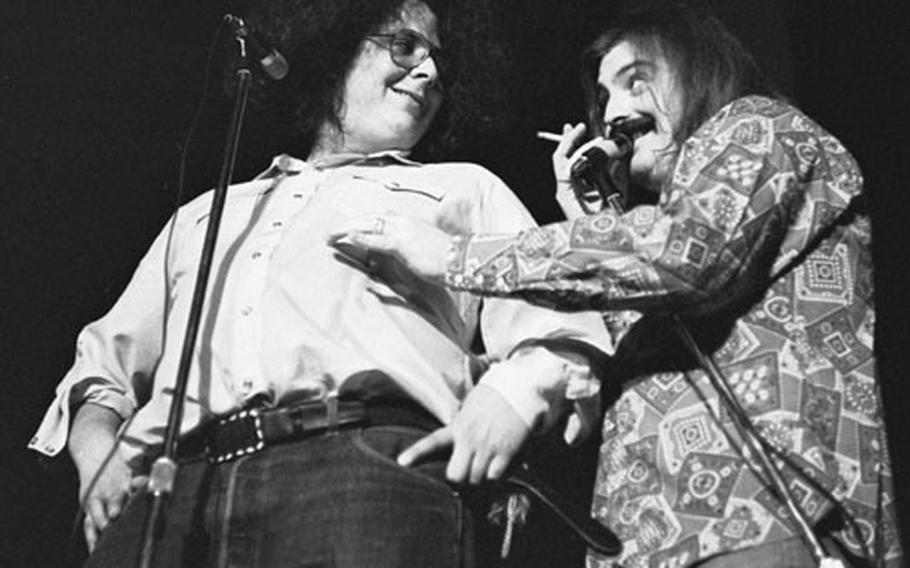 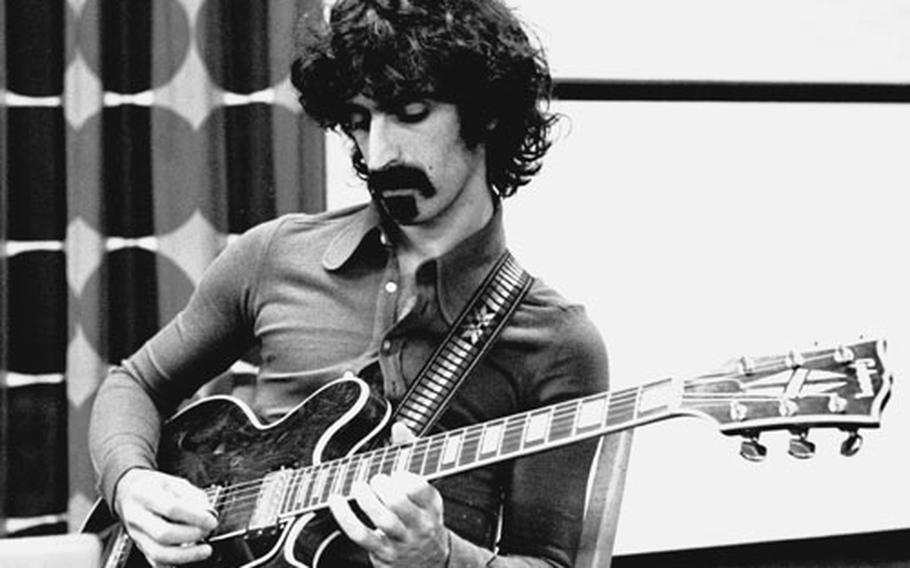 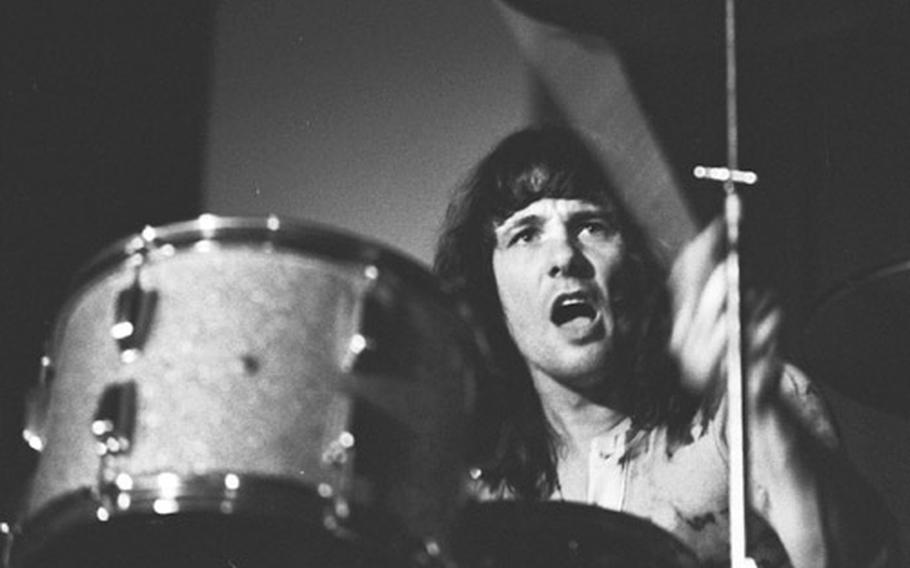 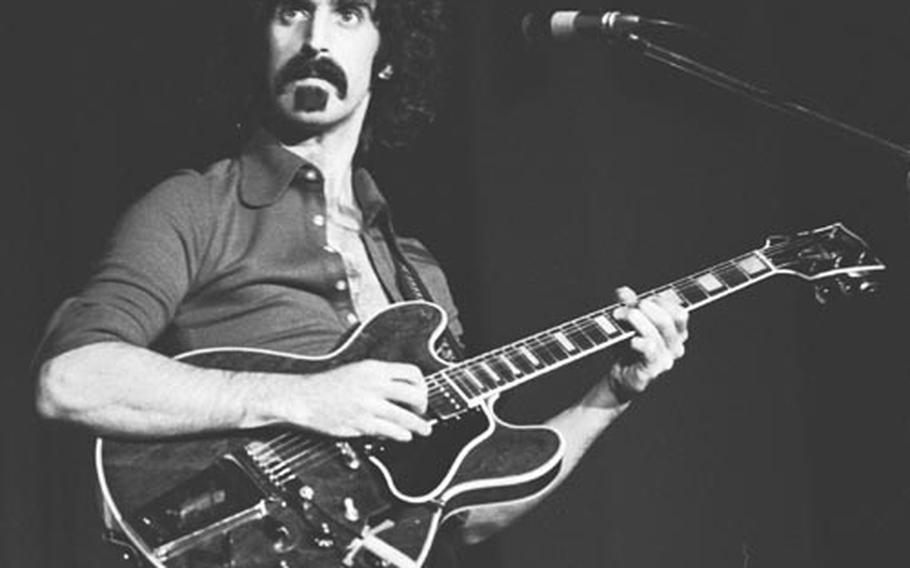 FRANK Zappa, in a simple blue knit shirt and velvet slacks, stands aloof on the left side of the six-foot-high stage. His thin frame leaps into the air, and the brilliant rock-jazz sound of the new Mothers of Invention captivates the audience. In a swift, decisive movement, Zappa's right hand moves downward and there is abrupt silence.

Frank Zappa &mdash; famous for once posing on a toilet seat, for insulting audiences, and described by critics as a freak &mdash; played it straight Saturday night during a Frankfurt concert.

Those who came for a show were not disappointed, although Frank was content to direct, rather than star, in his new group. The new Mothers of Invention fuse rock, jazz, and theatrics into 2&frac12; solid hours of total entertainment. Without question, Zappa &mdash; when the mood strikes him &mdash; is a serious and talented musician-composer.

Granted, almost all of his lyrics are "obscene," but that's only a problem for the "old" straight world, rather than the "young" adults who find them highly amusing.

The new Mothers were handpicked by Zappa. Each is an accomplished musician in his own right, all are professionals. Mammoth Mark Volman and Howard Kaylan, who do the majority of the singing and dialogue, were previously the lead singers for the Turtles. George Duke's talents on the bass trombone and electric piano add tremendously to the Mothers' music. Jeff Simmons, an anemic looking bass guitar player, has recorded on his own. Aynsley Dunbar &mdash; instead of being hidden like many drummers &mdash; is center stage front, indicating what Zappa thinks of Dunbar's abilities. Not to disappoint the audience, Dunbar did a solo near the end of the concert which was a masterpiece.

Then there is reliable Ian Underwood, the only survivor of Zappa's wrath which led to his firing of the first Mothers about a year ago. Ian plays a solid organ which complements the total sound rather than overwhelming it, as happens in so many groups.

In short, Zappa has surrounded himself with six professionals who enjoy performing his music and skits. What makes the show move is the performers' obvious enjoyment on stage. They're loose and honest with the audience while enjoying themselves immensely.

"We have a certain feeling other groups miss," Volman said backstage. "We have a good time. ... we really dig it rather than get serious. People feel that." Anyone who sees the new Mothers of Invention will know that's an understatement.

On their European tour, which continues through Dec. 17, the Mothers are experimenting with music and ideas for a film. The theme is a natural for Zappa and the new group: the story of a rock group on the road. Necessity dictates that the lyrics have sexual overtones and they are, to say the least, descriptive and earthy. The tentative title of the film, set for shooting in England next year, is "200 Hotels."

Few in the audience Saturday probably knew what Mark meant when he over the mike; "I never had trouble getting any when I was a star in that other group (The Turtles)." Only minutes before the concert a pretty German bird had made advances to Ian and Frank. "But only you two," she emphasized.

Zappa took time out in the middle of the concert to cut down German radicals. In Berlin several years ago, a Mothers concert was interrupted after Zappa refused to encourage a crowd to burn down the "Allied Command" Building. "I'm sorry, boys and girls," he recalled saying "I told them it was bad mental health." Then he sang a number based on the incident and ridiculing the students, "The Duke."

Throughout the show, Zappa is seldom the center of attention. In fact, one is hardly aware of him on stage. But then, that's the way Zappa wants it. He is the musical director and theatrical producer more than a performer.

"It's not a pop group at all," explained Volman. "It's a small traveling orchestra to do Frank's thing."

With Zappa leading such a talented group of musicians, the new Mothers of Invention are having a ball, while doing it all.