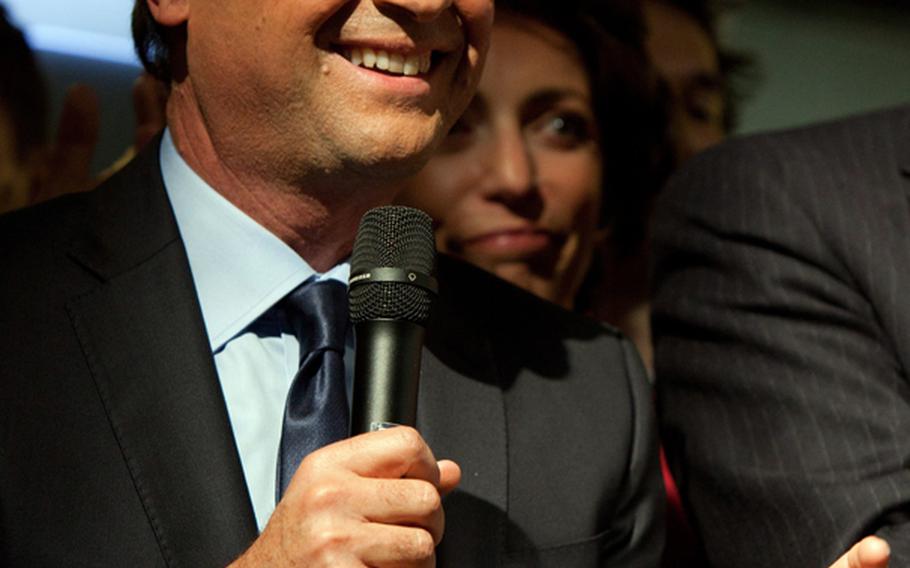 French President-elect Francois Hollande, seen here speaking to supporters in Paris on October 16, 2011, promised during his campaign to withdraw his country's troops from Afghanistan by the end of 2012. (Revelli-Beaumont-Chamussy/MCT file photo)

KABUL &mdash; NATO officials in Kabul deferred comment Monday on the possibility that France could further accelerate its withdrawal from Afghanistan, as promised by French President-elect Francois Hollande, but noted that France has signed a long-term commitment to Afghanistan beyond 2014.

&ldquo;I will not comment on any possible decisions that the very newly elected French government might take in the future,&rdquo; German Brig. Gen. Carsten Jacobson, a spokesman for the U.S.-led coalition in Afghanistan, said at a news conference Monday. &ldquo;But France has committed itself very clearly in one of the first strategic partnership agreements with Afghanistan to a long-term commitment way beyond 2014.&rdquo;

In January, outgoing French President Nicolas Sarkozy announced he would withdraw his country&rsquo;s troops by the end of 2013, a year earlier than initially agreed, after four French troops were shot dead by an Afghan soldier. Sarkozy made the announcement as he and Afghan President Hamid Karzai signed a treaty of friendship and cooperation.

During his campaign, Hollande pledged to withdraw France&rsquo;s combat troops by the end of this year.

The continued involvement of France&rsquo;s troops in the Afghan campaign will come up at the NATO summit in Chicago that begins May 20 &ndash; five days after Hollande is scheduled to take office. With 3,308 troops in Afghanistan, according to International Security Assistance Force figures, France is the fifth-largest contributor of forces to the military coalition. It has primary responsibility for Kapisa province, northeast of Kabul.

Hollande&rsquo;s win came the same day another coalition troop was gunned down in a so-called &ldquo;green-on-blue&rdquo; incident &mdash; the term used for attacks on coalition personnel by Afghan security forces.

That incident was the 14th green-on-blue attack this year, in which 19 ISAF troops have been killed, Jacobson said.

In March, Marine Gen. John Allen, commander of U.S. and coalition troops in Afghanistan, said such attacks are &ldquo;a characteristic of this kind of warfare.

The number of green-on-blue attacks has risen sharply over the last year, coinciding with an increase in coalition forces partnering with Afghan forces. Coalition mentorship of Afghan units at all levels is a key part of the coalition&rsquo;s strategy to prepare Afghan forces to take the lead throughout the country sometime in 2013.

Afghan forces are on track to take on that responsibility as planned, according to Jacobson.

&ldquo;We are firmly on track with the timetable that was set in Lisbon in 2010,&rdquo; he said, referring to the most recent NATO summit, held in Portugal. &ldquo;In 2013, we&rsquo;ll see the transition through.&rdquo;

Hollande&rsquo;s win opens the possibility that French forces may not remain to see that milestone through. Dominic Medley, spokesman for NATO&rsquo;s senior civilian representative in Afghanistan, played down that possibility in remarks Monday.

&ldquo;France has made clear its commitment to supporting and training the Afghan national security forces after 2014,&rdquo; he said, &ldquo;and it&rsquo;s those issues that will be discussed with the new president of France at the NATO summit in Chicago in two weeks&rsquo; time.&rdquo;