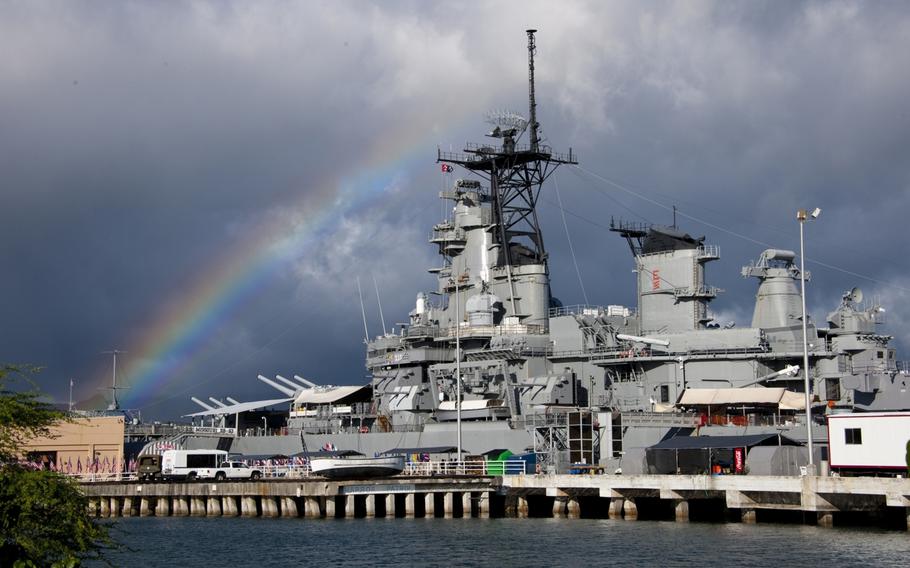 A rainbow crosses over the top of the Battleship Missouri Memorial in 2014. Fox Sports 1 will use the Missouri's bow as home base for programming, including college basketball and the Big Ten football championship in Indianapolis, on Saturday, Dec. 5, 2015. (Makoto Maeda/Japan Maritime Self-Defense Force)

A rainbow crosses over the top of the Battleship Missouri Memorial in 2014. Fox Sports 1 will use the Missouri's bow as home base for programming, including college basketball and the Big Ten football championship in Indianapolis, on Saturday, Dec. 5, 2015. (Makoto Maeda/Japan Maritime Self-Defense Force) 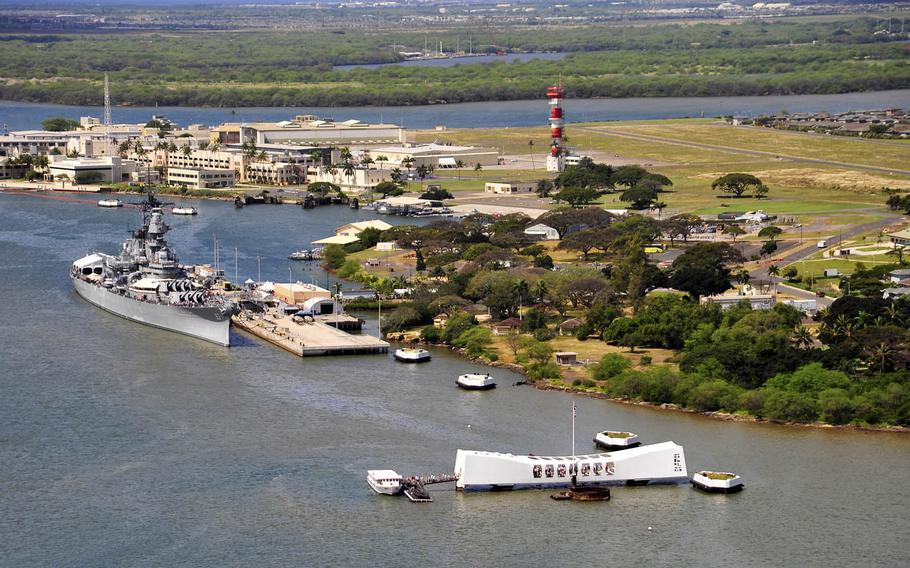 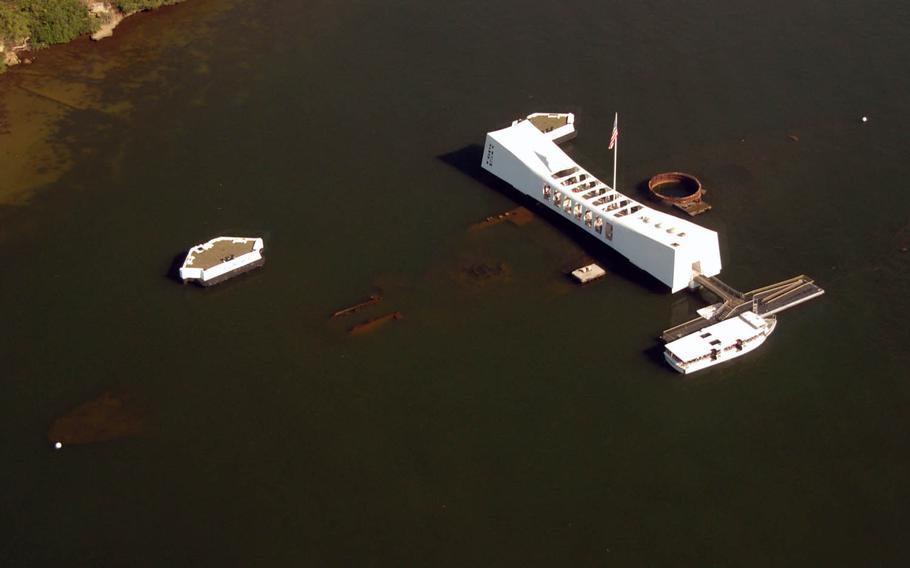 A U.S. Navy white boat sits moored at the pier of the USS Arizona Memorial while visitors pay tribute to the ship's fallen sailors and Marines. The memorial sits directly above the sunken Pennsylvania-class battleship at Pearl Harbor and is marked at the bow and fantail by two white buoys. (James Foehl/U.S. Navy) 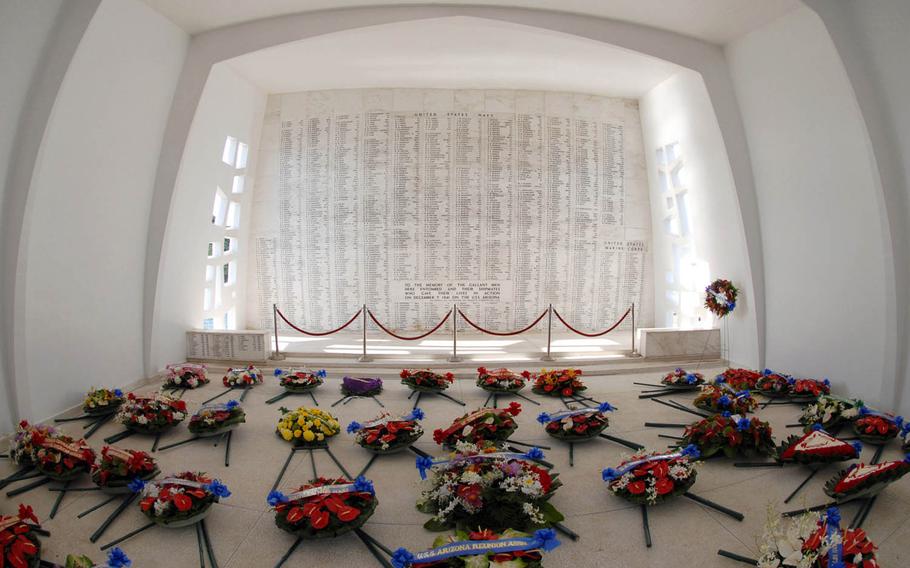 Wreaths serving as a tribute to servicemembers killed during the Dec. 7, 1941, attack on Pearl Harbor, adorn the USS Arizona Memorial in 2007. (Jeremy S. Brandt/U.S. Navy) 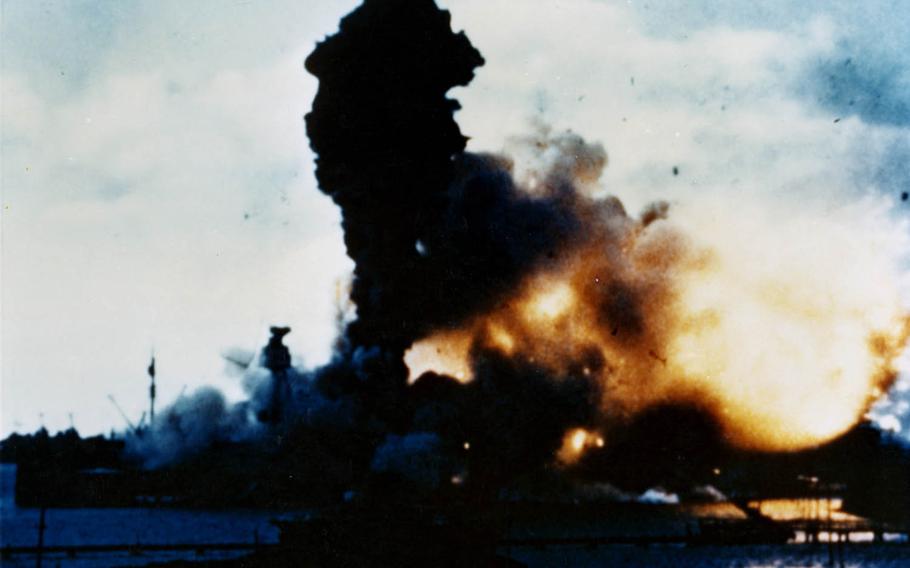 The forward magazines of the USS Arizona explode Dec. 7, 1941, during the Japanese attack on Pearl Harbor, Hawaii. (Courtesy of the U.S. Navy) The USS West Virginia, sunken at left, and USS Tennessee are shrouded in smoke Dec. 7, 1941, following the Japanese attack on Pearl Harbor, Hawaii. (Courtesy of the U.S. Navy)

FORT SHAFTER, Hawaii — Traditional ceremonies marking the anniversary of Japan’s surprise attack on Pearl Harbor will share the spotlight this year with something much less solemn: sports.

As the National Park Service live-streams Monday’s commemoration of the World War II attack’s 74th anniversary, Fox Sports will broadcast segments of its weekend game coverage from the deck of the Battleship Missouri Memorial, culminating in the Navy vs. Oregon basketball matchup inside historic Bloch Arena at Joint Base Pearl Harbor-Hickam in Honolulu.

Fox Sports 1 will use the Missouri’s bow as home base for Saturday’s programming, including college basketball and the Big Ten football championship in Indianapolis.

The Pearl Harbor-based coverage culminates Monday with two college basketball games — Oklahoma vs. Villanova and Navy vs. Oregon — from Bloch Arena, which served as the venue for a Navy band competition the night before the attack.

“Fox Sports is honored to call Pearl Harbor home during this year’s commemoration, an extremely fitting location to show our respect to the men and women of our nation’s armed forces, past and present,” Eric Shanks, president of Fox Sports, said on the network’s website. “We appreciate the military’s cooperation with this endeavor, and we hope to return to Pearl Harbor in 2016 to pay solemn tribute on the 75th Anniversary.”

The park service will stream three live events, along with prerecorded educational programs, on Monday at www.pearlharborevents.com/live-stream. The live coverage — including a Q&A with park experts — begins at 7:40 a.m. Hawaii Standard Time on Kilo Pier, with historian David Kennedy as keynote speaker. The ceremony is open to the public, but those attending are required to park at Aloha Stadium and take a free shuttle to the pier.

Live coverage resumes at 1:30 p.m. with a ceremony for the USS Oklahoma on Ford Island. The event honors the loss of 429 crewmembers of the Oklahoma, which was moored along Battleship Row and sank after being hit with as many as 12 torpedoes.

At 4 p.m., the park service and Navy will stream the interment of Joseph Langdell’s cremains at the USS Arizona Memorial. Langdell was an ensign aboard the ship when it sank the day of the attack. The memorial includes a list of names of those who died aboard the ship. Survivors have the option of placing an urn containing their remains on the submerged ship, and their names will then be added to the list.

Among the prerecorded programs is the Blackened Canteen Ceremony, which will take place Sunday at sunrise. The blackened canteen was recovered from a B-29 bomber that collided with another B¬29 over Shizuoka, Japan, in 1945, killing 23 U.S. airmen. They were buried among Shizuoka citizens who died in the bombing raid. The memorial, to be led by Dr. Hiroya Saguno, includes prayers for the dead, and whiskey will be poured from the canteen into the waters of Pearl Harbor as a peace offering.

The park service will also stream a private ceremony honoring 48 crewmembers who died on the USS Utah that will be recorded Sunday on Ford Island.

Other commemorations will take place on Oahu, including an annual observance at 10 a.m. Sunday to honor Marines and civilians who died on and near Ewa Mooring Mast Field west of Honolulu. The site has been nominated for the National Register of Historic Places.

The 25th Infantry Division and U.S. Army Garrison Hawaii will conduct a ceremony to commemorate the Army’s actions during the attack 3 p.m. Monday at Fort DeRussy in Waikiki. The ceremony, hosted by Maj. Gen. Charles A. Flynn, commander of the 25th Infantry Division, will include soldiers conducting a traditional Ha`a Warrior Dance, a 21-cannon salute and the laying of a wreath.