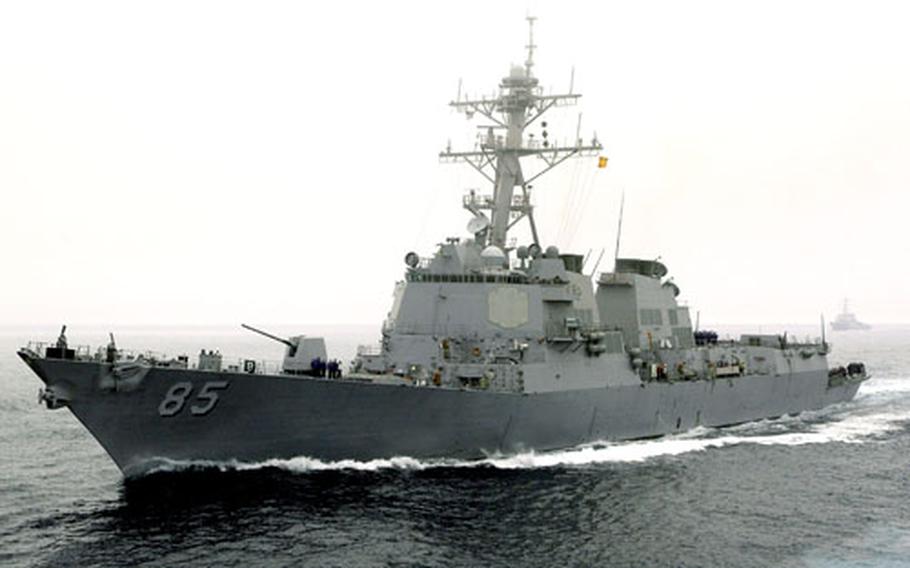 The guided-missile destroyer USS McCampbell is shown July 26, 2005 in the Pacific Ocean. The USS McCampbell collided with an oil tanker in the Persian Gulf off Iraq, slightly injuring four people, the Navy said Sunday. (U.S. Navy)

Four people were injured after the Navy guided-missile destroyer USS McCampbell collided Sunday night with a merchant ship in the Persian Gulf about 30 miles southeast of the Iraqi coast.

Two McCampbell sailors and two crewmembers from the Kiribati-flagged motor vessel Rokya I received minor injuries and were treated by the destroyer&#8217;s corpsmen.

Both ships received damaged to their bows, according to a Navy press release, but were still seaworthy. An investigation into the collision is under way.

McCampbell is in the northern Persian Gulf as part of Task Force 58, responsible for the security around the Iraqi al Basra and Khawr al Amaya oil terminals. The task force is made up of American, Australian, British and Iraqi personnel.

McCampbell is homeported in San Diego and is on a six-month deployment to the region.