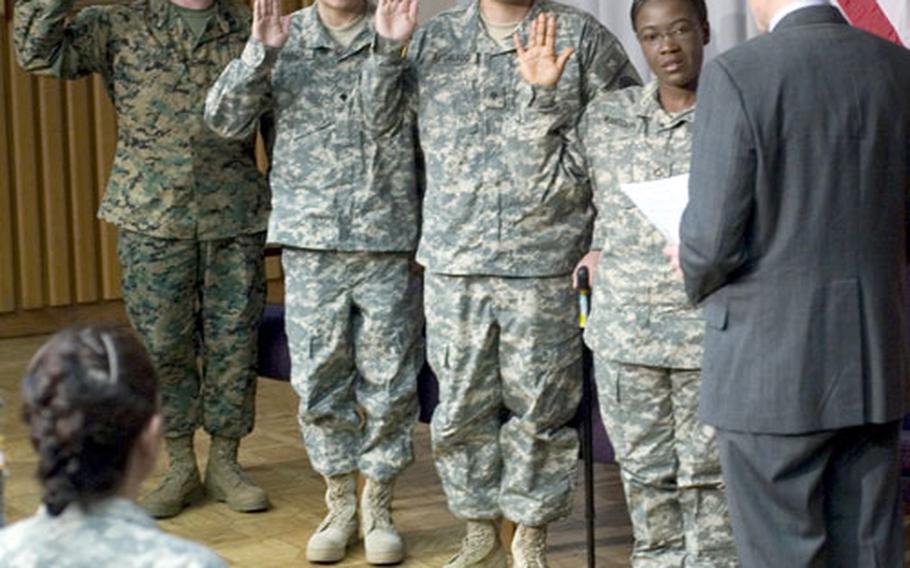 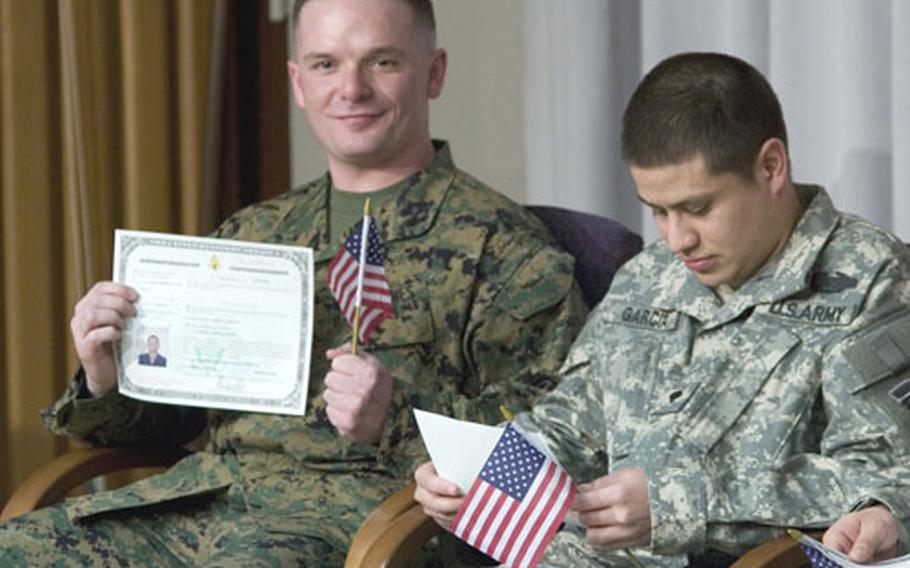 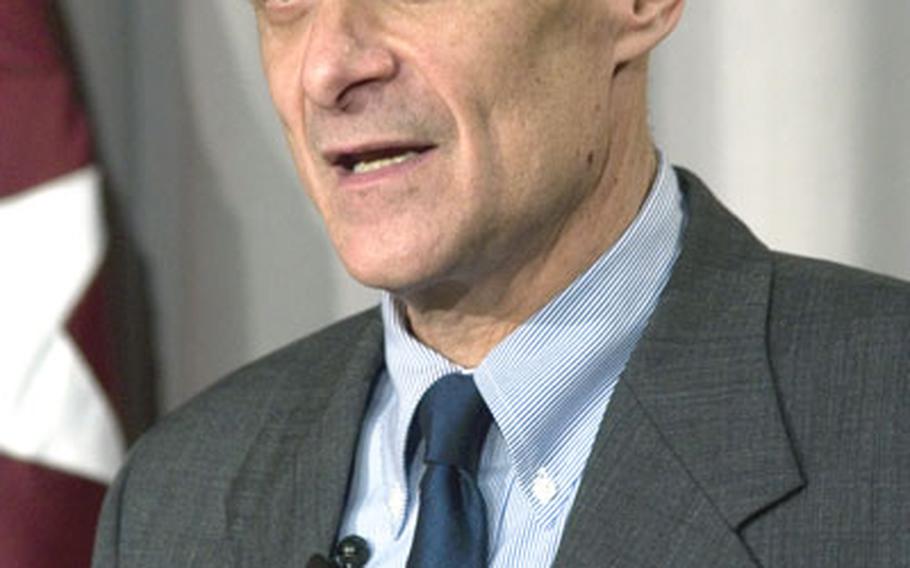 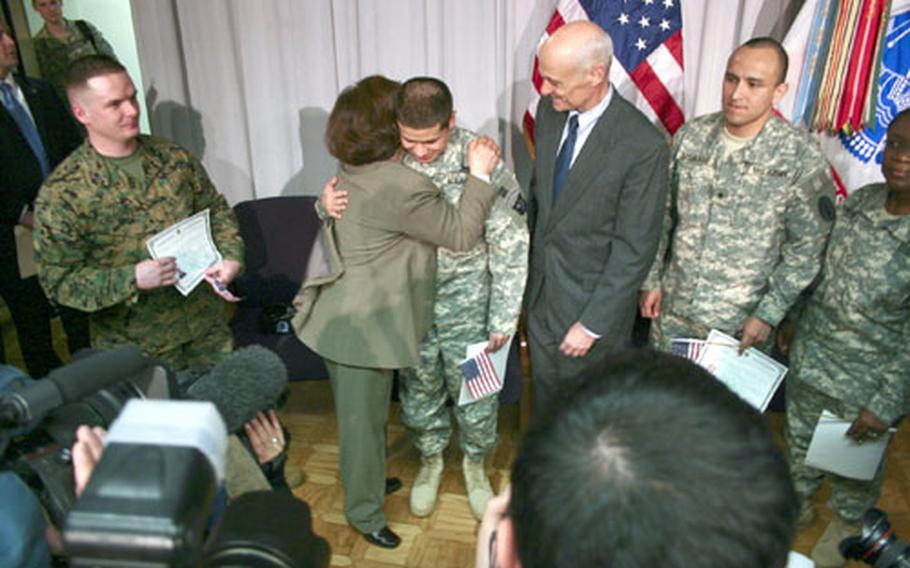 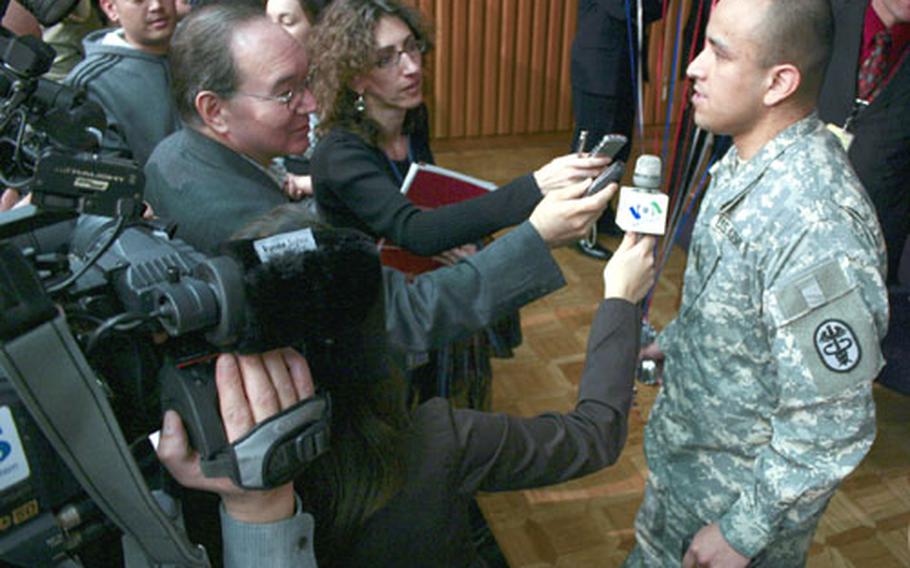 WASHINGTON &#8212; Marine Lance Cpl. Carlos Lopes waved a mini-American flag in his right hand and his citizenship paperwork in his left, happily showing off both to everyone who approached.

Lopes and three immigrant soldiers, all of whom were injured while serving in Iraq, became U.S. citizens on Monday, taking their final oath before a crowd of family and military officials at Walter Reed Army Medical Center.

The four were the latest group of foreign-born servicemembers to be naturalized under a 2002 executive order which allows expedited citizenship for immigrants willing to serve in the Armed Forces.

Under current law, foreign citizens who become permanent U.S. residents and sign up for active duty need only one year of service to qualify for citizenship. Without serving, foreign residents must wait five years.

But Lopes and the three soldiers said they all signed up for a combat tour overseas not because it would speed up their paperwork, but because they wanted to serve their adopted country.

&#8220;What I think is most beautiful about America is that I always felt like I belonged,&#8221; said Pvt. 1st Class Dwishnicka Randolph, a 26-year-old Haitian immigrant.

Randolph spent a year in Iraq before being evacuated to Walter Reed in March 2006 after being diagnosed with a facial bone tumor. Lopes served for four months in 2005 before suffering back and head injuries when a fellow Marine fell onto him from two stories above.

Walter Reed officials and Secretary of Homeland Security Michael Chertoff, on hand to administer the oath of citizenship, praised the courage and sacrifice of all four immigrants.

&#8220;Even before you took your oath today, you were fulfilling that promise every day on the battlefield in Iraq,&#8221; Chertoff said.

Since July 2002, more than 26,000 troops have become U.S. citizens that way, and immigration services officials estimate more than 40,000 others are eligible to apply.