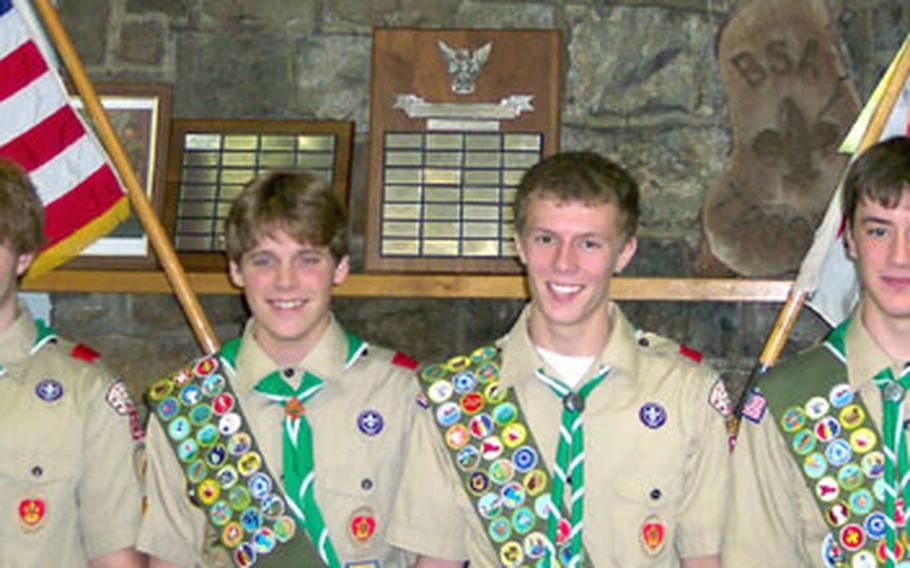 To become Eagles, Scouts must meet requirements in leadership, service and outdoor skills, and complete a community project.

The new Eagle Scouts, all students at Heidelberg High School at the time they earned their awards, are:

Daniel and Matthew Harvey, sons of Maj. Andrew and Denise Harvey. They join their brother, Stephen, and father as Eagle Scouts.For his project, Daniel Harvey, 16, cleaned, renovated and organized the storage room at the Heidelberg Teen Center on Patrick Henry Village. The project saved the Heidelberg community about $4,000.

Matthew Harvey, 17, renovated and improved security at the Heidelberg Child and Youth Services playgrounds on Patrick Henry Village. He repaired 10 sandboxes, the fence surrounding the CYS facility and all of the locks on the fence gates.

Joshua Hookness, 17, son of Maj. Bob and Wendy Hookness, restored a three-acre portion of the Heidelberg Historic Trail that leads from downtown to the K&#246;nigstuhl for his project. The work included clearing, tilling and reseeding the area, replacing six benches and repainting 300 meters of railing along the path.

He joins his grandfather, Ron Bass, and father as Eagle Scouts.

James Marple, 17, son of Col. Richard and Donna Marple, restored a section of the Heidelberg Historic Trail known as the Philosopherweg. The work included cleaning and clearing a quarter-mile stretch of the trail, replacing three sets of tables and benches and renovating a rest shelter.He joins his brother, 1st Lt. Eric Marple now with the 1st Cavalry Division, as an Eagle Scout.

Hookness and Marple will receive their awards Dec. 29 at the Patrick Henry Village chapel. The Harveys have returned to the States in preparation for their father&#8217;s deployment to Iraq and will received their awards in Missouri at a future date.