Four carriers to be in Pacific for exercises this summer 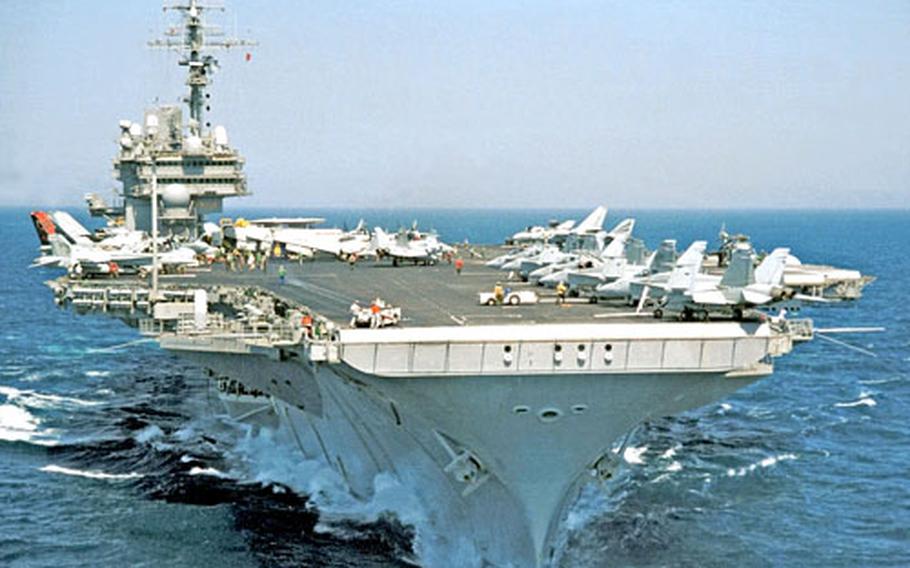 The USS Kitty Hawk, based in Yokosuka, Japan, is likely to be among four U.S. carriers participating in exercises in the Pacific this summer. (U.S. Navy)

ARLINGTON, Va. &#8212; The Navy plans to position four aircraft carriers in the Pacific for exercises this summer, one of which will likely include the USS Kitty Hawk, based at Yokosuka, Japan, Navy officials said.

The Kitty Hawk is the centerpiece of the Pacific Fleet, and as such, would participate in any major exercise there, according to Capt. Mike Brown, a spokesman for U.S. Pacific Fleet.

This summer would mark the largest U.S. carrier presence in the Pacific in 10 years, said Adm. Gary Roughead, commander of U.S. Pacific Fleet.

Roughead also said the guided missile cruiser USS Shiloh will be bringing some special weaponry to Japan when it replaces a similar ship there this year.

The Shiloh will replace one of the two Aegis cruisers currently based at Yokosuka, though PacFleet spokesman Jon Yoshishige could not say which.

The carriers would be deployed in various combinations in the Pacific over the summer months, Brown said Thursday.

One of the carriers involved in the August exercises would come from the Atlantic Fleet, said Brown, who declined to name the carrier.

The Navy did not have any further information Wednesday on what type of exercises or foreign militaries would be involved.

&#8220;A number of exercises are scheduled for this summer and are in the planning phase at this point. As more details become available, we will get them to you,&#8221; said Lt. Ryan Perry, a spokesman for U.S. Pacific Fleet.