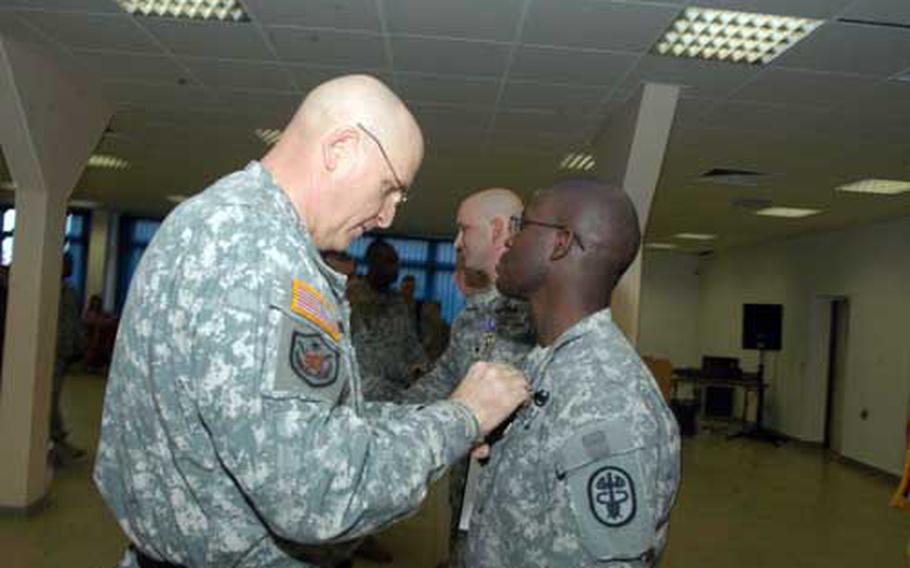 Lt. Gen. Kenneth Hunzeker pins a medal on Pfc. Derraivius Strawder at a ceremony held in Baumholder. Strawder was awarded the Army Commendation Medal with Valor for his actions in a firefight in Baghdad on June 23. (Seth Robson / S&S)

BAUMHOLDER, Germany &#8212; Pfc. Derraivius Strawder was part of a security detachment tasked with protecting a commander who was attending a council meeting just outside of Baghdad.

"The meeting had ended, but some still had questions for the commander," Strawder said. "When we walked out of the building, a gunman opened fire."

The June 23, 2008, meeting was part of a ceremony held for the opening of a park in al-Madaen, better known as Salman Pak. A former council member, though, had left early and grabbed his AK-47 assault rifle from his vehicle. He then waited for the commander and his soldiers to exit the building.

When they did, he sprayed the group with bullets, killing two soldiers.

Five of the soldiers were hit, including Strawder, when the gunman started reloading.

Bullets lodged in both his legs, Strawder turned and returned fire. Several other soldiers also shot at the attacker, killing him.

He was one of four Baumholder soldiers honored by V Corps&#8217; commander, Lt. Gen. Kenneth W. Hunzeker, at a ceremony Friday at the garrison. Spc. Tyler Latham, of the 40th Engineer Battalion, also received the Army Commendation Medal with "V" device, as well as a Combat Action Badge and Purple Heart. Purple Hearts also were awarded to Spc. Daniel Hausamann and Spc. Tanner D. Layton, both of the 1st Battalion, 6th Infantry Regiment.

Strawder, who was struck by bullets in his legs and groin, has spent the last several months recovering in a Warrior Transition Unit.

Still, Strawder shrugged away any talk of calling him a hero. Two soldiers were killed in the attack, including a friend of Strawder&#8217;s, Pfc. Brian Thomas.

When the bullets stopped, Strawder crawled to Thomas and performed what first aid he could.

"He was a real good friend," Strawder said. "I had to try and help him."