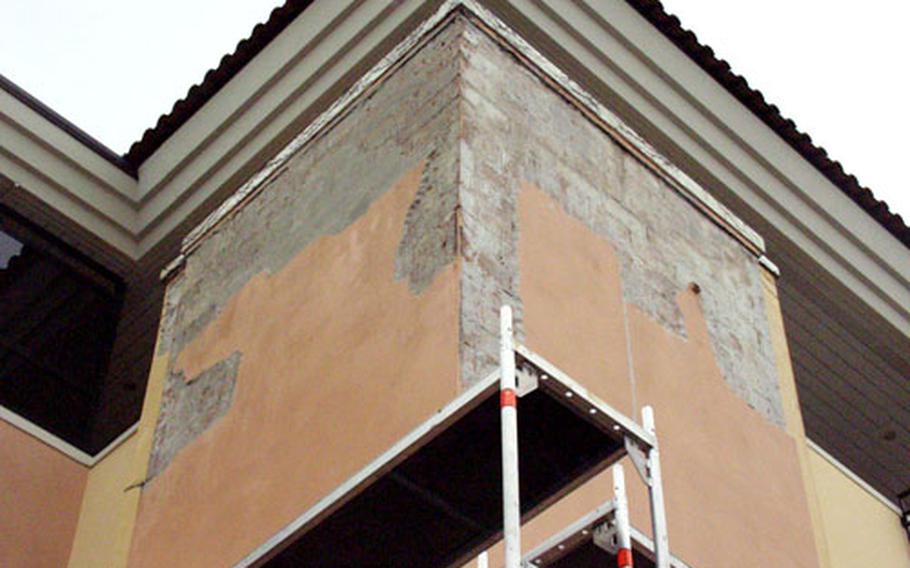 Scaffolding has been erected on four of the dormitories on the flight line at Aviano Air Base, Italy, in order to repair parts of the exterior where the plaster didn&#39;t bond correctly to the layers underneath it. (Kent Harris / S&S)

AVIANO AIR BASE, Italy &#8212; Four dormitories at Aviano are getting small face lifts to repair plaster that is falling off the exteriors of the buildings.

Regardless of the reason &#8212; weather, a bad mix of material, poor application or some combination &#8212; the problem looks worse than it is, Air Force officials say.

The oldest of the two-story structures, which each house about 100 airmen, opened in 2003. Problems haven&#8217;t been found in two similar dormitories nearby that opened later.

Cmdr. Stephen Revelas, the Navy&#8217;s resident officer in charge at Aviano, said the buildings are still structurally sound and don&#8217;t pose a danger to those living in them.

Since the problem was first spotted within the warranty period, the fixes are being made by the contractor without the Air Force footing the bill. However, officials have also decided to improve the cover over the stairwells at the same time, so they&#8217;re paying the contractor about $325,000 for that.

The plaster &#8220;bubbled&#8221; in some areas where it didn&#8217;t bond to the materials in the layers below, Polasek said. Most of the bad plaster has been chiseled off, leaving gray scars on the rust-colored pillars.

Revelas said crews should take about three weeks to put new plaster on, but weather conditions might change the timetable.

Weather is one factor that might have contributed to the problem in the first place. If it&#8217;s too cold or wet, plaster might not set properly.

Polasek said problems with buildings after they open are unfortunate, but not all that uncommon. There have been more than 100 projects in the Aviano 2000 program and related military construction on base in the past decade.

Other fixes to recently completed projects at Aviano include ongoing work to repair cracks in the South Ramp that opened in December and a regrading of the surface in front of the new post office to eliminate pooling water.