Foster Fest has a ‘Truckload of Fun’ lined up for Okinawa 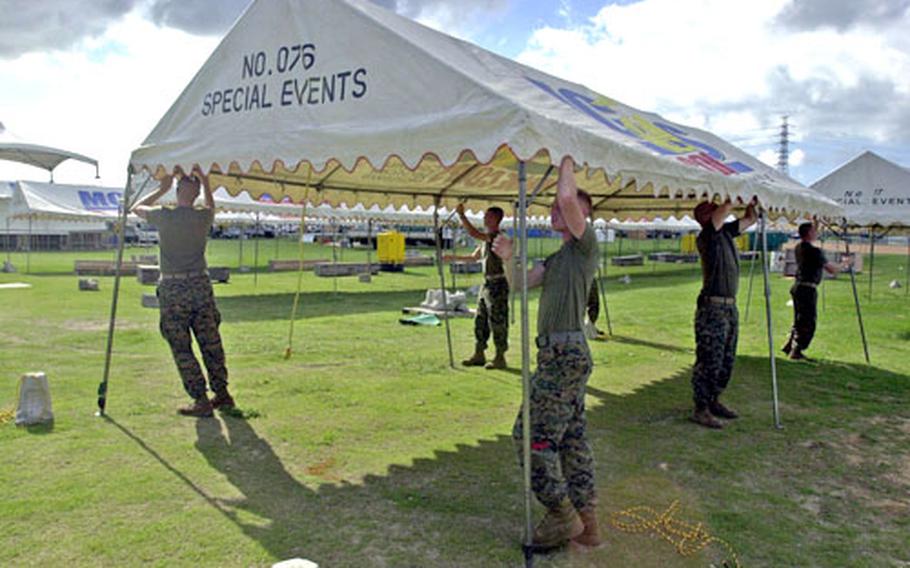 A working party of Marines raise one of many canopies on the Camp Foster parade field in preparation for this weekend’s Foster Fest. (Fred Zimmerman / S&S)

CAMP FOSTER, Okinawa &#8212; The gates here will open to all island residents this weekend for the camp&#8217;s annual fall festival.

Officials expect up to 40,000 people for the free Foster Fest, which features two days of games, food and live music, according to Vas Bora, of Marine Corps Community Services marketing. The festival is scheduled from 3 p.m. to midnight Saturday and 1 to 10 p.m. Sunday.

American Forces Network disc jockeys will kick off the festivities Saturday with a live remote from the event site at the parade field, Bora said. The DJs will host an annual contest in which the winner will drive home a &#8220;Truckload of Fun&#8221; &#8212; a 1996 Suzuki Escudo filled with prizes.

Ten AFN listeners have been chosen to compete and another five people will be selected at the festival, Bora said. All 15 finalists then are to compete in a &#8220;funky food contest&#8221; by eating such things as wasabi, fermented soybeans and raw squid.

&#8220;How far would you go for your best buddy?" is the theme of the contest. The winner wins the key to the truck and a prize, but a buddy the winner picks actually gets the vehicle.

The contest is open to servicemembers, their family and U.S. government employees 18 and older with a valid identification card and a driver&#8217;s license.

One other visitor will walk away with two round-trip airline tickets to Chicago or a seating class upgrade in a drawing Sunday evening, Bora said. An Epiphone guitar also will be given away each night during the &#8220;Viva las Divas&#8221; show.

Bora said while Kiddieland will offer children amusements such as the &#8220;Tiger Slide,&#8221; moon bounce and rock-climbing wall, parents can listen to one of the numerous live music acts to perform each day. Food and game booths also will be available.