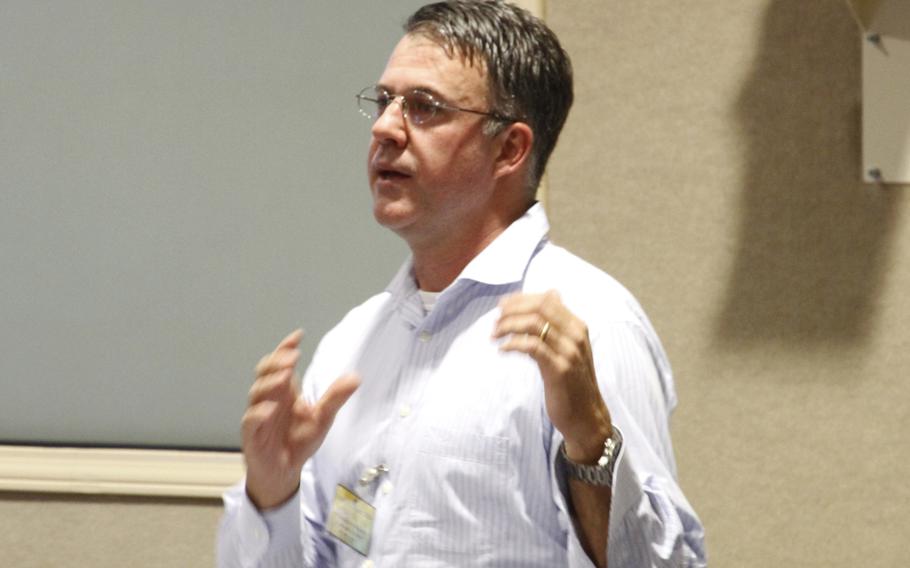 Eric Rosenbach, acting principal deputy assistant secretary of defense for global strategic affairs, explains the origins of Exercise Fortune Guard during an opening ceremony Aug. 4, 2014, at the Asia-Pacific Center for Security Studies in Honolulu. The one-week exercise is intended to help participants locate and seize weapons of mass destruction as they are being smuggled. (Wyatt Olson/Stars and Stripes)

FORT SHAFTER, Hawaii — To trace the origins of Fortune Guard, the new multilateral exercise that is focusing on interdiction of weapons of mass destruction, go back to December 2002.

Early that month, a Spanish ship intercepted the So San in the Arabian Sea. It carried no flag, and thus by international law, the Spaniards were within their rights to forcibly board it when the North Korean master of the craft refused to stop.

Below deck they found 15 fully assembled SCUD missiles, 15 conventional warheads and other material for building weapons bound for Yemen.

“Unfortunately, two days later, after hurried legal review and high-level consultations, the White House was forced to announce that the So San was being released and would continue on its way,” Eric Rosenbach, acting principal deputy assistant secretary of defense for global strategic affairs, said during Fortune Guard’s opening ceremony Monday in Honolulu. “While international law clearly provided for search, there were no provisions that allowed for seizure.”

From that interdiction shortcoming, President George W. Bush launched the Proliferation Security Initiative the following year, with the intent of building international cooperation to prevent trafficking of weapons of mass destruction. More than 100 nations have since signed on.

“In the new world that dawned after 9/11, mere inspection wasn’t good enough,” Adm. Harry Harris, Jr., commander of U.S. Pacific Fleet, said during the opening ceremony. “We needed a way to address these types of challenges and threats, to stop the flow of WMD, their delivery systems and related materiels.”

Fortune Guard is a maturation of the proliferation initiative, Rosenbach said during an interview with Stars and Stripes.

“After you build that strong foundation, then you can go to something that is stronger and more expansive,” he said. President Barack Obama has mandated the Defense Department to make the security initiative more “durable” without sacrificing its flexibility, he said.

PACOM is hosting the week-long exercise, which will include academic seminars and tabletop exercises, as well as operational training at port and sea Wednesday and Thursday, although officials are keeping an eye on Hurricane Iselle, which could reach Hawaii by Thursday.

Next year’s Fortune Guard will be hosted by New Zealand, followed by Singapore, Australia, Japan and South Korea.

“So with the commitment of those six nations to host something like this each year, this is the first time we’ve done an exercise like this,” Rosenbach said. “That in and of itself is very significant.”

Also notable is the fact that South Korea and Japan will be working side by side during the operational training. The strongest U.S. allies in the northern Pacific have an icy relationship from unresolved issues stemming from World War II and disputes over islands.

“We always look for opportunities where you can have key allies and partners work together, not just with us,” Rosenbach said. “In a case like this, there are mutual overlapping national interests, and they’ve decided on their own that it makes sense to cooperate.”

The five nations joining the U.S. were chosen to host because they’ve “played a strong leadership role” in the region, he said. Twenty-one countries are deemed “operational experts” among the PSI membership. The six countries participating in Fortune Guard are all in the Asia-Pacific region.

“They’re also the nations that have a very vested interest in this because they have a lot of commercial traffic.” Rosenbach said. “They’re in areas that are important when it comes to doing counter-proliferation work.”

Indeed, North Korea is a major offender in illicit arms trafficking. In recent weeks, it has fired missiles into the sea and threatened attacks on the U.S.

Harris noted some success stories already in preventing weapons smuggling as a result of PSI.

In summer 2011, the U.S. turned back a North Korean ship believed to be carrying missile technology to Myanmar.

Last year, a ship was stopped in the Panama Canal and found to be carrying two fighter jets and missiles under a load of sugar.

“The president of Panama tweeted a selfie to the world with that materiel in the background, a strong message to those who are thinking about smuggling WMD through the Panama Canal,” Harris said.