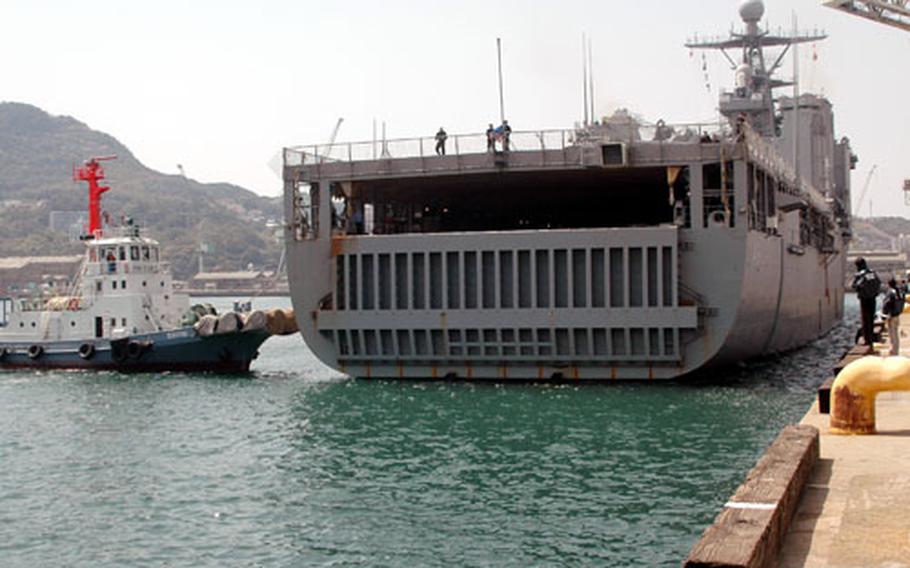 The USS Tortuga is gently eased by a harbor pilot’s tugboat into the India Basin pier at Sasebo Naval Base on Friday afternoon. (Greg Tyler / S&S)

The USS Tortuga is gently eased by a harbor pilot’s tugboat into the India Basin pier at Sasebo Naval Base on Friday afternoon. (Greg Tyler / S&S) 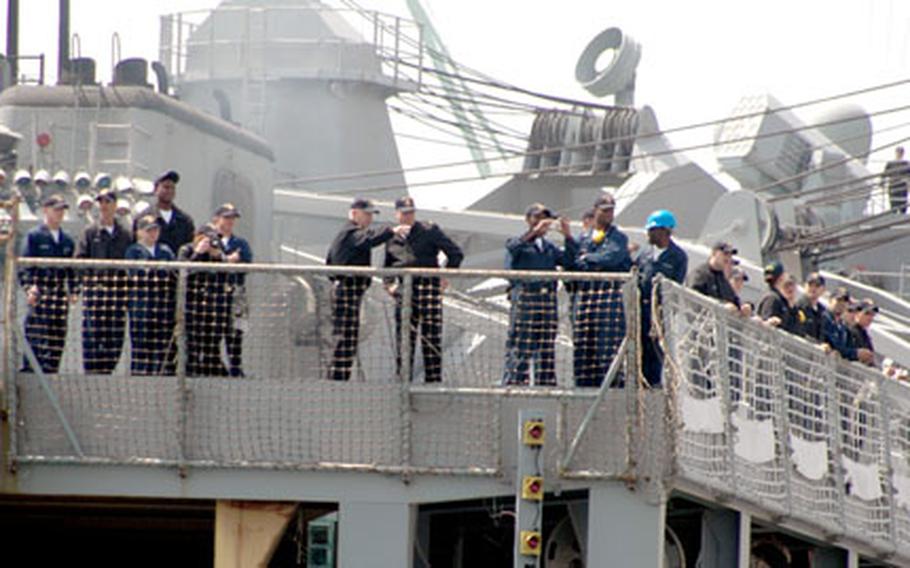 Sailors aboard the USS Tortuga get a first look at their ship’s new home as it eases into the India Basin pier at Sasebo Naval Base on Friday afternoon. (Greg Tyler / S&S)

Harbor pilots nudged Tortuga into the India Basin Pier in a stern-to-stern configuration with the Fort McHenry.

&#8220;That way they can use a crosswalk between the two ships when they begin the hull swap,&#8221; said Lt. Edward Sisk, spokesman for Command Task Force 76.

The Navy uses ship rotations or hull swaps to replace older ships operated by forward-deployed forces with newer or more capable ships. The Fort McHenry, operating from Sasebo since 1995, was commissioned in July 1987 and was the Navy&#8217;s third Whidbey Island-class dock-landing ship. Tortuga, commissioned in September 1990, was the sixth.

The Tortuga&#8217;s former homeport was Naval Amphibious Base Little Creek, Va. It will remain in Sasebo with the Fort McHenry crew. Tortuga will become part of the Forward Deployed Expeditionary Strike Group and Essex Amphibious Ready Group, Sisk said.

The Tortuga can carry and operate helicopters and various landing craft and serve as an amphibious forces sea base for extended periods, he said.

As a result, five personnel will be added to ACU-5 including one loadmaster and four maintenance technicians, Sisk said.

&#8220;The LCAC swap is a normal rotation to ensure the best maintained craft&#8221; are forward deployed, he said.

After the Tortuga-Fort McHenry swap, he added, the Fort McHenry will travel to its new homeport at Little Creek.