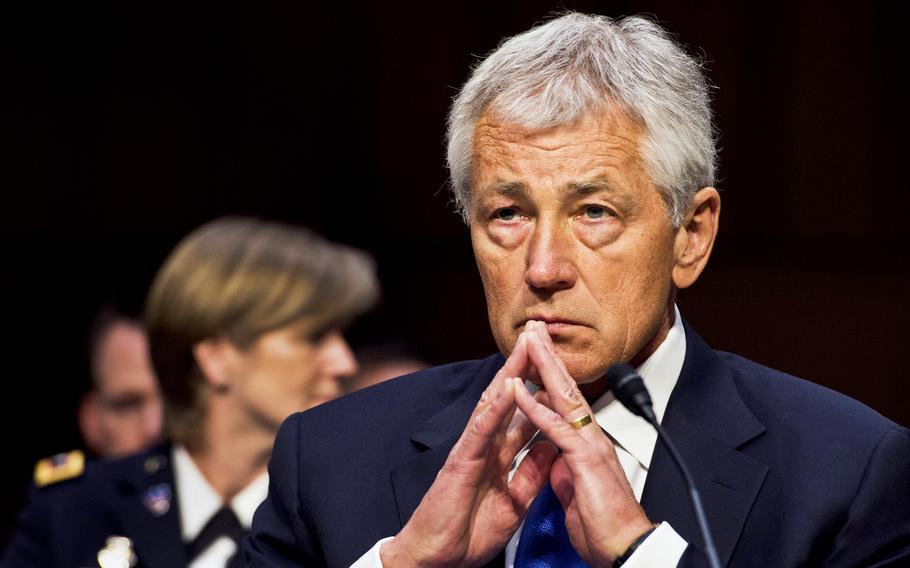 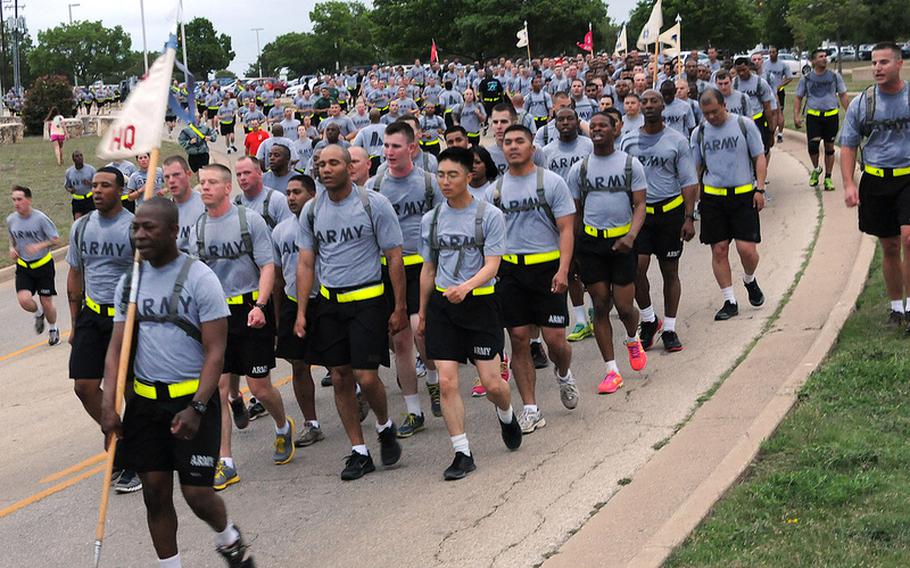 Thousands of servicemembers took part in the Fort Hood Sexual Harassment-Assault Response and Prevention 5km Run and Walk on April 23, 2013. An Army sergeant first class who had been a sexual assault prevention program coordinator at the Texas base is now under investigation for abusive sexual contact and acting as a pimp. (U.S. Army)

WASHINGTON – An Army sergeant first class who had been a sexual assault prevention program coordinator in Texas is now under investigation for abusive sexual contact and acting as a pimp, another blow to the Pentagon’s ongoing efforts to show that the military takes sexual assault seriously.

In response, Defense Secretary Chuck Hagel has directed the services to retrain, recredential and rescreen everyone who works with the sexual assault prevention and response programs, as well as all military recruiters.

Last week, the head of the Air Force’s sexual assault prevention program was arrested near the Pentagon and charged with sexual battery for allegedly groping a woman in a parking lot. Just days later, the Defense Department released its annual report on sexual assault, which showed a steep increase in the number of incidents.

The soldier under investigation at Fort Hood had been assigned as an equal opportunity adviser as well as the Sexual Harassment/Assault Response and Prevention (SHARP) program coordinator with one of the III Corps’ subordinate battalions, according to a Defense Department press release. The man was suspended immediately after his commander learned about the allegations of pandering – the legal term for pimping – as well as abusive sexual contact, assault and maltreatment of subordinates, according to the Army. No charges have been filed yet.

Hagel was frustrated, angry and disappointed “over these troubling allegations and the breakdown in discipline and standards they imply,” DOD spokesman George Little said.

“We have to take action and we have to take action swiftly,” Little told reporters Wednesday. “This is a top priority for this secretary of defense, and he realizes that change may not be able to occur overnight, and we’re clear-eyed about that. But he’s not going to stop fighting this problem.”

Hagel met with President Barack Obama on Tuesday for a regularly scheduled meeting, and the two did discuss the sexual assault issue during that meeting, Little said. Both expect quick action on the retraining, rescreening and recertification, he said.

The DOD works with an outside group to train sexual assault prevention personnel, and that group has trained about 3,000 people since October, Little said. The department also is examining whether training, screening and certification processes need to be updated. “The intent is to ensure we have the right people with the right backgrounds performing this very important responsibility,” Little said.

Members of Congress were flabbergasted and outraged when they heard of the new accusations.

Sen. Claire McCaskill, D-Mo., said that if the allegations are proven true, it is time to re-evaluate how the military assigns people to sexual assault response-related positions.

“Are folks filling these jobs who aren’t succeeding elsewhere? Or are these jobs being given to our best leaders?” she asked in a written statement.

Wednesday, McCaskill and Sen. Amy Klobuchar, D-Minn., introduced a new bill that would require Hagel to review how people responsible for sexual assault prevention and response within the military are trained as well as the qualifications and experience required, as well as take action against any who are deemed to lack the proper training, qualifications or experience.

Rep. Howard P. “Buck” McKeon, the California Republican who is chairman of the House Armed Services Committee, said the allegations at Ft. Hood are “the latest chapter in a long, sordid history of sexual abuse in our Armed Forces.

“I see no meaningful distinction between complacency or complicity in the military’s latest failure to uphold their own standards of conduct. Nor do I see a distinction between the servicemember who orchestrated this offense and the chain of command that was either oblivious to or tolerant of criminal behavior. Both are accountable for this appalling breach of trust with their subordinates and their failure to act worthy of their responsibilities as leaders,” he said.

“Twice now, in a matter of as many weeks, we’ve seen the very people charged with protecting victims of sexual assault being charged as perpetrators,” Murray said. “It’s an astonishing reminder that the Pentagon has both a major problem on its hands and a tremendous amount of work to do to assure victims – who already only report a small fraction of sexual assaults – that they are changing the culture around these heinous crimes.”

Sen. Kirsten Gillibrand, the New York Democrat who slammed the Air Force brass during a hearing last week for its record on sexual assault, said calling the Fort Hood allegations disturbing “would be a gross understatement.”

Gillibrand, like several other members of Congress, said the incident highlighted the need for change.

“It is time to get serious and get to work reforming the military justice system that clearly isn’t working,” she said.

Hagel is “open to all options” to stop sexual assault, Little said, and “he wants to work closely with the United States Congress to see what ideas they have to address this problem, he wants to work with this independent panel that was recently named, he wants to work inside the department at all levels.”

“This is a leadership issue,” Little said, “Not just for the secretary of defense and the service secretaries and the service chiefs, but it’s also for the base commanders and company captains and others. It’s that kind of leadership that is required.”

Sen. Dick Durbin, the Illinois Democrat who chairs the Senate Appropriations Defense Subcommittee, said the Army’s leaders should expect some tough questions about the incident when they appear before his committee next week.

“Reports of widespread sexual assaults in the armed services show a disgraceful culture of abuse that must be stopped,” he said.