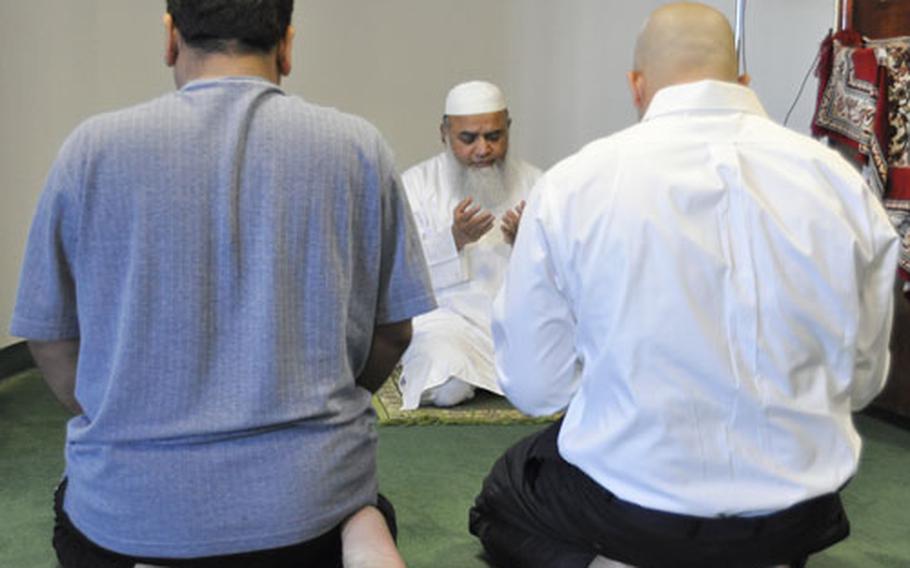 Imam Syed Amed Ali leads prayers Friday afternoon at the Islamic Community Center of Greater Killeen, Texas. Ali was interviewed about Maj. Nidal Malik Hasan by the FBI. He said Hasan came to prayers every morning. The mosque called the shootings a "cowardly attack" that no "religious ideology could ever justify or excuse." (Megan McCloskey / Stripes)

Imam Syed Amed Ali leads prayers Friday afternoon at the Islamic Community Center of Greater Killeen, Texas. Ali was interviewed about Maj. Nidal Malik Hasan by the FBI. He said Hasan came to prayers every morning. The mosque called the shootings a "cowardly attack" that no "religious ideology could ever justify or excuse." (Megan McCloskey / Stripes) 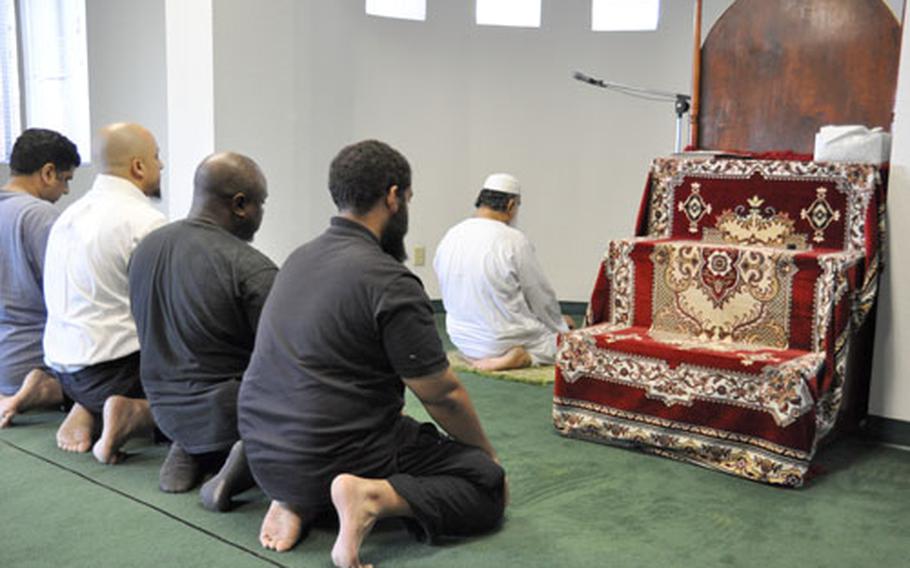 WASHINGTON &#8212; Some said he was an outspoken Muslim, prone to emotional outbursts, angry about the U.S. war in Iraq and dreading an impending deployment to Afghanistan.

Others who knew him recalled Maj. Nidal Malik Hasan as a dedicated Army psychiatrist trained to help fellow soldiers cope with the psychological wounds of combat.

And a few noted that while Hasan never exhibited a violent side, they weren&#8217;t particularly surprised to learn he allegedly was at the center of the worst mass murder ever committed on an American military base.

Now the 39-year-old Muslim-American, who authorities say killed 13 people and wounded 38 others in Thursday&#8217;s rampage at Fort Hood in Texas, is at the center of a riddle investigators have only begun to probe: How could a military psychiatrist, surrounded by other mental health experts sensitized to signs of combat stress, suddenly snap without any apparent warning?

As Hasan lay in a coma in a Texas hospital after being shot by base police responding to Thursday&#8217;s attack, investigators fanned out across the country Friday in search of a motive or explanation for the killings.

Hasan grew up in Virginia and spent years in the Washington, D.C., area on military assignments, before being transferred to Darnall Army Medical Center at Fort Hood in August, officials said.

Dr. Val Finnell, a classmate of Hasan&#8217;s last year at the Uniformed Services University of the Health Sciences in Maryland, called Hasan &#8220;a vociferous opponent to U.S. policy in Iraq&#8221; and said he frequently spoke about his faith, sometimes in inappropriate venues.

Following the shootings, Hasan&#8217;s family told The Washington Post that he had endured name-calling and harassment about his Muslim faith during his 12-year Army career, and was upset about an imminent deployment to Afghanistan.

But Finnell said Hasan was usually the instigator of arguments, speaking openly about the injustices of U.S. military missions overseas and sulking when others challenged his remarks.

Another Army officer who worked with Hasan at Walter Reed Army Medical Center said Hasan was &#8220;generally polite&#8221; with staff but problematic with his patients. On several occasions, he said, Hasan condemned his patients struggling with drug or alcohol addiction for &#8220;unholy&#8221; behavior, and openly tried to convert others to Islam.

&#8220;When I heard that he was behind the shootings, frankly it didn&#8217;t seem like much of a stretch,&#8221; said the soldier, who asked to remain anonymous because Army commanders instructed him not to speak about Hasan.

Fort Hood officials said Hasan used a pair of handguns in the attack, which took place at the Texas base&#8217;s Soldier Family Readiness Center. Most of the injured were soldiers at the facility for pre- and post-deployment medical checkups.

Hasan served six years at Walter Reed before his Texas assignment. As a clinical psychiatrist, he worked with both wounded troops returning from war and their families. He also served as a fellow for disaster and preventive psychiatry at the military&#8217;s Center for Traumatic Stress, official records show.

Hasan has never been deployed to Iraq or Afghanistan, but Army officials confirmed he was due to be sent to Afghanistan later this year.

Dr. Asif Qadri, head of the medical clinic at the Muslim Community Center in Silver Spring, Md., said Hasan frequently attended prayer services there. He spoke with pride about being a Muslim serving in the Army, Qadri said, and was known as a &#8220;jovial&#8221; and &#8220;well balanced&#8221; person who never talked about politics.

On Friday for about 45 minutes, the FBI interviewed the imam of the local Killeen, Texas, mosque that Hasan attended. Seyed Amed Ali doesn&#39;t speak much English, but he said the president of the Islamic Community Center of Greater Killeen translated for the FBI.

Ali said Hasan prayed every morning, normally wearing his uniform. Hasan told the imam he planned to visit his parents in Virginia for two weeks prior to deploying to Afghanistan for a six-month tour. Records show, however, that Hasan&#39;s parents are deceased.

Just last week, Hasan expressed views that Muslims shouldn&#39;t serve in the military and fight other Muslims, according to Duane Reasoner Jr., a recent Muslim convert who had been having dinner regularly with Hasan.

Hasan had taken 18-year-old Reasoner under his wing, mentoring him in his new faith. After evening prayers he would often buy a fish dinner for Reasoner and sometimes the iman at the Golden Corral, a chain buffet restaurant. Besides mentioning that he prayed for a wife, the conversation almost never strayed from religion, Reasoner said, describing Hasan as warm and caring.

Manager Vera Brooks said Hasan, dressed in typical civilian clothes, was a regular there, eating by himself almost every weekend.

The night before the shootings, Hasan and Reasoner went as usual to the Golden Corral. Reasoner said Hasan acted as he always did. No red flags.

"Nothing was out of the ordinary," he said.

Neighbors in Hasan&#8217;s former apartment complex in Silver Spring said they had only superficial relationships with him. Malcolm Frazier said he had brief conversations with Hasan in the apartment hallway, and that Hasan usually wore traditional Muslim dress in his civilian time.

But he described the Army major as a quiet man who was always alone.

That posting, on the Web site scribd.com, was written by someone using the name &#8220;NidalHasan&#8221; who compared Muslim suicide bombers to U.S. soldiers who&#8217;ve thrown themselves onto grenades to save their fellow soldiers.

The large number of victims and witnesses in the attack &#8212; about 300 soldiers and 100 civilians were interviewed on Thursday alone &#8212; led to confusion and chaos in the aftermath of the tragedy.

The base was locked down almost immediately following the attack, trapping students in schools and parents outside Fort Hood&#8217;s main gate. At one point, investigators believed as many as three other shooters may have been involved, and later base officials had to correct a report that Hasan had been killed in the attack. On Friday, they emphasized that Hasan is believed to be the only shooter involved.

At Fort Hood on Friday, soldiers who had already suffered psychological trauma fighting in Iraq and Afghanistan suddenly found themselves struggling to cope with a fresh disaster.

Sgt. Howard Appleby, a 31-year-old combat engineer suffering from PTSD as a result of two deployments to Iraq, was at the base hospital Thursday when the victims of the shooting started pouring in.

For 45 minutes, Appleby helped pull the wounded from ambulances and private cars, crying the whole time.