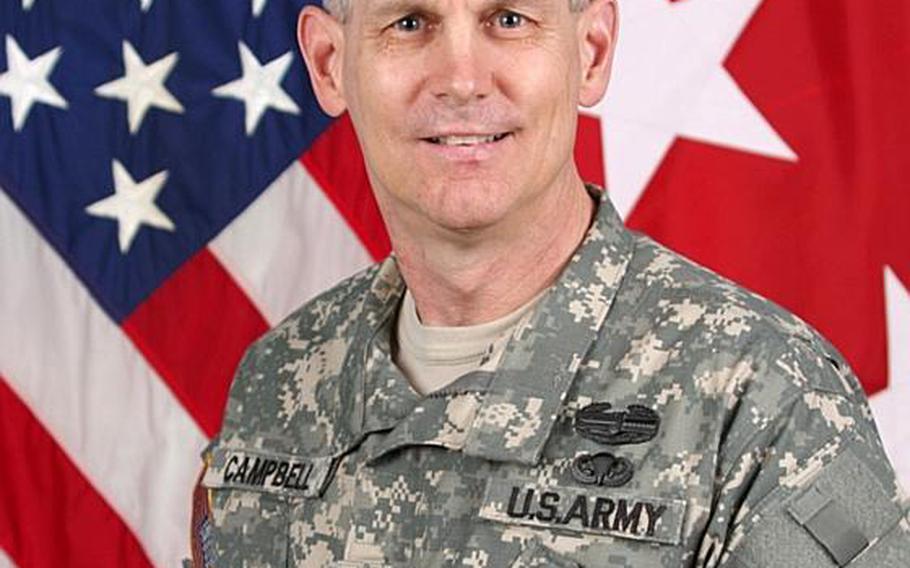 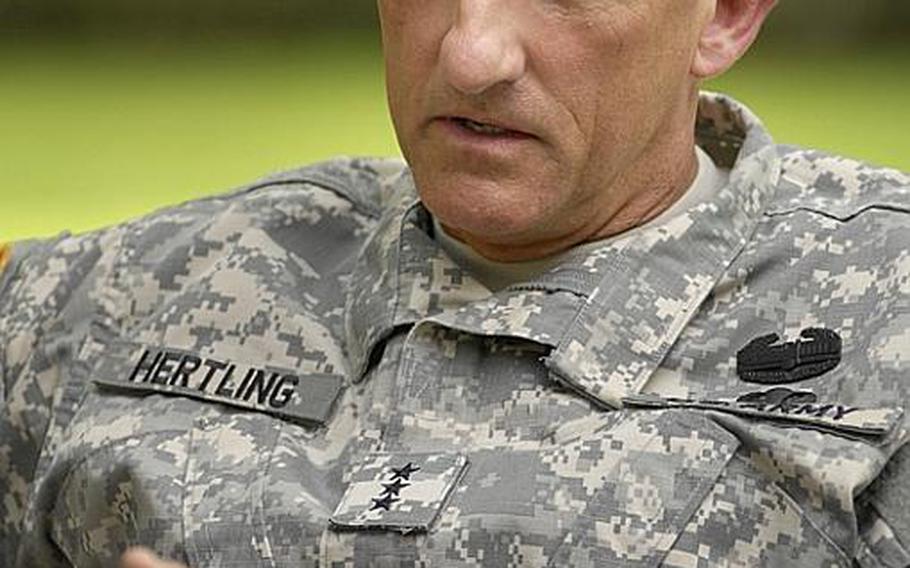 Clarification: A story published June 30 about Lt. Gen. Donald Campbell Jr., the man nominated to be the next commander of U.S. Army Europe, implied that the USAREUR post was a lesser position than Campbell's current job as III Corps commander. In fact, USAREUR has troops in 17 nations, and as head of the Army service component of U.S. European Command, the USAREUR commander interacts with militaries and political leaders in 51 countries.

STUTTGART, Germany &mdash; The man tapped to be the new commander of U.S. Army Europe, Lt. Gen. Donald M. Campbell Jr., if confirmed, will oversee the continuation of a post-Cold War downsizing that will consolidate soldiers at seven military communities by 2015.

Campbell&rsquo;s nomination comes at a time of great change for USAREUR, which has steadily shrunk since the end of the Cold War. USAREUR is poised to inactivate two of Europe&rsquo;s four Army brigades, starting later this year with the 170th Infantry Brigade in Baumholder, a small garrison town that has hosted an Army brigade for more than half a century.

USAREUR also is preparing to move its headquarters from Heidelberg to Wiesbaden, a move expected to be completed by the fall of 2013.

"LTG Hertling knows LTG Campbell from a number of previous assignments serving together, and believes this is an excellent nomination by the President," Col. Rumi Nielson-Green, USAREUR spokeswoman said in a statement Friday. "LTG Hertling is currently declining to talk about his plans for the future, as he feels there is much more to do in the service of the Soldiers and families of USAREUR prior to the anticipated fall change of command date."

Hertling, who took command of USAREUR in March 2011, has overseen much of the planning for those changes. He also was the first three-star general to command USAREUR since the 1950s. It was a change prompted by a reduced troop presence in Europe and a reflection of the need to save resources.

During a June 14 celebration of the Army&rsquo;s 237th birthday, Hertling spoke about some of those changes during a ceremony in Wiesbaden.

&ldquo;USAREUR has become an organization which is all muscle, no fat, and we partner with our European allies to build forces that fight above our weight class,&rdquo; he said. &ldquo;We do that through training, exercises, exchanges and by building trust.&rdquo;

Campbell, who has commanded troops in Iraq and units across the United States, also has spent some time in Europe.

&ldquo;The Army has asked me to command in Europe, and if confirmed by Congress, I will go with open arms and continue to serve to the best of my ability,&rdquo; Campbell said in a statement posted on Fort Hood&rsquo;s website.

If confirmed, Campbell will inherit a different USAREUR than the one he served during the 1980s.

From more than 200,000 soldiers at the end of the Cold War, USAREUR plans to have about 30,000 soldiers by 2015. While soldiers used to be fanned out across hundreds of facilities in the 1980s, they&rsquo;ll be stationed at seven remaining communities by 2015.

Campbell, who was commissioned as an armor officer in May 1978, was assigned to Army units in Bad Kreuznach and Mainz, Germany, during the mid-80s. Those units have since disbanded.

Campbell took command of III Corps in April 2011 after two years as head of the U.S. Army Recruiting Command.

While a move from corps command to the helm of USAREUR is technically a step up, the new assignment would have Campbell oversee far fewer troops than he does in his current seat at Fort Hood. More American soldiers &mdash; about 41,000 &mdash; are assigned to that one base than are assigned to all of Europe &mdash; roughly 40,000 &mdash; according to information posted on websites for USAREUR and Fort Hood.

As III Corps commander, four full Army combat divisions and almost a dozen other brigade-size combat and support elements at installations in Texas, Colorado and Kansas fall under Campbell&rsquo;s purview.

USAREUR, by contrast, has four combat brigades, a combat aviation brigade and various support units and activities, a large portion of which is slated to return to the U.S. or inactivate in the near future.