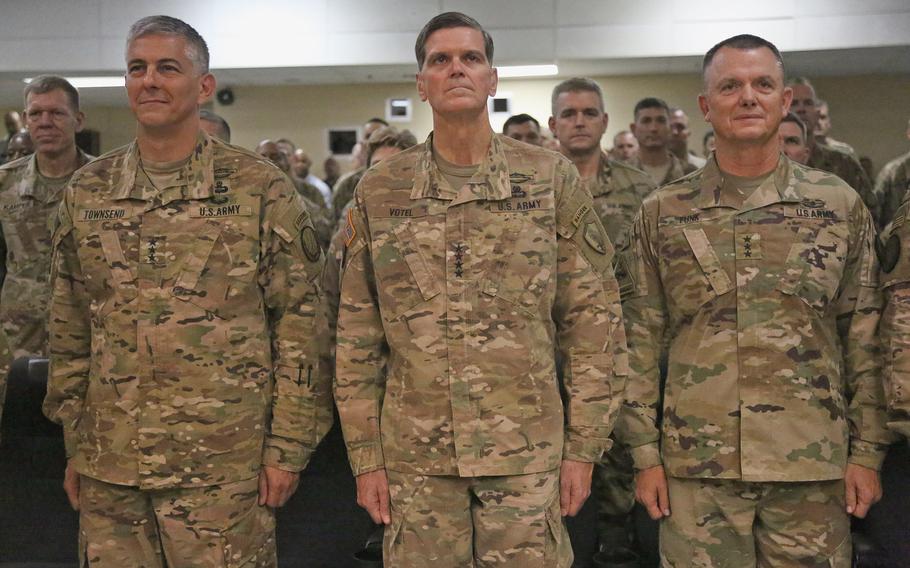 IRBIL, Iraq — Lt. Gen. Paul E. Funk II, commander of III Armored Corps, assumed command Tuesday of the U.S.-led coalition backing Iraqi and Syrian forces in their fight against Islamic State at a time when the terrorist group continues to lose ground in both countries.

Funk, commander of the Fort Hood, Texas-based III Armored Corps, is on his second deployment in support of Operation Inherent Resolve — his sixth combat deployment since Operation Desert Shield and Desert Storm.

He takes command as Iraqi forces are soon expected to begin an offensive to retake the ISIS-held town of Hawija, south of Kirkuk, and half of Shirqat. The group also still controls towns in western Anbar province near the Syrian border and swaths of territory in Syria.

Under Townsend, the coalition helped Iraqi Security Forces reduce ISIS-held territory to a tenth of what it once was. The Iraqis liberated Mosul, the country’s second-largest city and a key stronghold for the militants, as well as Tal Afar to the west and the remainder of northern Nineveh province.

He’s also overseen coalition training and support of Syrian opposition groups fighting to oust ISIS from the capital of its self-proclaimed global caliphate in Raqqa, where the old city was liberated earlier this week.

“What all of this has shown is that our ‘by, with and through’ strategy works when you have capable partners willing to fight,” Townsend said.

Townsend’s XVIII Corps had relieved III Corps when it was last in Iraq from September 2015 to August 2016, then under the command of Lt. Gen. Sean B. MacFarland.

Since its inception in June 2014, the coalition of 72 nations and organizations has helped its Iraqi and Syrian partners reclaim more than 30,000 square miles of territory from ISIS and liberate more than 5.5 million people, the coalition said.

Besides intelligence, combat advice and more than 26,000 strikes, the alliance has provided equipment and training for nearly 115,000 Iraqi Security Forces members and more than 11,000 Syrian fighters.

As a result, “real change is happening,” Funk said. “ISIS is on the run.”

Condemning the jihadis’ campaign of violence, Funk reaffirmed the coalition’s commitment to ending it.

“ISIS’ brutality forces us to look deep into the heart of darkness,” he said. “We must defeat them, and our collective effort will.”