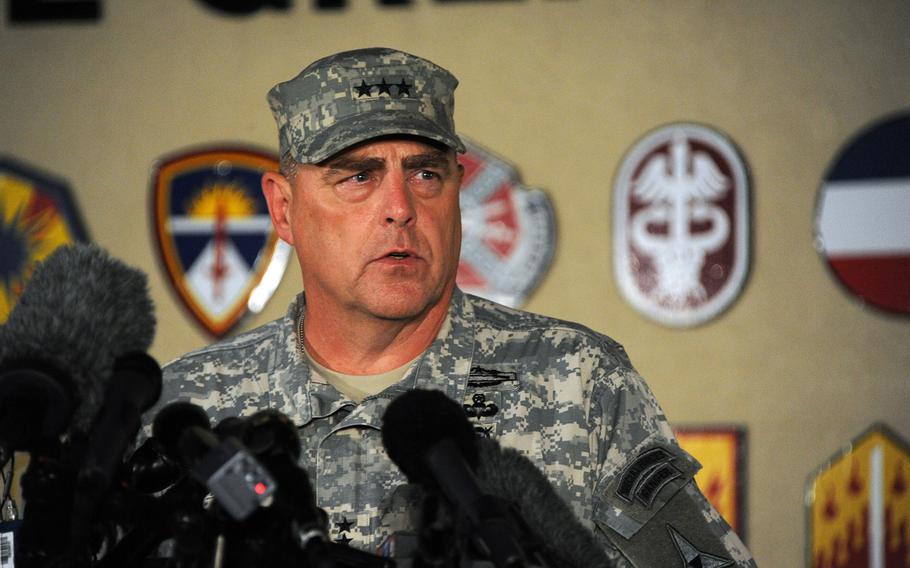 WASHINGTON — An argument between the shooter and other soldiers at Fort Hood appears to have occurred shortly before Spc. Ivan Antonio Lopez opened fire with a semi-automatic pistol at the installation Wednesday, killing three and wounding 16 servicemembers before killing himself when confronted by law enforcement.

“It was mentioned yesterday there may have been a verbal altercation with another soldier or soldiers, and there’s a strong possibility that that in fact immediately preceded the shooting,” Lt. Gen. Mark Milley, the commander of III Corps, told reporters at a press conference Thursday. “We do not have that definitively at this point, but we do have strong indications of that.”

Milley said, however, that there are no indications at this point that Lopez was trying to kill specific individuals as he continued shooting.

Investigators are looking into Lopez’s finances, medical situation, personal relationships and family situation to try to determine what might have contributed to or precipitated the killings, the general noted.

Milley said there are no indications that Lopez had any ties to terrorist groups, although nothing is being ruled out at this point.

Regardless of what triggered the shooting, Lopez’s mental health problems were likely the ultimate cause of the rampage, officials say.

“We have very strong evidence that he had a medical history that indicates an unstable psychiatric or psychological condition. We’re going through all the records to ensure that is in fact correct, but we believe that to be the fundamental underlying causal factor,” Milley said.

Lopez was undergoing mental health treatment for depression, anxiety, and sleep disturbances and had been prescribed a number of drugs, including Ambien, Army Secretary John McHugh told lawmakers during a scheduled hearing on budget matters before the Senate Armed Services committee Thursday.

McHugh said Lopez had been fully examined by a psychiatrist last month.

“We had no indication on the record of that examination that there was any sign of likely violence, either to himself or to others, [and] no suicidal ideation,” he said. “So the plan forward was just to continue to monitor and to treat him as deemed appropriate.”

Lopez served as in infantryman in Iraq from August to December 2011. At the time he was assigned to the 6th Infantry Regiment, 1st Armored Division, which is based at Fort Bliss, Texas.

Milley said Lopez’s tour in Iraq was not cut short, and he left the country with the rest of his unit after their mission was completed. All U.S. troops were required to leave Iraq by the end of 2011 under the terms of an agreement between the American and Iraqi governments.

Lopez changed his military occupational specialty before transferring to Fort Hood in February. He was a vehicle operator in the 49th Movement Control Battalion, 13th Sustainment Command at Fort Hood at the time of the shooting, according to the Army.

Milley provided an update on the conditions of the 16 wounded soldiers who were being treated at the Carl R. Darnall Medical Center on post, or the Scott and White Memorial Hospital in nearby Temple, Texas. Currently, nine are at Scott and White, three are at Darnall, and four have been released, according to Milley.

Base officials are planning a memorial ceremony early next week to honor the fallen, Milley said.