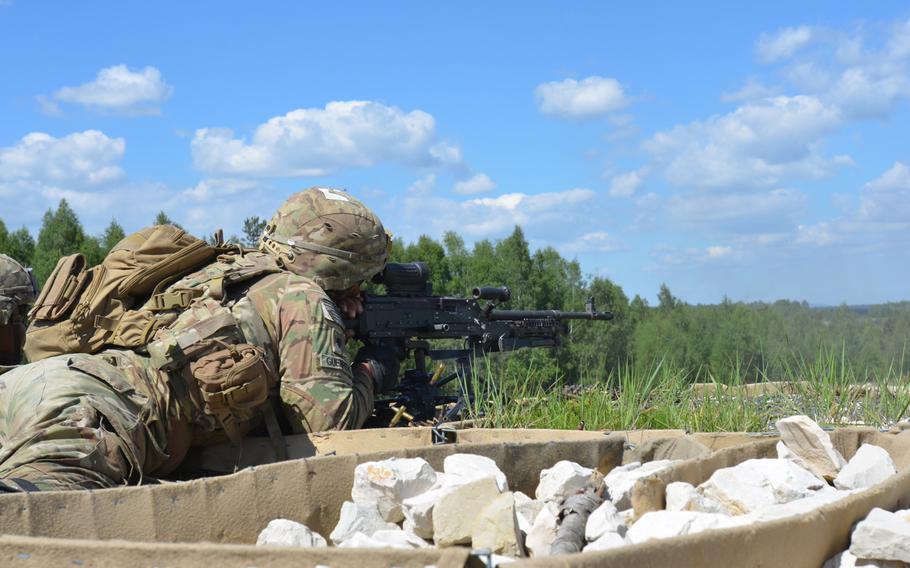 A soldier with 2nd Battalion, 12th Infantry Regiment, fires during a live-fire exercise at Grafewoehr Training Area, Germany, May 26, 2017. The exercise followed an Emergency Deployment Readiness Exercise in which the battalion deployed from Fort Carson, Colo., to Europe within two weeks. (Nicholas Vidro/U.S. Army)

WIESBADEN, Germany — A Fort Carson infantry battalion was thrust into a hectic six-week schedule with an alert on May 1 that the unit’s more than 600 soldiers needed to be in the air and on their way to Europe within 14 days.

There was no real-world emergency, but the short timeline was a way to test the battalion’s ability to rapidly deploy should one arise, in what is known as an Emergency Deployment Readiness Exercise. The compressed timeline forced the battalion’s leadership to think fast.

“To get a battalion out on this timeline, it requires a total team effort,” Lt. Col. Kirby Dennis, commander of 2nd Battalion, 12th Infantry Regiment. “It was very neat to see all the different entities coming together to make sure we were successful, and I think that’s manifested itself in a fantastic deployment and fantastic training.”

Now, the battalion is in Grafenwoehr, Germany, where they have wrapped up a week of vehicle live-fire qualification. Additionally, the battalion was able to fire 10 anti-tank missiles on the range as well as conduct a large-scale air assault exercise in nearby Hohenfels with the 10th Combat Aviation Brigade.

The pace of the training was relentless, Dennis said, but his soldiers welcomed it.

“It was the right kind of challenge because it forced our leaders and our soldiers to commit to what they were doing for 24 hours a day for a whole week,” he said. “They’re better trained as a result of that.”

The decision to have the battalion train in Bavaria immediately after the completion of their deployment exercise was made early in the process.

“You don’t just deploy somebody someplace and then turn around and send them right back because it’s a waste of money and not a good use of training resources,” USAREUR planner Lt. Col. Robert Guenther told Stars and Stripes in May.

The battalion’s arrival and movement to the region was also a test of another relatively new initiative. Rather than bring their own vehicles from Fort Carson, which would have taken too much time and resources, the battalion used equipment from the Army’s prepositioned stocks around Europe. These were shipped by rail to Grafenwoehr in anticipation of their arrival.

With its initial live-fire exercises complete, Dennis’ battalion is looking ahead to a summer of Expert Infantry Badge qualification and company-level training before heading to the Joint Readiness Training Center in November.

“We have learned a ton, we’re a much better organization coming out of this,” Dennis said. “We’re more than ready for the next phase of our training cycle.”