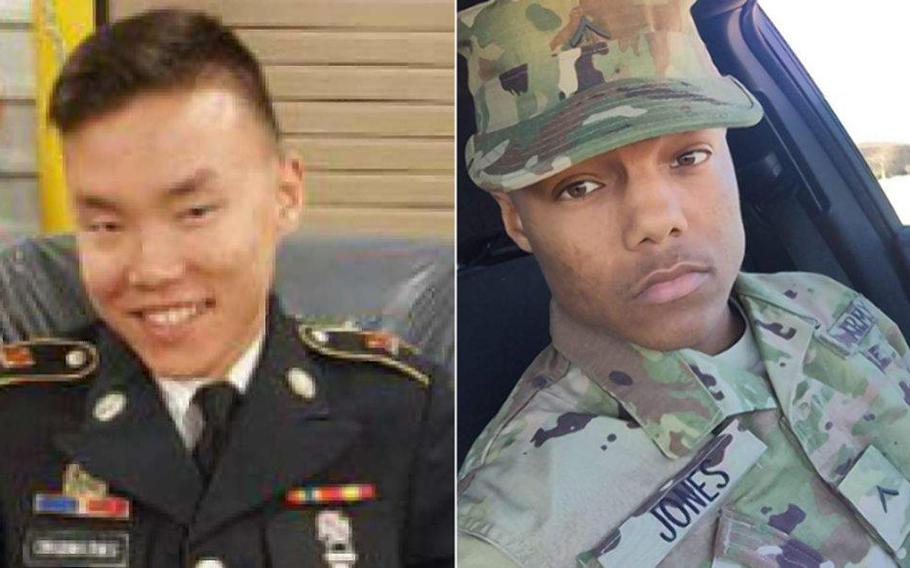 SAN ANTONIO — Two soldiers who went missing in December from their post at Fort Bliss were apprehended and returned to duty in late January and February, the Army said Wednesday, ending a bizarre double AWOL incident.

The soldiers were last seen together Dec. 19 in a car owned by Jones, Stars and Stripes reported in January. Obad-Mathis was reported AWOL when he failed to show up for duty the next day, while Jones, who was on leave, was not considered AWOL until Jan. 3.

Army officials cooperated with law enforcement agencies to find and apprehend the solders, the official said, adding that the incident is under investigation.

Army officials did not immediately respond to questions regarding possible disciplinary actions taken against the two soldiers for the violation.

Obad-Mathis was AWOL for more than 30 days, which is when an AWOL soldier is dropped from the duty roster and declared a deserter, an Army personnel spokeswoman told Stars and Stripes in January.

It is unclear why the soldiers left their post together or why they were gone for weeks. Carin Obad, the mother of Obad-Mathis, told Stars and Stripes on Wednesday that the Army instructed family members not to discuss details about the incident with news reporters.

“They wanted to go on an adventure and it got away from them a little bit,” Obad said, adding she was happy about the safe return of her son.

She declined to give specifics about where the two soldiers had been, citing the Army’s request to offer few details, though she did say they were not in Mexico. One bridge crossing into Juarez, Mexico, is about four miles from the Fort Bliss visitors’ center.

The disappearance of the two soldiers ignited criticism of the often confusing ways commanders and police officials work together to find AWOL troops. There is no military equivalent to a missing person report, which triggers investigative resources such as phone tracking after 24 or 48 hours of a reported disappearance, and the jurisdictions between military and civilian law enforcement do not allow for close collaboration, Obad and other critics have said.

“We couldn’t access [Obad-Mathis’] bank account or track his last steps. A lot of things that could happen couldn’t happen,” Obad said, describing the limitations of what she could do with police without a missing person report.

The Army Criminal Investigation Command, commonly known as CID, launched an investigation shortly after they were informed of the incident nearly two weeks after it began, Stars and Stripes reported.

“Your leadership in his company is horrendous and we would like someone to step up and find our son,” Obad said in a Facebook posting Dec. 28, apparently criticizing her son’s commanders at Fort Bliss.

Obad said she did not see Army officials or the police take the issue seriously until reports on their disappearance and subsequent lack of investigation surfaced in the media.

There were 88 cases of AWOL soldiers at Fort Bliss last year, with 47 classified as deserters out of a total population of 34,000 troops, said Gilbert Telles, a Fort Bliss spokesman.

"The efforts we take to look for soldiers consume considerable resources. Our Army is smaller now than it's been since before WWII, and we are busier than we've ever been,” said Col. Thomas Veale, a spokesman for III Corps, which oversees the 1st Armored Division.

Maggie Haswell, a former Air Force security forces specialist who volunteers to search for missing troops and veterans, said Wednesday that she was relieved to hear the soldiers were safe and alive, but said the incident illustrated broader issues of how the services look for missing troops.

“By declaring someone AWOL, the chain of command is saying we’re not putting forth the resources,” Haswell said. “There is no effort toward looking for them.”