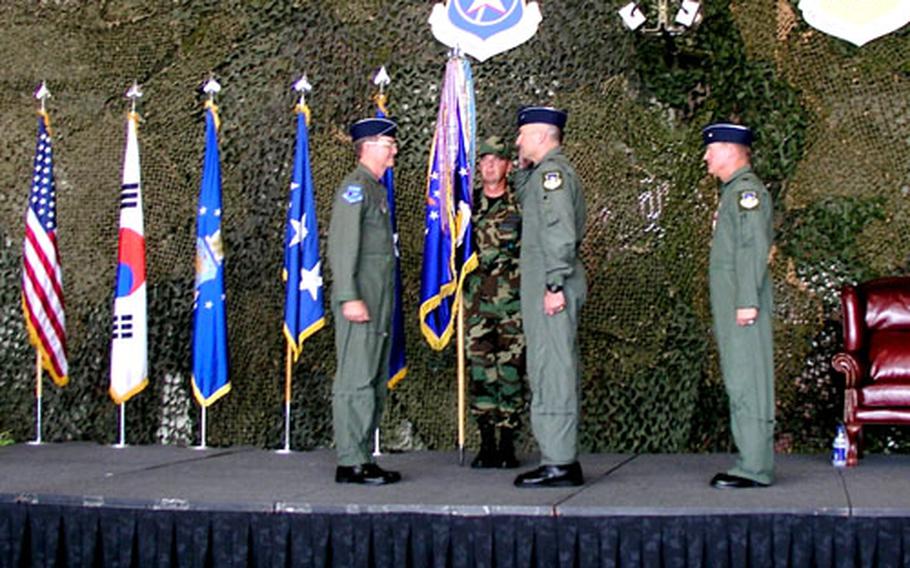 OSAN AIR BASE, South Korea &#8212; In a ceremony tinged with unit pride and a departing commander&#8217;s emotion, Brig. Gen. Maurice H. Forsyth bade farewell Friday to the 51st Fighter Wing here, which he commanded for 21 months.

Command of the wing, known as the &#8220;Mustangs,&#8221; passed to Brig. Gen. Joseph Reynes Jr., (pronounced ray-NESS) who previously served as executive officer to the commander, U.S. Central Command, at MacDill Air Force Base, Fla.

Forsyth moves to the Pentagon&#8217;s J-3 section as deputy director of global operations.

The ceremony also was the occasion for two special awards: an Air Force Outstanding Unit Award for the wing and the Legion of Merit, for &#8220;exceptionally meritorious conduct in the performance of outstanding services,&#8221; for Forsyth.

The ceremony began shortly after 10 a.m. inside a 5th Reconnaissance Squadron compound hangar, after the Republic of Korea Air Force Band played &#8220;The Washington Post&#8221; march and &#8220;The Stars and Stripes Forever.&#8221; Wing members stood in formation across the hangar floor as the gray F-16 jet assigned to the wing commander sat parked outside.

In farewell remarks, Forsyth said that &#8220;21 months ago, I stood in this very hangar and told you how my first images of the military were color slides that my father showed me of his time in this great country some 52 years ago.

As Forsyth neared the end of his remarks and was welcoming Reynes &#8220;to the Mustangs of the 51st Fighter Wing,&#8221; a distinct note of emotion came suddenly into his voice.

Reynes in his remarks said his new assignment was &#8220;like coming home,&#8221; noting he had served with the 8th Fighter Wing at Kunsan Air Base in South Korea, and also had spent duty time at Osan earlier in his career.

Reynes graduated from the U.S. Air Force Academy in 1978 with a bachelor&#8217;s degree in military history. A command pilot with more than 3,400 flying hours, he&#8217;s held a variety of command and staff assignments, including duty at the Pentagon.

It also cited the wing for supporting troop deployments to operations Enduring Freedom and Iraqi Freedom and said the wing &#8220;instituted numerous quality of life programs with the largest military construction program in Osan Air Base history.&#8221;